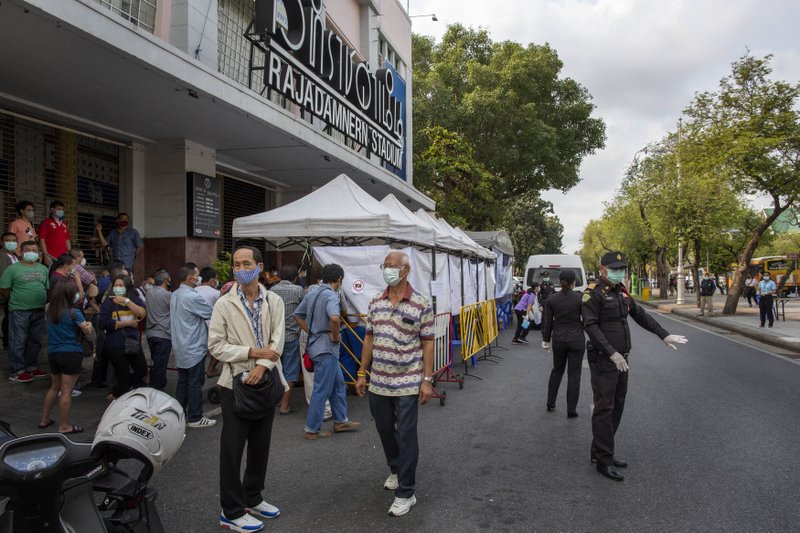 In this Thursday, March 19, 2020, photo, Muay Thai boxing fighters and officials gather at a makeshift screening facility outside Rajadamnern boxing stadium in Bangkok, Thailand. Kickboxing aficionados came from all over Thailand to attend a major Muay Thai tournament at Bangkok's indoor Lumpini Stadium on March 6, 2020. Dozens or more went home unknowingly carrying the coronavirus. For most people the new COVID-19 coronavirus causes only mild or moderate symptoms, but for some it can cause more severe illness. (AP Photo/Gemunu Amarasinghe)

BANGKOK -- Kickboxing aficionados came from all over Thailand to attend a major Muay Thai match at Bangkok's indoor Lumpini Stadium on March 6. More than 100 went home unknowingly carrying the coronavirus.

The wayward boxing fans led an inevitable rise in infections this month that forced the government to abandon its hesitant approach to combating covid-19 that failed to inspire public confidence.

Thailand's capital imposed a partial shutdown beginning today after cases surged past 400 with a rising number of people in critical condition.

Malls in Bangkok will be closed, and shops offering food and essential services will be among the few that can remain open, Bangkok Governor Aswin Kwanmuang said in a briefing Saturday. The restrictions will last from today to April 12, he said.

As of Saturday, confirmed cases from three boxing stadiums in Bangkok totaled 104, just over a quarter of the national toll of 411. An actor, a major-general, a politician, a boxing trainer and a slew of fans are among the coronavirus cases from the March 6 event.

It's feared hundreds more in all corners of the country could be viral time bombs. Health officials take the threat seriously.

Schools and universities, along with many entertainment and recreation venues, were shut last week in Thailand, and the government of Prime Minister Prayuth Chan-Ocha said it is prepared to take further action.

"We're ready to announce the most intense measures when the time comes," Narumon Pinyosinwat, a government spokeswoman, said in a statement late Friday. "The administration's priority is ensuring the safety of Thai people."

Thailand reported 89 more infections Saturday, taking the total to 411, with seven people in critical condition, according to the Health Ministry. Officials said there's now a severe shortage of testing materials for covid-19 as suspected cases spike.

Thailand is one of a number of Southeast Asian nations to see a recent jump in infections.

Even a crackdown implemented this week on arrivals sends a mixed message. Instead of banning international flights, as several nations have done, foreign visitors must have health certificates affirming they are free of the virus. The requirement is impractical, because in many if not most countries, it's hard to even get tested without showing symptoms of the illness.

Any illusion that Thailand would somehow avoid a spike in infections was dispelled this month with the discovery of a cluster case from a single discrete source. The infected people were a group of millennials who were reported to have been partying at an upmarket Bangkok nightspot with a visitor from Hong Kong. Health authorities scolded the partygoers for sharing drinks and cigarettes.

Just days later, a local celebrity in Muay Thai circles posted a message on his Instagram account. Muay Thai is the national sport, with a devoted fan base nationwide spanning social classes.

"This is NOT a joke, for those that have been in close contact with me the last few days please take precautions. I have the Covid-19 virus #covid 19," said the March 13 message from Matthew Deane Chanthavanij, next to a video of him wearing a black surgical mask.

Some people initially derided his post as a publicity stunt, bogus information for which he could be criminally prosecuted. In fact, it exposed a second, potentially more dangerous cluster: the Lumpini Stadium boxing crowd.

Matthew Deane, as he is usually called, is an actor, model, singer and athlete. The Australian-born 41-year-old is also a serious devotee of Muay Thai, and even owns a boxing gym.

He was a master of ceremonies at the Lumpini Stadium match, stepping into the ring to interview boxers and promoters and hand out prizes to winners of a raffle.

Information for this article was contributed by Tassanee Vejpongsa, Grant Peck and Busaba Sivasomboon of The Associated Press; and by Anuchit Nguyen and Suttinee Yuvejwattana of Bloomberg News.