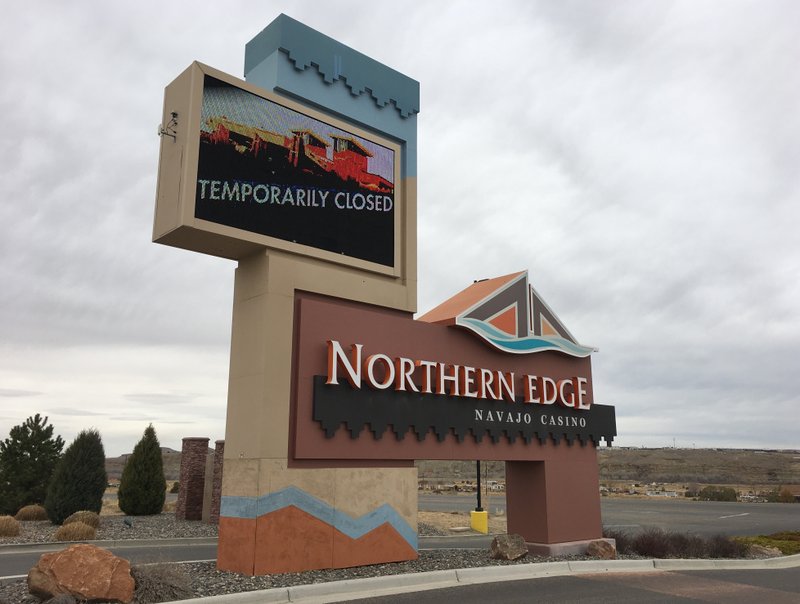 This photo taken March 17, 2020, shows the Northern Edge Casino in Upper Fruitland, New Mexico, on the Navajo Nation. Tribes across the country have closed casinos to help slow the spread of the new coronavirus. In the U.S. Southwest, the leader of the Navajo Nation restricted travel for employees who answer to him and wrote letters to federal officials saying anyone pulled away from duty at federal health care facilities on the vast reservation wouldn't be welcome back for 45 days. (Noel Lyn Smith,The Daily Times via AP)

FLAGSTAFF, Ariz. -- Officials of the Navajo Nation, the largest Native American reservation, on Friday broadened a stay-at-home order from Chilchinbeto, Ariz., to the entire reservation -- no visitors in, and residents can't leave their homes except for essential tasks, including to get food and medical supplies.

The order is among the strictest yet in Indian country, though tribes across the U.S. for weeks have been preparing amid worries that the coronavirus outbreak could quickly overwhelm a chronically underfunded health care system and affect a population that suffers disproportionately from cancer, diabetes and some respiratory diseases.

Tribes have shut down casinos, hotels and tourist destinations -- often their primary revenue sources -- and reminded citizens of the resiliency of their ancestors.

"Tribes are really just big families in a lot of ways," said Matthew Fletcher, a law professor at Michigan State University. "The threats to your family are something you're going to take seriously."

Tribal elders, revered for their knowledge and cultural guidance, are the biggest concern, and outreach and other efforts are underway on the Navajo Nation, which spans three states in the U.S. Southwest. Many families there live miles apart in homes that hold multiple generations but can lack electricity, running water and reliable internet.

A federal funding package in response to the virus included $40 million for tribes for epidemiology, public health preparedness, infection control, education and other things.

But the money hasn't reached tribes because there's no mechanism for the Centers for Disease Control and Prevention to get it to the Indian Health Service, the agency responsible for providing primary medical care to Native Americans. Tribes and tribal organizations run some hospitals and clinics under federal contract.

"Everyone is on high alert right now. They're waiting; they're asking us," said Stacy Bohlen, executive director of the National Indian Health Board. Bohlen is from the Sault Sainte Marie Tribe of Chippewa Indians.

In Montana, the Northern Cheyenne and the Crow tribes enacted a 10 p.m. curfew, partly to ensure law enforcement authorities aren't bogged down, and restricted movement on and off their land. They also asked residents who attended hugely popular basketball tournaments off the reservation to self-quarantine.

The Bay Mills Indian Community has special hours for the elderly at a grocery store on the densely populated reservation in northern Michigan and a gas station with full service to limit exposure to the pumps, said tribal Chairman Bryan Newland.

It has also closed casinos and is paying its 400 employees. The National Indian Gaming Association has asked Congress for at least $18 billion in federal aid over six months to address shortfalls from closing casinos, which tribes depend on because they don't have a property tax base.

Tribal leaders say all tribes are at risk, but some face unique situations. Of the country's 574 federally recognized tribes, 229 are in Alaska, where supplies must be flown in or shipped on barges.

The Navajo Nation had at least 14 confirmed cases as of Friday evening. Others have been confirmed at health care facilities for Native Americans in the Portland, Ore., area and in the Great Plains. The Cherokee Nation of Oklahoma said one of its citizens has died from covid-19.

Bills in Congress seek to create parity for tribes, giving them direct access to a federal drug repository and gear if they exhaust their supplies, as well as the ability to apply directly to the CDC for a health emergency preparedness program. A federal funding package signed Wednesday gives $64 million to the Indian Health Service.

Information for this article was contributed by Stephen Groves, Paul Davenport and Rachel D'Oro of The Associated Press.