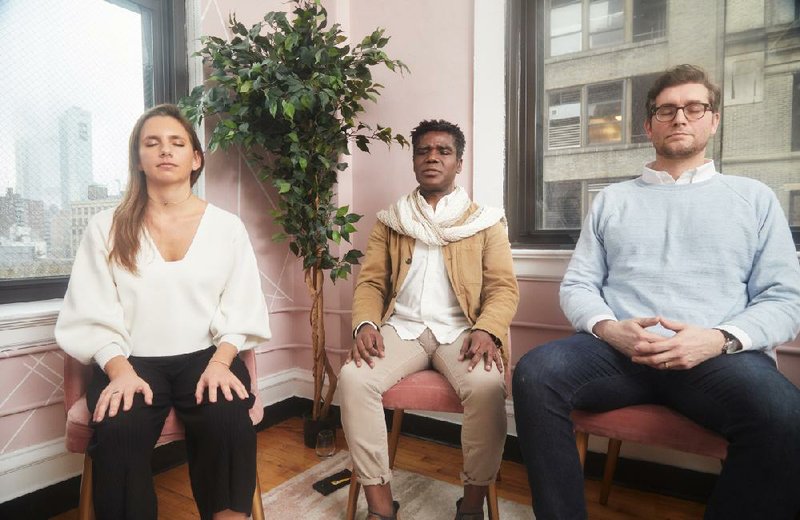 Thupten Phuntsok (center) leads a guided meditation at WayUp with Cassandra Bianco and Daniel Ryan in New York on Feb. 13. All three are part of a wellness-consulting network called Wellbeings. (The New York Times/Andrew White)

NEW YORK -- On a rainy Thursday afternoon, in a plush pink conference room in Manhattan, a group of colleagues formed a meditation circle. As they sat in their own silence, sirens and traffic wailed below. "Bathe in the joy of truly loving yourself," a former Tibetan Buddhist monk advised them.

They bonded over their challenges with sleep and overworking. At the end of the session, one employee mentioned his chest feeling less tight; another described a pinch in her back dissipating.

"That was awesome," said Brandon Santulli, the office manager at WayUp. It was his first time meditating. "I feel very energized now," he said, "and that's not usually how I feel until I get another cup of cold brew."

As companies have stressed the importance of work-life balance and mental health, and a younger, more open-minded workforce has joined their ranks, wellness initiatives have increased nationwide.

These optional activities, often scheduled during company hours, include basic meditation and yoga, as well as vision-boarding (creating a collage, essentially), energy consulting, sound baths and hypnotherapy. They are meant to be restorative and instructive, without veering too didactic. And they're not peculiar to millennial-led startups: Multinational corporations, restaurant owners and federal government agencies are among the employers calling for more wellness in the workplace.

"No one wants to sit down for an hour and be lectured about stress management," said Cassandra Bianco, the founder of Wellbeings, a network of corporate wellness consultants who, in addition to leading the meditation workshop at WayUp, has performed cacao ceremonies for Spotify and hosted an intuitive eating course at the Wing, a co-working space and social club for women. "They want to sit for an hour and feel de-stressed."

The ultimate purpose is to encourage a corporate culture that takes a more holistic approach to employee well-being and embraces imperfection in the daily grind.

"I've seen firsthand what five deep belly breaths before a meeting can do," Bianco said.

Roughly two-thirds of full-time workers experience burnout on the job, according to a 2018 Gallup study of nearly 7,500 employees. Another study, by Deloitte, found that nearly 70% of respondents thought their employers weren't doing enough to prevent or reduce burnout, with 21% of employees stating that their organization didn't offer any programs to assist in minimizing burnout.

Some companies are approaching the problem from a wellness perspective, encouraging employees to free their minds of work from time to time and to be more open about their challenges.

In January, Gympass, a corporate fitness platform, hosted a new-year workshop at the company's New York office ("Manifest Your 2020 Goals and Visions") that paired a vision-boarding exercise with meditation.

Employees discussed their aspirations for the year -- professional and personal -- then created visual aids reflecting their goals. One employee included her hopes of adopting a dog on her board. Some have since hung their vision boards up at their desks.

"With this kind of activity, you first look internally," said Lívia de Bastos Martini, the chief human resources officer of Gympass. "You stop and think about yourself, which is something you don't have time to do on a day-to-day basis, then you focus on somebody else, and the exchanges are much more meaningful."

Sometimes wellness experts are called upon in moments of crisis.

Last fall, Jesse Israel, a meditation teacher who is on tour with Oprah Winfrey and whose clients include Coca-Cola and Ford, was brought in by a "big retailer that recently went bankrupt," he said, to lead a session during a companywide meeting.

"The employees were really freaked out about their future, there was a really heavy energy in the room, and the company was really going through it," Israel said. "I did a keynote talk about toxic stress and stress culture, and I led a meditation."

During the session, he recalled, the owner of the company "got so deep in the meditation that the CEO had to go over to him and shake him when the time was done because his body was so exhausted by what he was going through."

Exhaustion, Israel said, is common among employees. "What I see more than anything is the pathway to burnout," he said. "People know that they're stressed and they don't do anything about it."

Mindfulness and stress management have been top of mind in the past few years for Sonya Luisi, the corporate wellness manager at Flik Hospitality Group, which provides food service and wellness programs for businesses.

Earlier in the winter, she introduced employees at a major pharmaceutical company's campus in Gaithersburg, Md., to sound baths. "Before the class, people were like: 'What is a sound bath? I don't understand,' " Luisi said. "Since the new year, I've had a good handful of people ask me when the sound bath was coming back."

But the success of wellness practices also relies on the willingness of employees and top leadership to integrate these values into their company culture.

Maryam Ajayi, who runs workshops that blend breath work, human resources principles and mindfulness techniques through her company, Indagba, echoed that sentiment. "There's people that don't understand it and will not come anywhere near it," she said. "But most people, especially with the epidemic of burnout, they're like, 'I'll try anything.' They are sick of being sick."

A common criticism of workplace wellness programs is that they offer a superficial solution to more deeply rooted institutional problems, including a 24/7 work culture, unmanageable workloads and unpredictable schedules.

Most wellness programs have "limited if any effectiveness," said Jeffrey Pfeffer, a professor of organizational behavior at the Stanford Graduate School of Business.

In virtually every aspect of life, including employee health and medical interventions, "prevention is almost always much more effective, and cost effective, than treatment," he said.

According to Pfeffer, fundamentally redesigning jobs to improve upon employee health and performance would be a more useful practice in the long term. "Instead of stress reduction workshops or meditation, reduce stress," he said. "Instead of nap pods, give people the opportunity to get enough sleep."

On the other hand, wellness practices in a workplace setting may also be the only place where employees have access to them, said Monica Worline, a research scientist at the Center for Compassion and Altruism Research and Education at Stanford.

Worline, who is also the chief executive of EnlivenWork, a company aimed at improving workplaces through research-based tools developed by academics, said there was mixed evidence on the efficacy of workplace wellness programs. The most valid research, according to her, tends to deal with "the teaching of mindfulness, meditation and other techniques that help people in work settings to calm down their minds and refocus their attention."

Another trap many organizations fall into is believing that the introduction of a mindfulness program can make up for significant underinvestment or inattention to employees' actual working conditions, Worline said.

She recalled visiting a "major hospital system" to help with a unit of doctors who were dealing with an increasing error rate in their work. After she ran a session for the team focused on compassion and "restoring meaning to medicine," she discovered that the unit was short seven staff members and many employees were working double shifts.

"They very rightly said to me, 'You could sit here and talk to us about compassion all day long, it's not going to make a difference in our stress levels,' " Worline said. "No wellness management is going to work until you fix the working conditions for people there. In that case, wellness programs were a Band-Aid over a gaping wound."

Still, Israel, the meditation expert, is confident that as stress levels in the workplace increase, so will the demand for this kind of programming. Last year, at a hospitality design conference in Hollywood, Florida, he presented in front of hundreds of people from the industry.

"Ninety-five percent of the people in the room had never meditated or done any of this before, and it was risky for the organizer to book me, but people loved it," he said. "In these more traditional spaces where people are not in New York or Los Angeles, they're starting to open up to this stuff."