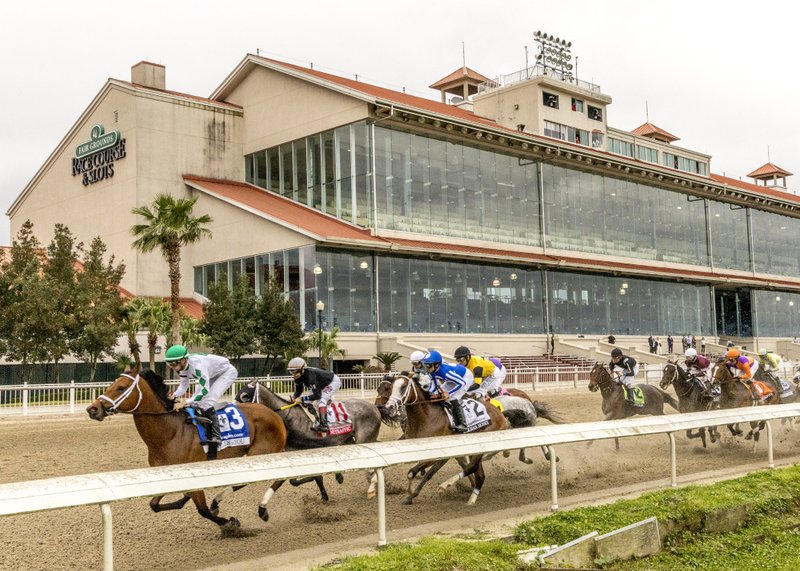 NEW ORLEANS -- As Wells Bayou completed a wire-to-wire victory in the $1 million Louisiana Derby, there was hardly a cheer to be heard -- other than the isolated triumphant shouts of trainer Brad Cox and his stable crew.

In the 107th running of the major prep race for the Kentucky Derby, the clubhouse and grandstand at Fair Grounds Race Course were empty and eerily quiet because of crowd restrictions related to the coronavirus pandemic. There was no crowd noise to rival the echoing voice of track announcer John G. Dooley -- just the sound of 56 hooves clopping down the stretch.

Winning jockey Florent Geroux had noted the bizarre scene during earlier races on what is normally the busiest day of the year at the Fair Grounds, drawing crowds approaching 10,000.

"It's funny because it's the biggest day of the meet here and its completely empty," Geroux said. "It's like playing football in the Super Bowl with an empty stadium."

Kind of like New Orleans without open bars or live music clubs, which has been the case since early last week.

On Saturday, the Louisiana Derby was one of the few U.S. sporting events to continue as scheduled, one day after New Orleans Mayor LaToya Cantrell had issued a "stay home" mandate to residents in an effort to curb the spread of the virus. Shortly after the race, officials announced that the rest of the meet, which was scheduled to run until March 29, was canceled.

For the overwhelming majority of race fans and bettors, the only option was to bet online and watch on television.

Some die-hards just couldn't be kept away, though. A couple dozen people parked along a chain-link fence with a view of the front stretch, watching tailgate-style, with drinks in hand. Some stood in the beds of pickup trucks for a better view while others peered through the fence.

"I've only been coming to this for about 50 years," said 65-year-old Ken Carson, who lives near the track. "I've never really bet online but this is the first time I ever opened up an account for at least one day to come out and enjoy the spectacle and, you know, make a little bet here or there.

"It's a pleasant day," Carson added, a can of beer in one hand and his racing form in the other. "We're just enjoying ourselves out here."

Carson said the horse he liked was NY Traffic, which went off at 26-1 but finished second, staying close to the leader throughout. Modernist finished third while morning-line favorite Enforceable, who went off at 7-2, finished fifth.

Wells Bayou earned 100 points toward qualification for the Kentucky Derby, which has been delayed until early September from its usual running on the first Saturday in May.

"He's very great leaving the gate. He broke super sharp," Geroux said. "After that, when he makes the lead, he relaxes very nice. I let him take a few breathers around the turns. He did perfectly. And when the competition came next to him down the lane, he has another gear."

"The first Saturday in September is a long ways away," Geroux said, referring to the tentative new date for the Kentucky Derby. "Many things can happen. We're just hoping the horse comes back healthy and we're going to adjust and go from there."

"The last couple races he really stepped up to the plate and the horse is just getting good," said Bravo, a race-day fill-in for jockey Luis Saez, who decided not to travel to New Orleans. "The thing that makes him so good is that he listens. He broke great, put him in front, he relaxed off the other horse. He turned for home and my horse did not want to lay up. He ran for me down the lane and that's all you can ask for."