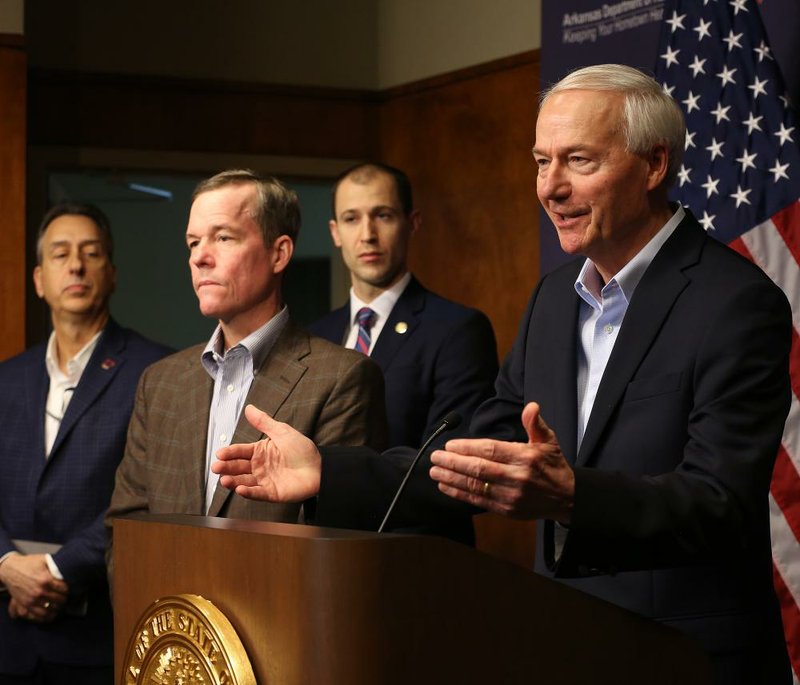 MONDAY UPDATE: The number of cases in Arkansas has risen to 168. Click here for full details: arkansasonline.com/news/2020/mar/23/march-23-update-case-total-increases-168/

The number of Arkansans testing positive for the coronavirus reached a new one-day high Sunday as the total number of cases in the state reached 165, including 35 residents of a Little Rock nursing home.

Between Saturday and Sunday afternoon, the total number of positive cases reported by the state Department of Health increased by 47.

A total of 44 nursing home workers and residents have tested positive in the three nursing homes the state is investigating, said Dr. Nate Smith, director of the Department of Health.

[Video not showing up above? Click here to watch » https://www.youtube.com/watch?v=85wwopPf-SI]

Briarwood Nursing and Rehabilitation in Little Rock has the greatest number of cases, with 35 residents and six staff members testing positive.

That's up from 10 residents and four staff members who had tested positive as of Friday.

The other two affected facilities are The Villages of General Baptist West in Pine Bluff, where two residents have tested positive, and Apple Creek Health and Rehab in Centerton, where one resident tested positive.

The state is in the process of testing all the residents and staff at all three nursing homes, Smith said.

"They are really on the front lines as much as doctors and nurses in the hospitals," Smith said.

People have tested positive for the virus in 30 of the state's counties, including four -- Columbia, Conway, Union and Woodruff -- that were added to the list Sunday.

The largest number are in Pulaski County, where the cases increased by 24, to 52, on Sunday.

Each of those counties was listed as having one to four cases Saturday. That's the same category the other 24 counties with cases were listed in Sunday.

The new cases included one child or teenager 18 or younger, and 30 people 65 or older. That brought the number of children or teenagers up to age 18 who have tested positive to 10 and the number age 65 or older to 62.

Nineteen of the people in the state who have tested positive so far have been hospitalized, including 12 who have been in intensive care and six who have been on a ventilator, Smith said.

Women have made up 61% of the cases. Seventy percent are white, 18% are black and the rest were other races, he said.

Smith said the number of tests reflected a "tremendous increase in lab capacity" at the Health Department, which at one time could test just five or 10 cases per day.

The lab staff has "been working around the clock very hard and will continue to build our capacity there," Smith said.

The University of Arkansas for Medical Sciences also plans to begin its own tests today, with hopes of eventually being able to test samples from as many as 700 people a day.

While testing is ramping up, Hutchinson said the state is struggling to replenish its dwindling supply of N95 respirator masks and other protective gear for health care workers.

Last week, the state received a shipment of equipment from the U.S. Department of Health and Human Services' Strategic National Stockpile, including 27,880 respirator masks and 66,500 surgical masks.

That amounted to 25% of what the state requested, and it "will soon be used up," Hutchinson said.

Although the governor has allocated $30 million from the state's budget stabilization trust fund to buy more gear, the state is competing with other states and foreign countries.

"Our procurement team tells me that the supply is bottlenecked," Hutchinson said. "The supply is just not sufficient domestically. We're looking at internationally. We're looking at manufacturing our own to the extent we have that capacity, and we're working with [the Federal Emergency Management Agency] to release more of the Strategic National Stockpile to Arkansas."

But he stopped short of calling for the federal government to take over procurement from the states, as New York Gov. Andrew Cuomo did Sunday.

"It's very clear to me that the federal government has said we don't want to invoke the National Defense [Production] act, and therefore as long as they don't invoke that, then we're up to our own devices to procure that," he said.

Hutchinson said he will also seek legislative approval to use $1.1 million in rainy day funds for upgrades to unemployment systems to handle the high number of claims.

Amid the economic downturn brought on by the pandemic, he said an estimated 8,000 to 10,000 Arkansans have filed unemployment claims in recent days.

"As we look at those claims, they are something that we have never seen before in really my lifetime, in which we've had this kind of global economic downturn to the extent that we have," Hutchinson said. "Our system wasn't designed for this."

A new hotline that Arkansans can call for help with unemployment benefits goes live today. The number is (844) 908-2178.

When asked if he would seek restrictions on evictions in light of the economic uncertainty many people face, Hutchinson said the state would monitor the situation but did not feel it was necessary at this time.

"What I see is businesses understand the tough times and they're being reasonable about it, they're trying to make accommodations, a number of suppliers and businesses have already indicated that, and I applaud them for it, and so I don't see any consideration for actions like that, unless it becomes a serious problem, and I don't see that at this point," Hutchinson said.

Smith said the Department of Health plans to step up its public education efforts, allotting $400,000 for public messaging.

"This is so new," Smith said. "Many of us have been dealing with this nonstop for the last two weeks or so, but many Arkansans, it's still new for them."