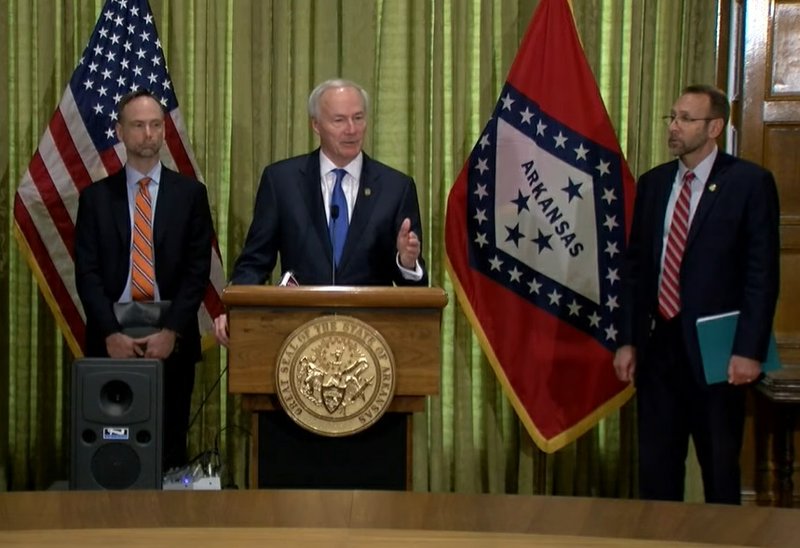 The number of positive cases of covid-19 in Arkansas increased Monday evening to 201, an increase of four since earlier in the afternoon.

The Health Department had reported 197 positive cases as of 4:50 p.m.

The number of positive cases of covid-19 in Arkansas jumped again Monday afternoon to 197, an increase of 23 since earlier in the day.

The Health Department had reported 174 positive cases as of 2:30 p.m.

The Arkansas tax filing deadline for individuals will be moved to July 15, Gov. Asa Hutchinson said Monday at a news conference where he also announced he will call a special session of the legislature to deal with budget shortfalls tied to the coronavirus pandemic.

Moving the deadline for individuals is intended to provide relief for Arkansans financially strapped by the economic effects of the virus' spread and to simplify the tax filing process after the federal government extended the filing deadline to the same date, Hutchinson said.

Extending the deadline past the end of the fiscal year in June contributes to a projected $353 million shortfall for the state budget, he said.

Lawmakers will be called back into session in the coming months to find cuts to make in the budget, but Hutchinson said no date has yet been set.

He said priority will be given to preserving the budgets of agencies on the frontlines of coronavirus issues, including the Department of Health.

At the same news conference, Health Secretary Dr. Nate Smith said 5 patients diagnosed with coronavirus in Arkansas have recovered and are the first in the state to do so.

The total number of cases remained at 174, a figure released by the health department earlier Monday.

At least 174 cases of coronavirus have been reported in Arkansas, according to the state Department of Health.

The total is an increase of six from numbers reported on the agency’s website earlier Monday.

Arkansas Gov. Asa Hutchinson and health officials plan to provide an update on the spread of coronavirus in the state during a news conference at 2:30 p.m.

Check back for further updates, and use the video player below to watch Hutchinson's news conference:

This story was originally published at 10:18 a.m.