Repairman proved solid as a rock; Spoofer’s Stone back in service as UA landmark 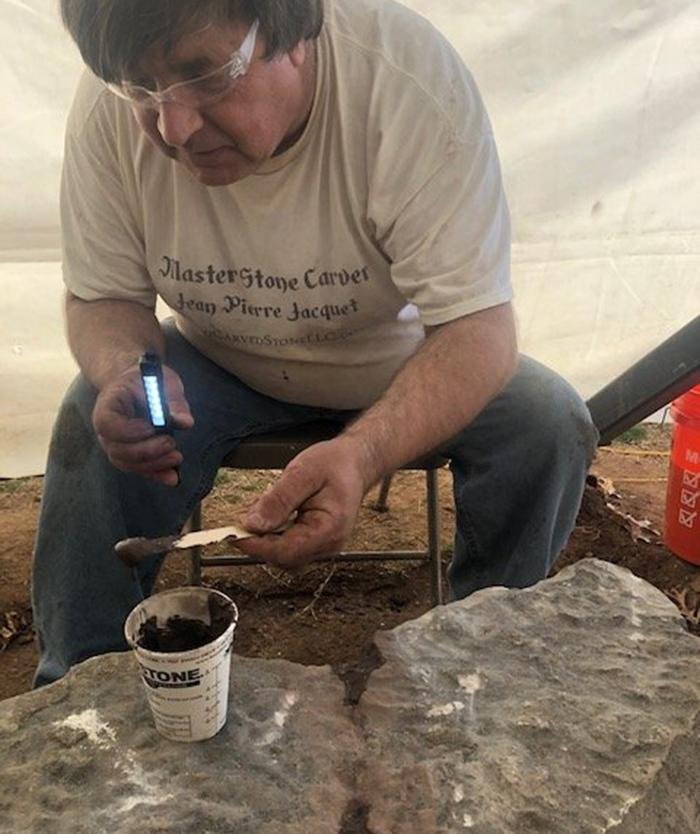 Master stone carver Jean Pierre Jacquet prepares an epoxy to re- pair the Spoofer Stone on the campus of the University of Arkan- sas, Fayetteville. More photos at arkansasonline.com/322spoofer/. (Special to the Arkansas Democrat-Gazette)

FAYETTEVILLE -- Not everything in pieces can be put back together, says Jean Pierre Jacquet, a master stone carver with Wisconsin-based Quarra Stone.

Jacquet was called upon to examine Spoofer's Stone -- one of the oldest landmarks on the University of Arkansas, Fayetteville campus -- after it broke apart when hit by a work truck Feb. 25.

"Everybody was upset," said Matt Bodishbaugh, a vice president for CDI Contractors LLC, the company overseeing the subcontractor that damaged the stone.

The university announced the damage while also vowing to study repairing the landmark, which is known as a spot for many a marriage proposal over the years.

The hunk of limestone's unique place in campus lore began almost with the founding of the university. The rock came to rest on the lawn of Old Main after a broken oxcart dumped its load during the construction of what's now the oldest building on campus, according to the university's website.

The Old Main academic building, whose exterior was completed in 1875, three years after UA first held classes, may be far more recognizable to most. But the nearby Spoofer's Stone, in UA's early years, served as an important drop-off point for romantic notes between students in an era when the men and women of the student body weren't allowed to mix freely on campus.

Jacquet, a craftsman who studied historic restoration in France, said he had to see for himself before understanding whether he could make the stone whole again.

"It did take some inspection from us; we were not sure," Jacquet said. "We went down to look at the stone. When I looked at it, I was pretty confident I could."

Jacquet and a helper from Quarra Stone, which is based in Madison, Wis., spent a week working in what was basically a tent on the Old Main lawn, he said.

CDI -- which hired Quarra Stone and paid for the repair -- provided the shelter and a small crane to lift the stone, which Jacquet estimated to weigh about 3,800 pounds.

"It is still a very, very hard stone, very strong and very dense. So it's very brittle, in a way," Jacquet said, explaining that "the more dense the stone is, the more easy it is to shatter like glass."

Normally, Jacquet works on larger-scale projects, including Longwood Gardens, an estate in Pennsylvania that in recent years has been extensively restored.

Bodishbaugh, the construction company vice president, declined to say how much the repair cost.

Techniques used in other projects also can be used when repairing something like Spoofer's Stone, Jacquet said, referring to what's technically called anastylosis, a type of reassembly.

"It's a little bit like when you have pottery broken and you put all of the pieces back together," Jacquet said. "You have to find out where the pieces were fitting and catalog them, see how they were fitting together, and put them back together with very strong epoxy glue and some pins."

The goal is "to conserve as much of the original as possible," Jacquet said.

Spoofer's Stone had been set on a concrete slab, and examining the broken rock revealed how its underside was damaged from humidity, Jacquet said.

"I think it turned out great," he said of the finished product.

Thomas, the UA spokesman, said the stone is back in its original location but in recent days has been boxed up for protection from the wet weather.

Fencing keeps the public away as CDI Contractors continues with the work that was going on when Spoofer's Stone was damaged -- a project involving another UA landmark.

CDI is overseeing the replacement of the university's oldest sections of Senior Walk, a tradition that began with senior students inscribing their names in the concrete sidewalk by Old Main.

Bodishbaugh said that after the damage happened on a Tuesday, the restoration team was flown in the following Monday. The repair was done in 10 days, he said.

Bodishbaugh described how Spoofer's Stone was also damaged early on, with students chiseling away portions of it as keepsakes. He said repair work had been done on the stone in the 1930s.

The most recent repair is an improvement on the work done decades earlier, Bodishbaugh said.

"While we regret the incident happened, we are certainly pleased to be able to remedy the damage," he said.

Print Headline: Spoofer’s Stone back in service as UA landmark