Riding into the sunset 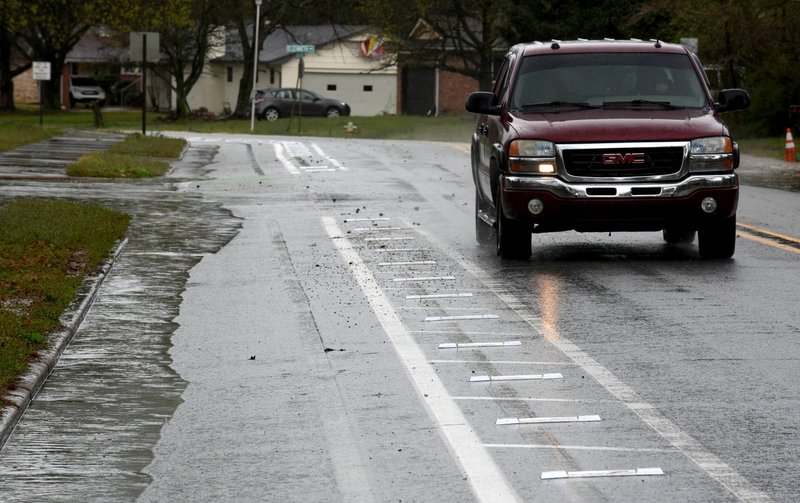 Reflector strips are visible Thursday marking the bike lanes on Rolling Hills Drive in Fayetteville. The city of Fayetteville's Transportation Division, removed bumpers and replaced them with the reflectors. Check out nwaonline.com/200322Daily/ and nwadg.com/photos for a photo gallery. (NWA Democrat-Gazette/David Gottschalk)

Two of the three cities participating in a pilot project to test protected bike lanes on city streets have dismantled the impediments or significantly downsized them.

The third city, Springdale, is awaiting results of a study on the project, but officials said they expect to modify the lanes.

The pilot focused on Fayetteville, Springdale and Siloam Springs. Protected lanes each covering about 1 mile on both sides of existing streets were painted and marked with raised lane designations called zebras. Zebras are heavy rubber pieces about 7½ to 8 inches tall that look like a combination of a speed bump and a curb, said Anya Bruhin, Washington County project coordinator for Bike NWA.

Plans were to install the three projects in the fall of 2018 to be studied until Nov. 1, 2019. Cities collected information on traffic counts, driving speed and more throughout the year.

BikeNWA hired Lane Shift, a company working to create bicycle and pedestrian networks, to help with the projects.

"Why does this mobility matter?" asked Ryan Hale, founder of Lane Shift, when the project was announced in 2018. "It's about being competitive for talent. The young folks are moving in for amenities in communities even before they have a job. They want a walkable environment."

BikeNWA was scheduled to present a draft report of the project's Springdale results Wednesday to the city Trails Committee, but the meeting was canceled because of the covid-19 virus.

Short rumble strips with reflectors have replaced the bumpers.

"The obstacle is going to feel like a rumble strip or like the reflectors you cross on the interstate when you change lanes," said Terry Gulley, the city's transportation services director. "There's a bump, but it's not going to impede the car from going over it.

"But it will wake you up, so you know you're in an area you shouldn't be in."

Justin Bland, the city engineer for Siloam Springs, said the city's Board of Directors voted to pull the bollards from most of the path, leaving painted arrows on the lanes.

The city left the bollards on the lanes adjacent to Twin Springs Park.

Bland said officials learned they need a side path along Harvard Street from Carl to Mount Olive that will accommodate bicyclists and pedestrians along with the cars. City directors allotted $620,000 in this year's budget for design and engineering work for the path.

Springdale has decided to wait for the project's report and the City Council's direction before making any changes to the lanes, said Brad Baldwin, director of engineering and public works for Springdale.

Chris Weiser, chairman of the city's Trails Committee, predicted the city would ask for public input before deciding on changes.

Baldwin thinks his city will "tweak" the design of the protected bike lanes. He likened the pilot project to scientists in a lab. "You tweak it a little bit, and then you try it," he said. "Instead of ripping them out, I'd like to see us back up and improve them," Baldwin said.

He thinks the lane stripes and bollards were just "too busy" for many drivers. He hopes removing some of the bollards and changing the orientation of others will provide a clearer road for drivers to travel. Baldwin also suggested the city might install curbing to mark bike lanes.

"People don't know about bollards, but they know about curbs," he said.

The city changed its Dean's Trail last summer, soon after construction finished, Baldwin said. Protected lanes along the path on Dick Smith Street were reduced to just one side of the street after residents complained about having no place for their visitors to park.

Fayetteville voters in April passed a transportation bond issue that will put about $8.5 million into drainage and street improvement projects, including along Rolling Hills Drive, said Dane Eifling, the city's mobility coordinator.

"We know that we want to get the bikes outside of the curbs. That much, I think, there was consensus on," he said. "Exactly how we do that, and other elements of the project, are still to be determined."

The city has some concepts on the future of the street posted to its website.

"The pilot project came along at a good time," Eifling said. "We got to see what a protected bike lane might be like on that street."

Roberts said members of BikeNWA were disappointed the level of protection provided by the lanes weren't made permanent. But seeing Fayetteville's plans, they have hope protective measures for bicyclists will be incorporated in street improvements.

City officials in Fayetteville, Springdale and Siloam Springs consider the project a success despite the modifications.

"The goal of the project was to learn and evaluate," said Eifling. "I think it was a success because it was always intended to be temporary. That we took it up is not a failure of the pilot."

The demonstration proved frustrating to both residents and city officials in Springdale. Baldwin chalked it up as "a learning experience."

The lanes were supposed to connect to the Razorback Greenway on the eastern end, but the city's extension of East Maple Avenue across the railroad tracks was delayed by the Arkansas & Missouri Railroad, Baldwin said.

The lanes also proposed an easy ride for bicyclists to get to the city's Murphy Park at the western end of the project. But the Arkansas Department of Transportation wouldn't let Springdale install the bollards and paint of the lanes across South Thompson Street as designed. Thompson Street is Arkansas 71 Business, so any projects must have department approval.

"It was kind of a road to nowhere," Baldwin said of the pilot. "The protected lane was a great idea that came along a little early."

All cities reported an increase in bicycle traffic, but not what was expected, officials said. Throughout the project, the cities collected traffic counts and speed on their pilot streets. Data for the pilot is unavailable because the cities turned it over to BikeNWA and Lane Shift.

"I'm still looking for it," said Ben Rowell of Lane Shift, of an expected increase in riders. Rowell was working Monday to compile data from Fayetteville.

Eifling noted BikeNWA didn't promise the cities increased bicycle traffic, nor was it the goal of the project.

Kathi Blundell lives on Maple Avenue in Springdale. She and her husband rarely see a cyclist in the lanes, she said. Blundell and her husband, Harry Blundell, said they were optimistic about the project when the protected bike lines were installed.

"I still think the same things I thought about it then -- and that's not good," she said last week.

One goal of the pilot project was to slow cars when driving next to cyclists, Roberts said. Taking about 5 feet of street space on both sides for the bicycle lanes left narrower streets for drivers.

"People don't like anything that slows them down," he said.

Blundell noted drivers had nowhere to pull over when emergency vehicles from Springdale Fire Department came down the street. Fire Station 1 sits near the intersection of Maple and Holcomb, which is part of the route.

Hans Driessenack, chief executive officer of Northwest Medical Center-Springdale, supported the project because the bike lanes were intended to slow traffic and make people more attentive, according to Beth Wright, a spokesman for the hospital. The hospital is along the project's route.

The route included several pinch points designed to narrow the road and slow drivers, he said. These points were marked with curbs and bollards. The city placed flowers in galvanized planters that looked like livestock watering troughs at the pinch points. The city planned the planters to create physical barriers so drivers would not run over the street infrastructure, and at the same time improve the aesthetics of the pinch points.

Fayetteville city officials also received complaints about the aesthetics of the pilot lanes "that we really couldn't ignore," Eifling said.

And cyclists complained drivers were pulling into the bike lanes to make turns.

"We expected some negative comments, but we didn't anticipate the inflamed callers," Roberts said.

Print Headline: Riding into the sunset