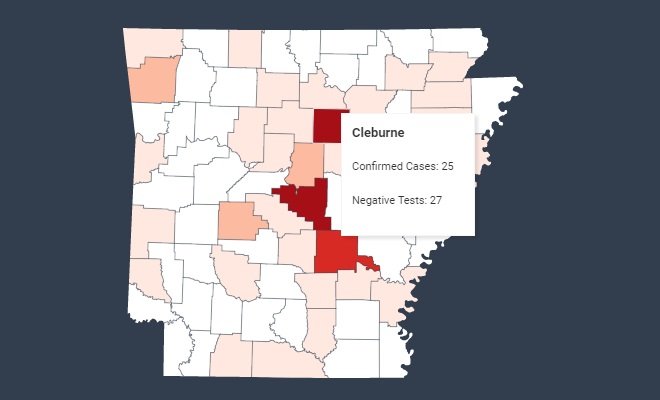 There have been 25 positive test results for covid-19 in Cleburne County as of Monday afternoon.

Nearly three dozen cases of covid-19 have been diagnosed in people who share a connection to a church in Cleburne County, while others at the approximately 80-member congregation have been tested and are awaiting results.

Donald Shipp, a deacon at Greers Ferry First Assembly of God, said Monday that 34 people who were at the church earlier this month for a three-day "Kids Crusade" event have since tested positive, including himself and his wife, Yvonne.

"You've got to be about as tough as it is," Shipp said of the virus, which has manifested itself through symptoms in his head, respiratory tract and stomach. "We are slowly but surely wearing it out."

The outbreak at the church explains why Cleburne County, a relatively small county, has registered the state's second-highest number of positive cases. It again shows how fast the contagious virus can spread among large groups, which government and public health officials have encouraged people to avoid.

"It appears, from what I know at this time, most of the cases that we have in our county" are related to the Greers Ferry church, said Jerry Holmes, county judge of Cleburne County, who restricted public access to county offices last week and shut off access completely as of Monday.

Shipp's count of 34 people is an updated count after reaching out to church members Sunday evening to check on them. Before then, Mark Palenske, the church's pastor, had said in a Facebook post on the church's official website Sunday that 26 people linked to the church had tested positive, including himself and his wife, Dena. The Palenskes could not be reached for this article.

Shipp said all but three of the people at the Kids Crusade were members or staff at the church. The three nonmembers who later tested positive for the virus were Thomas and Angela Carpenter, missionaries who had brought the three-day program to the church, and a child.

The Carpenters are listed as missionaries for Word of Grace Assembly of God Church in Hope on its website, and could not be reached at the church Monday.

"It was a beautiful time for the kids and for [the Carpenters]," Shipp said of the recent program. "They're beautiful people."

Arkansas Department of Health spokeswoman Danyelle McNeill said Monday there were "connections to travel with covid patients in Cleburne County."

Citing privacy reasons, McNeill did not disclose the number of Cleburne County residents who were either hospitalized or being monitored.

"A number of cases in that county have been associated with that church," McNeill said. "We are still investigating newly reported cases and can't definitively say they are all connected to that church."

One of Greers Ferry First Assembly's staff members had been sick during the event, which was advertised on a flyer reposted online by staff members as taking place March 6-8, and later tested positive for covid-19, Shipp said.

Mark Palenske said in a post on the church's official Facebook page Thursday that he and Dena were the first to test positive but that others had been sick before they were. He also said that even before their test results returned, the two self-quarantined in an attempt to prevent spreading the illness to others.

"[Covid-19] clearly made its way through a special weekend of children's ministry at our church," Palenske added.

"I think it was just bad timing," said Gracie Campbell, a member of Greers Ferry First Assembly. Campbell and her husband, Chuck, have been sick and have been tested and are among those awaiting results.

Cleburne County's median age of 48.9 is older than the statewide median age of 37.9, according to 2017 data from the U.S. Census Bureau. Elderly people and those who have underlying health conditions, such as autoimmune diseases, diabetes, high blood pressure and other preexisting conditions, are at higher risk of death than younger, healthier people, according to health experts.

According to Mark Palenske, the virus struck Dena particularly hard, sending her into a "seizure of sorts" last week, requiring hospitalization, but that she has since been released. Thomas Carpenter, Shipp and Campbell said, had been hospitalized and on a ventilator as a result of the virus, although both said they were unaware as to their current status Monday.

The Palenskes were 12 days past feeling the first symptoms associated with covid-19 on Sunday, and Mark Palenske added to his previous call to adhere to instructions given by area and federal health authorities.

"The intensity of this virus has been underestimated by so many, and I continue to ask that each of you take it very seriously," he wrote. "An act of wisdom and restraint on your part can be the blessing that preserves the health of someone else." 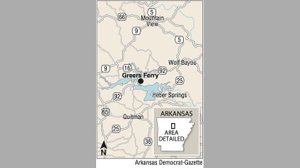 A map showing the location of Greers Ferry.