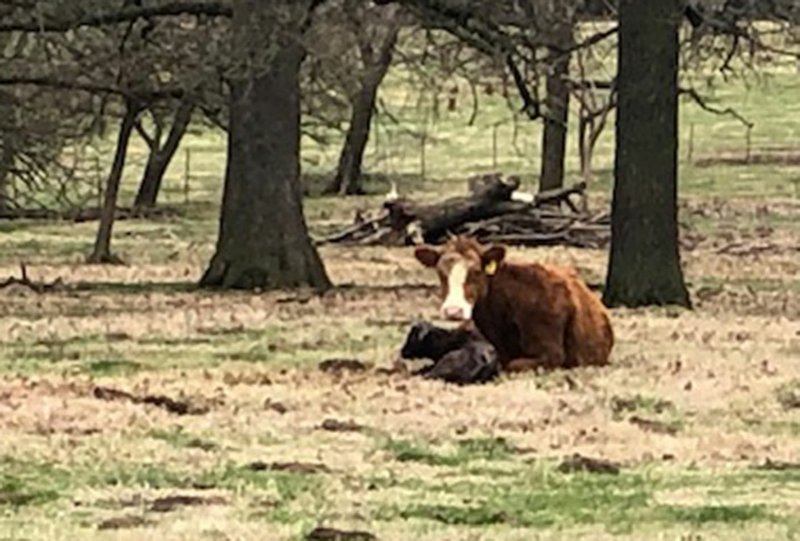 Momma cow and her newborn calf at rest in the pasture along the Razorback Greenway. (Courtesy photo)

Ah, but this was a special cow. There she was, her brown and white face all aglow, beaming as this brand new mother cow licked her newborn calf still wet from the womb.

The birth was a show stopper that Sunday beside the Razorback Greenway, two days before St. Patrick's Day. We were lucky as a four-leaf clover to see this jet-black calf moments after it came into the world 30 yards off the trail in the countryside of south Rogers.

This miracle of birth would have been so easy to miss as our Tour de Madison County bicycling group pedaled along with our eyes on the road. One of our riders noticed the calf on the ground, resting on its side.

It caught her eye because most of the cows we see along the greenway are standing up. Sometimes they're lying down, which in angling lore means the fish aren't going to bite that day.

We hopped off our bikes and rested our arms on a wooden fence to admire mamma cow and her calf.

"Welcome to the world!" one rider shouted. Then came a chorus of cow calls from grown adults standing there in bike helmets mooing away.

Every half minute or so, little calf would try to stand up for the first time in its life. It'd almost make it, then the little one would topple over sideways. Mom licked its shiny wet body some more. Little calf would try its legs again only to fall sideways the other way.

We cheered, "You can do it!" like we were spectators in the stands. Hey, this is about as close to sports as you can get these days.

While we watched, a young lady bike rider squeezed her brakes and joined us.

"I was by here 10 minutes ago and the calf was about halfway out," she said. That put our group's arrival in the first minute or two of bovine birth.

For me, this was the coolest thing I've seen in years of biking the Razorback Greenway every Sunday morning with our Tour de Madison County gang, weather permitting. Used to be our mantra was, "Thirty degrees and dry, we ride." Now we've updated that motto, raising the temperature bar about 10 degrees.

Among bikers on the greenway, I'll wager we're the slowest. You could count the number of riders we've passed over the years on one hand with some fingers left over. That's OK. We see more at our scenic pace.

One morning, two of our riders spotted a bobcat. The cat stayed put long enough they managed to get a picture of it.

The miracle of cow birth tops on my wow list, but I'll never forget the close second.

We're pedaling along and here comes a car motoring slowly right down the middle of the greenway. A bike rider was out in front of us and a kindly lady behind the wheel flagged him down. We coasted to a stop behind him.

"Young man, is this the way to Rogers?" she asked. Somehow she mistook the Razorback Greenway for a city street that ran close to the trail. I mean, who could blame her. The trail's got dotted lines down the middle like lots of roads do.

Our biker friend told her, "Yes ma'am, this is the way, but the road is over there."

Here it is only Tuesday, and I can't wait for Sunday. You never know what you're going to see.