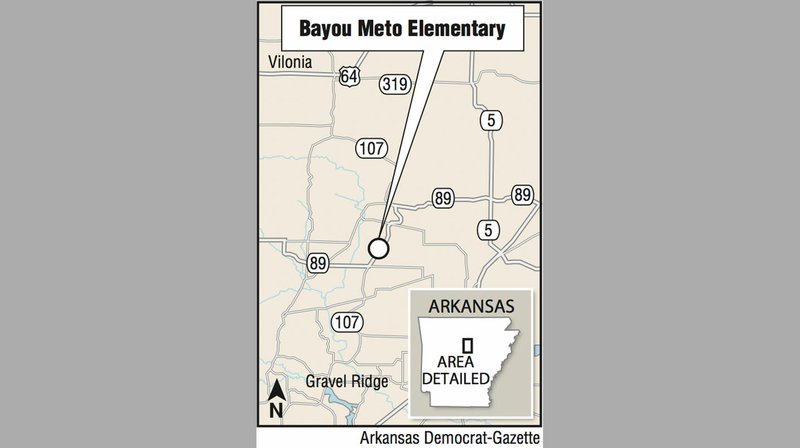 A map showing the location of Bayou Meto Elementary

The Jacksonville/North Pulaski School District will fall out of compliance with a federal desegregation order to replace the Murrell Taylor and Bayou Meto elementary schools because of a lack of state aid, a district lawyer has said.

Richardson also told the presiding judge in the long-running Pulaski County school desegregation lawsuit that state officials do not appear to care about the district's potential for violating the court order.

While the district can still appeal the funding decision to the state facility division's three-member commission, Richardson said he doesn't expect success.

"Thus, JNPSD anticipates that the State of Arkansas's official position will remain that this Court's order that JNPSD replace Taylor Elementary and Bayou Meto Elementary will have no meaning for the State," Richardson wrote.

"The State's refusal to participate in replacement of Taylor Elementary and the full replacement of Bayou Meto Elementary," he continued, "likely means that JNPSD will be unable to comply with the Court's order; that is, that JNPSD will fall out of compliance with the District's desegregation obligations because of the action of the State. This also, the State appears unconcerned about."

The dispute with the state over construction funding comes at a time when the Jacksonville/North Pulaski and Pulaski County Special school districts are preparing for a July hearing before Marshall on whether the two districts have met their desegregation obligations in the 37-year-old lawsuit and can be released from further court monitoring.

In his Friday status report to Marshall, Richardson noted that the judge in 2016 had asked for "specifics about replacing" four elementary schools so that all elementaries in the new district "are equal." The subsequent plan called for Bayou Meto and Taylor to be the final two schools to be replaced.

The district has already completed the new Bobby G. Lester Elementary and the new Jacksonville High buildings. Construction of a new middle school and a new elementary that will replace Pinewod and Dupree elementaries is underway and should be completed in August 2021.

The division staff concluded that the 53,764-square-foot Taylor needed to be 72,000 square feet to accommodate projected enrollment growth. The state division approved a share of funding for only that additional square footage -- at $175 a square foot -- which would amount to about $3.2 million. The state further calculated that the state's share of the funding would be about $1.39 million, Richardson said.

That is about 8.6 percent of the projected cost of an entire new school, Richardson said.

"It is unlikely that JNPSD will be able to build this project with this meager amount of partnership funding," he said.

The state division calculated the cost of the Bayou Meto project at $9.6 million rather than the $14.5 million estimated by the district. The division approved state funding of about $4.2 million, or about 28.7 percent of the overall cost of the planned structure.

"It is likely that JNPSD will be able to build this project with this limited amount of Partnership funding that may become available," Richardson concluded. "However, the approval is about $2 million less than what JNPSD had planned for in state partnership funds," he told the judge.

Richardson had argued to a state review panel earlier this month that the current Bayou Meto site is not large enough to accommodate both an old school and a newly constructed school. He said it is not feasible for Jacksonville to be required to build a new school facility at a new distant site and then require that students and staff at the new school use a gym at another location.

The district earlier this month appealed the facility division's decision on the two schools as well as the $175-per-square-foot cap on construction costs to a review panel made up of public and private sector organizations. The panel upheld the decisions of the division staff.

Lori Freno, general counsel for the Arkansas Department of Education, had argued to the panel on behalf of the facilities division that Taylor Elementary was not eligible for total replacement because of its relatively young age -- 38 years -- and relatively good condition. It's facility condition index was 38.2 and well below the 65 index score that typically warrants replacement, she told the panel.

Freno also told the panel that $175-per-square-foot building allowance will increase to $200 in the 2021-23 funding cycle.

Such a requirement would be contrary to the 2014 settlement agreement in the desegregation case that resulted in the state being dismissed as a party, Freno told the review panel.

The Jacksonville/North Pulaski district now has the right to appeal to the academic facilities commission, which is made up of Johnny Key, state education secretary; Larry Walther, director of the state Department of Finance and Administration; and Bryan Scoggins, president of the Arkansas Development Finance Authority.

Richardson told the judge that the appeal to the commission "is unlikely to produce a different outcome" in that one of the members of the earlier review panel, Arrington, is on the staff of the Arkansas Development Finance Authority and reports to Scoggins; and Freno, the attorney who represents the academic facilities division, reports to Key. 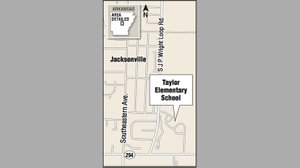 A map showing the location of Taylor Elementary School