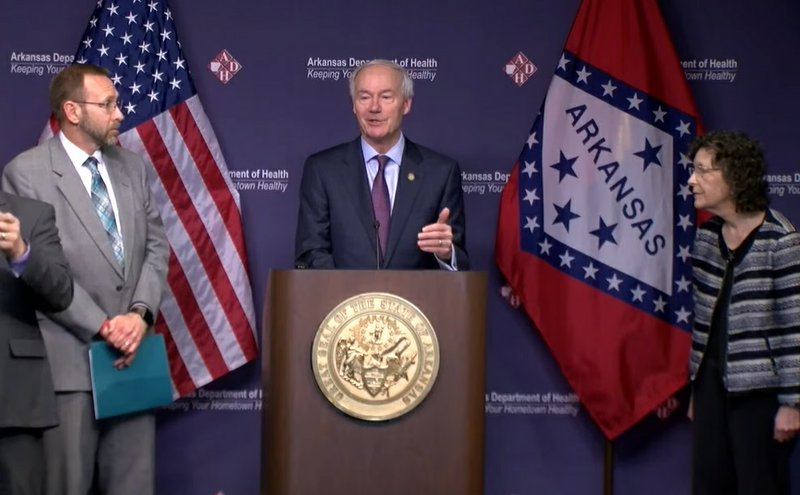 Gov. Asa Hutchinson, center, speaks during a news conference on Tuesday where he announced the first deaths from covid-19 in the state of Arkansas.

The number of Arkansans testing positive for the coronavirus increased by two to 232 Tuesday evening, according to a state website. Earlier Tuesday, the site listed 230 cases.

The number of Arkansans testing positive for the coronavirus had increased to 230 as of Tuesday afternoon, according to a state website. Earlier Tuesday, the site had listed 218 cases.

Voegle declined to release the man's name, saying she was not sure if family had been notified.

The man had a "significant medical history," including respiratory and cardiac problems, Voegele said.

Deputy coroner Robert Edwards could not immediately provide the name of the man, who was a Cleburne County resident.

Gracie Campbell, a member of Greers Ferry First Assembly of God in Greers Ferry, later confirmed that Bill Barton was a member and door greeter at the church.

Jeff Crites of Bishop-Crites Funeral Home in Greenbrier said Tuesday that the home is handling the arrangements.

Arkansas Gov. Asa Hutchinson noted Arkansas' first two deaths from coronavirus at a news conference where he also said the state is not considering a shelter-in-place order at this time.

Hutchinson said he did not want to issue such an order because he believes it would create difficult-to-answer questions of when businesses might reopen or create supply chain issues.

[Video not showing up above? Click here to watch » https://www.youtube.com/watch?v=odm3YrdB-Yc]

He also said most orders are too broad and believes the more specific orders he and the Health Department have made so far — closing beauty salons and tattoo parlors, ending dine-in options at restaurants — are better.

Hutchinson said the state received almost 28,000 face masks for healthcare workers overnight from the national stockpile. Another 1 million units of personal protective equipment is scheduled to begin arriving this weekend.

He said those gatherings can be a place to transmit the virus to family members, including older people. He advised people to limit gatherings to close family members, to have ceremonies outdoors, to physically distance themselves from one another and to consider delaying large memorial services until after the outbreak.

He said these measures protect not just families but funeral directors as well.

The number of positive cases remained at 218 as of the 1:30 p.m. news conference, Smith said.

Smith said 14 patients are hospitalized including six on ventilators. Ten people have recovered from the illness so far, he said.

Hutchinson also pointed to his previous guidance to companies, including allowing employees to work from home when possible.

The news conference came on the heels of an interview in which President Trump seemed to indicate a desire to return to business as normal in the United States by Easter, April 12.

Hutchinson said he had not heard the remarks but believed the president was trying to give people hope.

He said he believes Arkansas is only at the beginning of its outbreak and will see “more disruption” in the coming weeks.

Hutchinson said he's been advised what Arkansas is seeing in terms of the virus right now is "the calm before the storm."

Smith said he believes April 12 will likely be too early to return to business as usual.

The Arkansas Department of Health reported Tuesday afternoon that 218 people have tested positive for coronavirus in Arkansas.

The number of total cases increased by 12 since Tuesday morning, when the agency reported 206 cases. So far, seven people have recovered from the virus. One person has died, according to the Faulkner County deputy coroner.

Gov. Asa Hutchinson and state health officials plan to provide an update on the spread of coronavirus in Arkansas at 1:30 p.m. Check back to watch the conference live.