Senate stimulus near $2 trillion; despite optimism, no deal 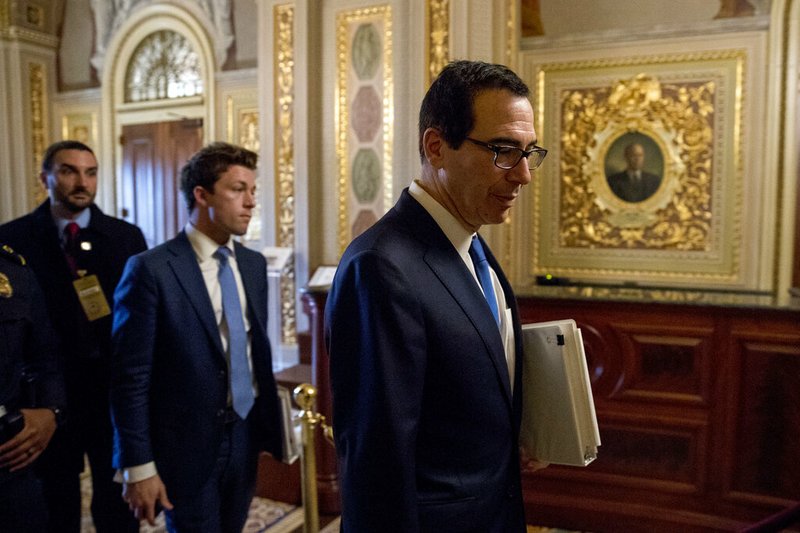 WASHINGTON -- Senate leaders and the Trump administration appeared closer to reaching bipartisan agreement Monday evening on a stimulus bill that would inject nearly $2 trillion into the economy to blunt the impacts of the coronavirus.

After a day of partisan rancor and posturing on Capitol Hill, the outlook grew markedly more positive later in the day, when offers and counteroffers were exchanged. At the White House, President Donald Trump told reporters that a deal was near.

"They have to get together and just stop with the partisan politics, and I think that's happening," Trump said. "I got a call a little while ago, I guess they are getting closer. It should go quickly, and it must go quickly. It's not really a choice. They don't have a choice. They have to make a deal."

The president also sounded a note of frustration about the unprecedented modern-day effort to halt the virus's march by essentially shutting down public activities in ways that now threaten the U.S. economy.

Even though Trump's administration recommended Americans curtail activities starting a week ago, the president said: "We cannot let the cure be worse than the problem itself. At the end of the 15-day period, we will make a decision as to which way we want to go."

"Let's go to work," he said. "This country was not built to be shut down. This is not a country that was built for this."

Trump said he may soon allow parts of the nation's economy, in regions less badly hit by the virus, to begin reopening, contradicting the advice of medical and public health experts across the country, if not the globe, to hunker down even more firmly.

[Video not showing up above? Click here to watch » https://www.youtube.com/watch?v=Dj1jnMH95NQ]

"He's a notion-monger, just tossing out things that have no relationship to a well-coordinated, science-based, government-wide response to this," Pelosi said on a health-care conference call. "Thank God for the governors who are taking the lead in their state. Thank God for some of the people in the administration who speak truth to power."

The stimulus legislation is aimed at flooding the economy with capital to revive businesses and households that have been knocked off course by fears about the virus's rapid spread. Though details remained fluid, the legislation would include direct payments of $1,200 to many American adults and $500 to children, and create roughly $850 billion in loan and assistance programs for businesses, states and cities.

There would also be large spending increases for the unemployment insurance program, hospitals, and other health-care providers that are being overwhelmed by the crisis.

Democratic concerns have focused on the $500 billion funding program for loans and loan guarantees that Republicans want to create, which some Democrats are labeling a "slush fund" because the Treasury Department would have broad discretion over who receives the money. There is little precedent for a program with a similar size and scope.

But Republicans have countered that the funding would be handled appropriately and that a cash infusion of this scale was necessary to address a major economic crisis.

Several issues were unresolved Monday evening after four days of attempts to finalize a deal -- including two procedural votes that Democrats blocked. It was possible that any provisional agreements would fall apart, senators and aides said. But some key players were sounding increasingly positive.

"We are getting there. We are very close," Mnuchin said as he exited a late-afternoon meeting with Senate Majority Leader Mitch McConnell, R-Ky., which had been preceded by a meeting with Schumer.

Unresolved issues included several under the jurisdiction of the Senate Health, Education, Labor and Pensions Committee, related to student loans and other issues, according to one Democratic aide, who spoke on condition of anonymity to discuss private deliberations. And negotiators were working on how to tailor large sums of money that was to be disbursed to the airline industry, state governments and others.

Ahead of a procedural vote earlier Monday, senators clashed angrily over delays that had bogged down the bill. Some lawmakers had hoped to reach an agreement three days ago, but talks kept breaking down during weekend negotiations. Meanwhile, the nation is reeling from the health consequences and economic pain inflicted by the virus.

Democrats have argued that the Senate GOP bill is disproportionately tilted toward helping companies and needs to extend more benefits to families and health-care providers. Republicans have countered that the bill offers unprecedented financial assistance to the entire economy and needed to be passed before more people lose their jobs.

Some economists have projected that more than 3 million people were laid off last week as businesses and consumers pulled back, and those numbers are expected to grow.

The vote Monday was 49-46, well short of the 60-vote threshold needed to advance the legislation for a final debate.

"This has got to stop, and today is the day it has to stop," McConnell said. "The country is out of time."

McConnell accused Democrats of holding up the sorely needed rescue package so they can try to add extraneous provisions sought by special interests and organized labor. Democrats have refused to support the key procedural vote that would have made it easier to pass the bill, with many complaining the legislation did not include much transparency regarding which businesses could receive hundreds of billions of dollars in emergency loans.

Sen. Joe Manchin, D-W.Va., said the bill, which includes a $500 billion program for businesses, states and cities, makes the Senate look "more focused on the big corporations and the health of Wall Street than we are on the health care of the people in rural America and Main Street."

The Trump administration would have wide latitude to disburse these loans and loan guarantees, a dynamic that has given numerous Democrats pause. The Senate bill would also include a $350 billion program to help small businesses meet payroll costs, which is meant to stem the rising tide of layoffs.

Speaking on the floor hours ahead of his conference call with fellow Democrats, Schumer insisted he was continuing to negotiate with Mnuchin in good faith and hoped to secure a deal as long as he could ensure that worker protections are included and that the fund for industries has appropriate controls.

"We have an obligation to get the details right, get them done quickly," Schumer said. "That doesn't mean blindly accepting a Republican-only bill."

"We Democrats are trying to get things done, not making partisan speech after partisan speech," Schumer said on the Senate floor, pointing out that he had met repeatedly with Mnuchin and Eric Ueland, the White House legislative affairs director, over the past 24 hours. "Our goal is to reach a deal today, and we are hopeful, even confident, that we will meet that goal."

Stock markets fell again Monday, and the Senate floor descended into an uproar as Sen. Susan Collins, R-Maine, sought recognition to speak, which Schumer objected to, prompting Sen. Tom Cotton, R-Ark., to exclaim, "This is b*!"

Despite the acrimony, negotiations continued. The White House and lawmakers were continuing to push ahead because of obvious signs that major parts of the U.S. economy are reeling. The Dow Jones industrial average has lost more than 10,000 points in six weeks. With almost 44,000 confirmed covid-19 cases in the United States, the impacts of the crisis were growing worse and worse.

As senators were clashing on one side of the Capitol on Monday, on the other side Pelosi was holding a news conference to announce House Democrats' version of the stimulus bill. Pelosi's $2.5 trillion-plus bill would send $1,500 to individual Americans, pump money into the health care system, unemployment insurance and schools and -- according to a draft circulating Monday -- require airlines and other companies that receive aid to pay a $15-an-hour minimum wage.

"Democrats take responsibility for our workers," Pelosi said. "We require that any corporation that takes taxpayer dollars must protect their workers' wages and benefits -- not CEO pay, stock buybacks or layoffs."

But if the House charts its own course on a competing piece of legislation, it could take longer to arrive at a bipartisan consensus that can pass both chambers and get signed into law.