After 11 years of gains, projections dire for jobs, stocks by PAUL WISEMAN, ALEXANDRA OLSON AND JOYCE M. ROSENBERG OF THE ASSOCIATED PRESS | March 24, 2020 at 2:18 a.m. 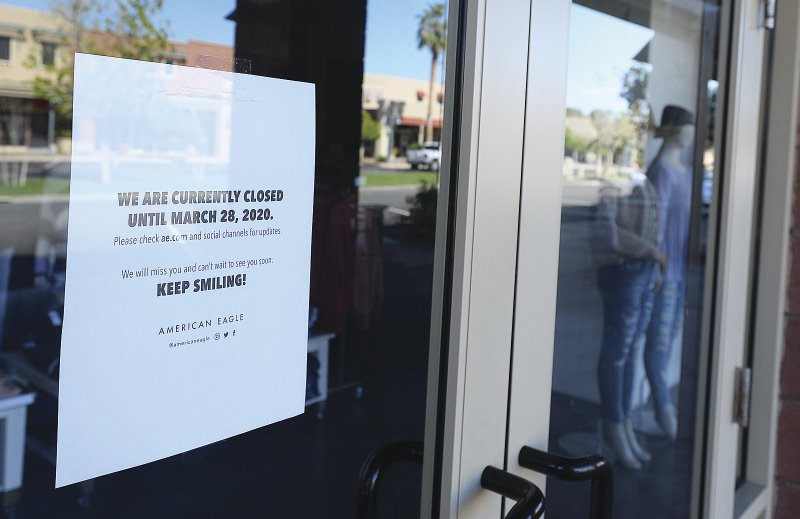 A sign on the door to American Eagle in The Village inside the Yuma Palms Regional Center states the store is closed until March 28, due to coronavirus and to &quot;Keep Smiling!&quot;. (Randy Hoeft/The Yuma Sun via AP)

WASHINGTON -- Never before has the U.S. economy screeched to such a sudden, violent stop. Its shutdown has inflicted a case of whiplash on Americans who had enjoyed a decade-plus of gains from the job market, the stock market and a steady economic expansion. The economy is cratering into what looks like a deep recession. Millions will likely lose jobs by summer.

"The economy has never gone from healthy to disaster so quickly," said Jason Furman, who was President Barack Obama's top economic adviser and is now a professor at Harvard's Kennedy School.

"In the financial crisis," Furman noted, "the housing bubble burst in 2006, the first financial tremors were in 2007 and the major financial events were spread out from February through September of 2008. What would take years in a financial crisis has happened in days in this health crisis."

Since the recession ended in 2009, the economy has risen for a record 11 years. It hasn't exactly been a boom. Annual growth has averaged a decent but unspectacular 2.3% since 2010. Yet the expansion has been solid and durable. Employers have added jobs for 113 straight months, the longest such streak on record.

Just two weeks ago, the government delivered a blockbuster employment report: A healthy gain of 273,000 jobs in February. A 3.5% unemployment rate, a 50-year low.

What's more, public confidence was up. Consumers were spending. Incomes were rising. Layoffs were rare.

In just a couple of weeks, it's all ended with the shutdown of most business activity nationwide, and a destructive recession seems inevitable. Goldman Sachs expects the economy to shrink at a sickening 24% annual rate in the April-June quarter. That would be, by far, the worst quarterly drop on record. Just days before, Goldman had projected a 5% annual drop in that period.

This week, economists say the government could report that up to 3 million people applied for unemployment benefits last week, which would easily set a record. IHS Markit predicts 7 million job losses from April to June and for unemployment to shoot to 8.8% by late this year. Other economists see joblessness going much higher than that.

As investors have grasped the depth of the crisis, panic selling has set in. Since Feb. 12, the Dow Jones Industrial Average has plunged 35%, wiping out vast household wealth and likely undermining people's confidence and willingness to spend.

"I'm not sure that anyone honestly has any sense of how this ultimately resolves and on what sort of timetable," said Daniel Feldman, a former U.S. diplomat who counsels corporations for the law firm Covington & Burling.

Policymakers are straining to help. The Federal Reserve said Monday it would buy as much government debt as it deems necessary and will begin lending to small and large businesses and local governments to help them weather the crisis. It has already slashed its benchmark interest rate to near zero and is trying to ensure that companies maintain access to the short-term credit they need for payrolls and other expenses. Congress and the White House have been preparing an enormous stimulus program.

Typically, economists don't recognize a recession until long after it's begun, the warning signs apparent only in hindsight.

"Never in the course of my career have I known the week a recession started," said Diane Swonk, chief economist at the accounting and consulting firm Grant Thornton, who calculates that the downturn began in the first week of March as the economy all but locked down.

A few weeks ago, airliners were running 85% to 100% full, said Nicholas Calio, chief executive officer of Airlines for America, an industry association and lobbying group. Now, their occupancy rates are 15% to 20%. Recently, he traveled on a plane with just 15 passengers.

Automakers, too, are reeling. Until last week, the research firm Cox Automotive was forecasting 16.6 million new-vehicle sales this year, down only slightly from 2019. Now, said Michelle Krebs, a Cox analyst, it appears sales could drop as low as 14 million.

Orders and shipments might hit zero next week. Aznavorian worries about his cash flow. Even when sales eventually rebound, he won't be collecting customer payments for months.

For now, many U.S. households are coping -- working from home and still holding on to jobs. Some of them may even be managing to save money, "which will give us more resources later," said Scott Hoyt, senior director of consumer economics at Moody's Analytics.

Yet for much of America, the picture is bleak. Roughly 82 million people -- three-fifths of the U.S. workforce -- are hourly employees. Most of them can't work from home and won't be paid if they don't work. They have rents to pay and food to buy. And it's still unclear what financial aid the federal government will provide.

"They're scrambling and at financial risk," Hoyt said.

Information for this article was contributed by Tom Krisher, Ken Sweet and David Koenig of The Associated Press.