UALR pitcher's breakthrough forced to be put on hold 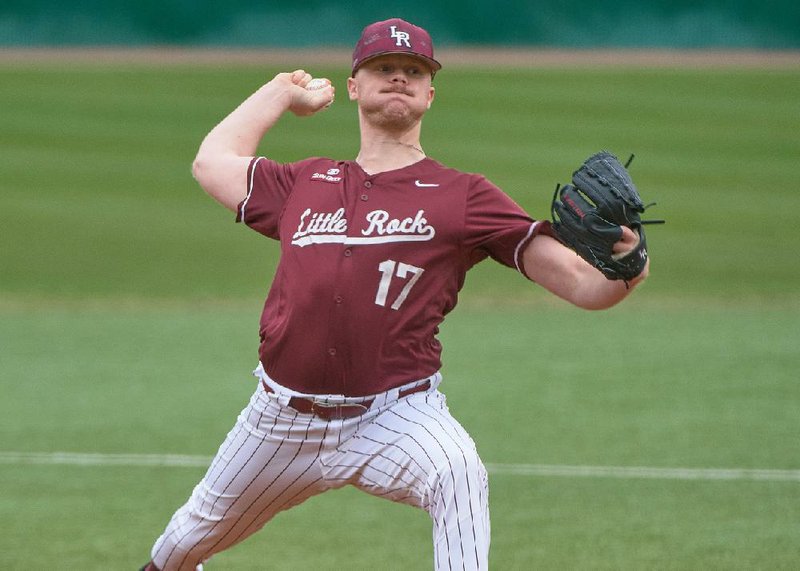 UALR’s Aaron Funk is seen pitching against Illinois State on Feb. 17. On March 1, Funk struck out the first eight batters he faced and fanned a total of 17 — a new single-game school record — in the first complete game of his college career as the Trojans beat North Alabama 2-1. (UALR athletics)

Kale Emshoff had yet to catch a game for Aaron Funk this season prior to March 1.

Emshoff, a redshirt junior catcher for the University of Arkansas at Little Rock baseball team, was the designated hitter in the Trojans' lineup during Funk's first two starts in February, while Ramon Padilla served as the man behind the plate.

On the first day of March, Emshoff finally teamed up with UALR's Sunday starter. Looking back now, Emshoff could tell early on in pregame warmups that Funk was in a zone, one he admitted that he hadn't quite seen before from UALR's pitching staff.

Emshoff just didn't know that it would translate to Funk orchestrating one of the top individual pitching performances in school history.

"His level of intensity was just different," Emshoff said. "And then moving into the bullpen [session], it was pristine, and everything was locked in and focused. He didn't say much. There was no talking. It was just getting your work in. I can't explain it."

Funk's right arm did all the explaining that afternoon, and Emshoff had the best seat for it all at Gary Hogan Field in Little Rock. Funk struck out the first eight batters he faced, then fanned a total of 17 on the day -- a new single-game school record -- in the first complete game of his college career as the Trojans squeaked out a 2-1 victory over North Alabama. Emshoff also hit the decisive solo home run in the game.

Funk -- who allowed four hits and a walk -- said he was well aware of the strikeout total through the first eight, but after that, it became a blur.

Funk's 17 strikeouts also tied the Sun Belt Conference's single-game record, and up until that point, no one in college baseball this season had thrown that many in a game -- a season that, like for the rest of the sports world, was abruptly shut down recently amid the coronavirus pandemic.

A week after his record-breaking performance against North Alabama, Funk would fittingly become the final Trojans pitcher to throw in the 2020 season. Emshoff was once again his catcher.

Funk tossed a second consecutive complete game March 8, allowing five hits, a walk, an earned run and striking out nine in UALR's 5-1 victory over Southern Mississippi in Hattiesburg, Miss. That was the last time the Trojans would take the field this season.

Funk will never know, but he'll know he was on the right path.

After a difficult sophomore season in 2019 -- in which his ERA dipped from the 3.95 he had as a freshman to 11.45, while his overall usage decreased significantly -- Funk said he felt he was turning a corner in the summer when he finished tied as the Northwoods League's leader in strikeouts while playing for the Fond du Lac Dock Spiders, who are based in Fond du Lac, Wisc.

Funk described the experience as if it was his personal baseball awakening, a necessary undertaking for him to "re-find" himself and improve as a player.

"Going up there and just not really worrying about a whole lot. Just being able to [say], 'OK, well, I have baseball everyday and let's just be the best version of myself and then just have fun with it' -- I mean, that's just what the game's all about," Funk said. "You play every single day, play against top-level competition. ... Having fans heckle you, having fans cheer for you, signing autographs, taking pictures, I mean, it's what you dream about as a baseball player."

UALR's pitching coach, R.D. Spiehs, has worked extensively with Funk ever since Spiehs was hired in July 2018. Part of his first season on the job in Little Rock was spent helping mentor Funk and adjust his mechanics.

"We just had some really heart-to-heart and honest conversations more than anything with grip or pitch design on hey, like, we can make a choice -- we can throw this book away or we can start writing with a new ink and a new chapter and get better from here," Spiehs said. "He embraced it, and then he ran up to the Northwoods League ... and he led them in strikeouts."

In his first four starts this season -- his first as a full-time starter -- Funk had a 2.01 ERA, a team-best .80 WHIP, a .157 opponent batting average and 37 strikeouts, which was tied for 26th nationally and tied for second in the Sun Belt. His ERA was the lowest among starters on the team and ranked 13th in the Sun Belt.

Prior to the season shutdown, Funk had been named Sun Belt pitcher of the week in back-to-back weeks.

But with the season now lost, life is far different than what it used to be. UALR has shifted its instruction to online for the rest of the semester, the Sun Belt has canceled all remaining sports seasons and practices, and Funk is back home in Lawrence, Kan.

He had continued to work out and throw daily at the Premier Baseball training academy, which is just south of Kansas City, Kan., and about 45 minutes from his house, but now even that has been put on hold because of the coronavirus. Under mandate from the mayor, beginning today Kansas City and its metro counties have been issued a stay-at-home order for at least the next 30 days.

Funk doesn't know what lies ahead, but he does know this has been a learning experience.

"Baseball is just a small portion of everything that's happening," Funk said. "From talking to people, it could be a lot worse. We could be a small business that's going under because people aren't being able to come in. It just kind of shows you that it's a lot bigger than baseball. People's health just means a whole lot more than nine innings under the lights."