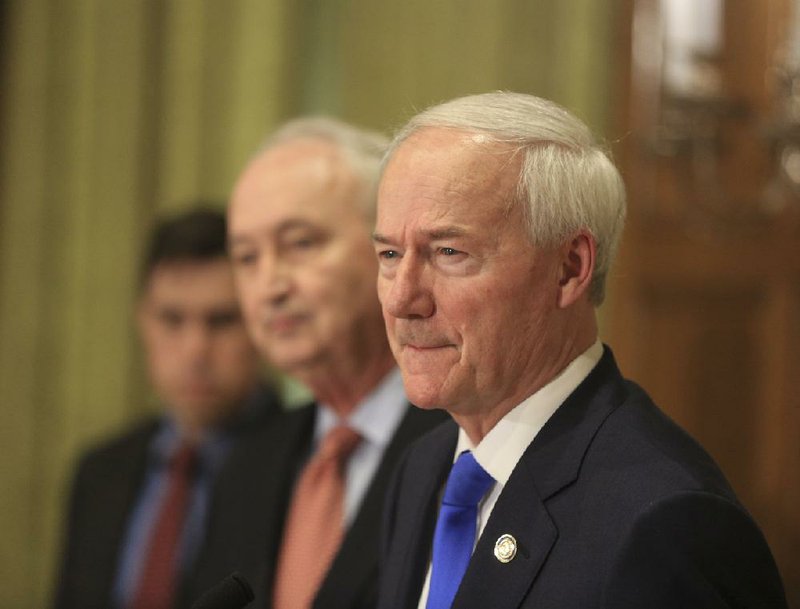 The Arkansas Department of Health reported Tuesday that 206 people have tested positive for coronavirus in Arkansas.

The general budget will now be $5.38 billion for fiscal 2020, which ends June 30. The Republican governor said he isn't planning any layoffs, but his agency heads just learned of the budget cut Monday and now must decide how to reduce spending. He also plans to use the state's surplus to cover needs.

The governor said the cut resulted from the combination of a projection that the state will take in less general revenue than forecast in fiscal 2020 because of job cuts and business slowdowns amid the pandemic, and the state extending its April 15 filing and payment deadline for individual income taxes to July 15.

Hutchinson said he also plans to call a special session of the General Assembly soon, before the fiscal session scheduled to start April 8, to authorize his administration to tap $173 million in unallocated surplus funds to help fill some budget holes and potential needs.

State Department of Finance and Administration officials expect to collect about $160 million less in general revenue than originally projected between now and the end of fiscal 2020, Hutchinson said at a news conference in the governor's conference room at the state Capitol.

The rest of the budget cut is to make up for shifting the individual income tax revenue from one fiscal year to the next. The extension of the deadline has the support of House and Senate leaders, Hutchinson said.

This extension is confirmed by the state Department of Finance and Administration under emergency authority granted in state law and doesn't require a change in the law, department spokesman Scott Hardin said afterward.

[Video not showing up above? Click here to watch » https://www.youtube.com/watch?v=DOejFIevTL8]

"This should provide relief and some consistency for individual Arkansas taxpayers," Hutchinson said.

"We all know that there is a great need because of the individuals in Arkansas that are short of cash," the governor said. "They might have lost their job. They're living from paycheck to paycheck, and now they don't have that paycheck. They might be waiting for unemployment benefits, which will be less. All of this strains the individual families."

Hutchinson said the deadline for the state's corporate income tax filers and for estimated payments will remain the same. That deadline is April 15, Hardin said afterward.

"Now, with moving part of the revenue stream, that leaves us a larger gap this year," Hutchinson said, referring to fiscal 2020.

"I will remind everyone that we're not the federal government. We can't print money and we have to balance the budget every year, and so our deadline for balancing the budget is June 30, even though many of the payments are going to be extended for individuals until July 15.

"This leaves us in total with a $353 million shortfall over the next three months," Hutchinson said.

"This revision is necessary because of the extraordinary impact from business and consumer shutdowns and projected revenue shortfalls resulting from COVID-19 and the governor's announced shifting of tax filing and payment deadlines," Walther wrote in a letter dated Monday to the Legislative Council's co-chairmen, Sen. Cecile Bledsoe, R-Rogers, and Rep. Jeff Wardlaw, R-Hermitage.

Rep. Lane Jean, R-Magnolia, a co-chairman of the Legislature's Joint Budget Committee, said in an interview that cutting the general revenue budget "was something that was needed.

"With the job loss and sales tax [collections] tanking, I think it was the right call to do it," he said.

The committee's other chairman, Sen. Larry Teague, D-Nashville, said he supports the governor's efforts as well.

Spending priorities are ranked in the Revenue Stabilization Act, with higher-priority items placed in Category A, followed by Categories B and C.

Walther said Categories B and C will be cut immediately, and then "we'll distribute the remainder ... throughout Category A, and that will be distributed evenly among all the agencies.

"Then, we will be working with each of the agencies to determine where they have critical services or work that needs to be done, and we'll work with them and determine if they need to have dollars filled back in with the surplus that we have," he said.

State budget administrator Jake Bleed told reporters the $236 million across-the-board reduction in the Category A allocations amounts to a 4.2% cut in fiscal 2020.

"In addition to using the one-time funds, we've got strong fund balances in places where we can use them," such as the educational adequacy trust fund, the Medicaid trust fund, the performance fund that is earmarked for employees' merit raises, and the budget stabilization trust fund, he said.

"A cut this big, there is no way we're going to be able to bridge that with what we have got at the agencies alone, so we are going to ask or be working with the General Assembly for some leeway to pull money out of general allotment reserve surplus to patch those holes as they come up," Bleed said.

"This necessitates a special session of the General Assembly to fill the holes in the budget," Hutchinson said.

"I will be working with the legislative leadership again to identify the specific time frame for this special session," he said. "It will clearly need to be soon, but we want to work with them as to the exact time frame."

House Speaker Matthew Shepherd, R-El Dorado, said in an interview, "We are looking at something that is a matter of days, and it would be sooner rather than later."

Hutchinson said the cut will affect the Department of Health and "every agency in state government under our balanced budget procedure.

"So, we have to utilize our $173 million [unallocated surplus ] ... to fill the gaps, to make sure that the Department of Health can carry out their mission without being reduced in their budget," Hutchinson said.

"We want to make sure that [the Division of Emergency Management] has its resources during this emergency time," he said. "We want to make sure that we have our child welfare workers able to make their calls and do their work, so we will utilize and manage the unallocated surplus to accomplish the broader mission of state government, even though it's going to be a serious belt-tightening time for all of state [government], except for those that are on the front line of the current crisis. We are going to utilize our surplus to make sure those needs are met."

In addition, there is a need for surplus funds for a quick response, in the event the state needs ventilators, respirators, personal protective equipment and help for hospitals, "so during this emergency time we have to keep some of those reserves in place with a lot of flexibility for quick action to meet these needs," the governor said. "Those will be the items that will be addressed in the special session of the Legislature."

Jean said in an interview, "I hope we'll plug holes to get through this thing until the economy turns around."

Senate President Pro Tempore Jim Hendren, R-Sulphur Springs, said, "We do not want to cut [the Department of Human Services] and provider rates and the number of workers in the middle of a health care crisis."

"The secretaries were just notified of this [budget cut] today," he said, referring to his 15 department heads.

"They've got to look at their individual budgets and we got to look at the fact that travel is down. We're not traveling. We have some lower expenses, but obviously we want to look at all of those, and we look at them programmatically as well, so it's too early to say exactly where those cuts are going to come from. But it's a lot, and we will take it a step at a time. We are on the early stages of determining that.

"That's also why we have the unallocated surplus that we are going to utilize to make sure we are able to carry out the essential services, so we will manage through this. I'm optimistic, but it is going to be a challenge for the next three months," Hutchinson said.

On March 4, Hutchinson proposed a general revenue budget of $5.83 billion in fiscal 2021 and setting aside $54 million of surplus revenue separate from the budget.

State officials plan to unveil a revised proposal for fiscal 2021 on April 8 -- the first day of the fiscal session.

"Next year is going to be rough," Bleed said.

"But we are taking our best month [for general revenue tax collections in April] and putting it on the front end [in July], and we've got a surplus already budgeted in before this all started, so there's some reasons why [fiscal] '21 may not be awful."

In January 2010, amid the slowdown from the Great Recession, then-Gov. Mike Beebe's administration cut the state budget by $106 million just a few months after another $100 million cut.