Afghan rivals blame each other 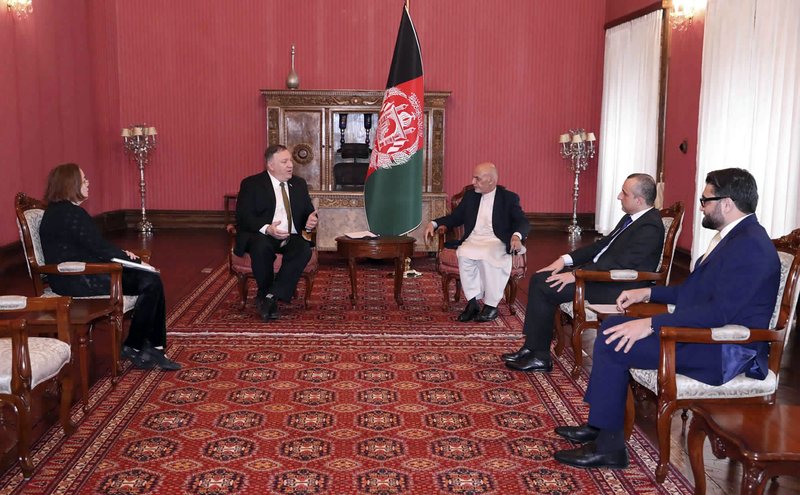 U.S. Secretary of State Mike Pompeo, center left, meets with Afghan President Ashraf Ghani, center right, at the Presidential Palace in Kabul, Afghanistan, Monday, March 23, 2020. Pompeo was in Kabul on an urgent visit Monday to try to move forward a U.S. peace deal signed last month with the Taliban, a trip that comes despite the coronavirus pandemic, at a time when world leaders and statesmen are curtailing official travel. (Afghan Presidential Palace via AP)

KABUL, Afghanistan -- Washington's threat to cut $1 billion in Afghanistan funding -- a response to the refusal of rivals in Kabul to work together to advance peace -- comes at a time when the impoverished nation risks being overwhelmed by the coronavirus pandemic.

On Tuesday both President Ashraf Ghani and his rival, former Chief Executive Abdullah Abdullah, blamed one another for failing to resolve the feuding, which prompted Secretary of State Mike Pompeo to threaten the funding cut.

Pompeo called out the two leaders as he ended a visit to Afghanistan on Monday. He left Kabul without being able to secure a power-sharing deal.

Ghani told the nation in a televised address that Abdullah's power-sharing demands were unconstitutional. For his part, Abdullah said Pompeo's visit was a missed opportunity.

Pompeo said the Trump administration would slash $1 billion in assistance to Afghanistan and reduce all cooperation unless Ghani and Abdullah agree on forming a new government. Speaking to reporters aboard his plane on the return flight home, Pompeo said he was hopeful the two rivals "will get their act together and we won't have to" cut the assistance. "But we're prepared to do that," he said.

Earlier, he said Ghani and Abdullah's "leadership failure poses a direct threat to U.S. national interests." Apart from reducing assistance by $1 billion this year, another $1 billion will be cut in 2021 if the bickering continued, Pompeo said.

Ghani seemed unfazed, though his government covers barely 25% of its budget, according to John Sopko, the U.S. inspector general for Afghanistan reconstruction. More than 75% of all expenses, including the running of government ministries, is covered by the international community.

Sopko's regular reports have also criticized the Afghan government for widespread corruption and Transparency International has ranked Afghanistan among the most corrupt at 173 out of 180 countries. The United States alone pays $4 billion annually toward Afghanistan's security forces.

"I can assure you that the reduction of the U.S. assistance would not have a direct impact on the system," Ghani said in his speech.

From Kabul, Pompeo flew to the Persian Gulf to meet with a leader of the Taliban, the Afghan insurgent group that last month signed a peace deal with the U.S. as a first step toward withdrawing American troops from Afghanistan by mid-2021.

As part of the deal, rival factions in Afghanistan were to come together in all-Afghan talks about shaping the country's future. However, Washington made clear from the start that the pace of a U.S. troop withdrawal is linked to the Taliban clamping down on terror groups and aiding in the fight against the militant Islamic State group -- not on the success of intra-Afghan talks.

Ghani and Abdullah, his main rival in last September's disputed presidential polls, have been waging a bitter power struggle that has seen both men declare themselves president in competing inauguration ceremonies earlier this month.

After meeting chief Taliban negotiator Mullah Abdul Ghani Baradar in Qatar, Pompeo told reporters he was satisfied the Taliban were keeping their side of the deal, had reduced violence and were ready to start negotiations with the leadership in Kabul.

In an English-language statement Tuesday, the Taliban said Baradar's meeting with Pompeo stressed that only a strict implementation of the peace deal would "pave the way for intra-Afghan negotiations along with enduring peace and cease-fire, including a future Islamic government in accordance with the agreement."

The statement also said Pompeo assured the Taliban that the U.S. forces' withdrawal "will continue in accordance with the declared timetable."

The squabbling between Ghani and Abdullah -- both linked to powerful warlords, all with heavily armed militias -- has put a pall over the deal since its signing on Feb. 29.

Ghani has also refused to release 5,000 Taliban prisoners the deal promised would be freed as a goodwill gesture ahead of intra-Afghan talks. Separately, the Taliban were to free 1,000 Afghan officials and military personnel they hold captive.

Afghanistan has registered only 42 cases of the virus though there are fears the true figure could be far greater. More than 137,000 Afghans have returned since the start of the year from Iran, the scene of the Middle East's largest outbreak.

Pompeo said that despite the threatened aid cuts, Washington remained committed to the Afghan people. As a demonstration of that, he said, the U.S. would provide $15 million in assistance to help Afghanistan fight the spread of the coronavirus.