Facility has machines, protocols but lacks chemicals to consistently do the job by Kat Stromquist | March 25, 2020 at 6:57 a.m. 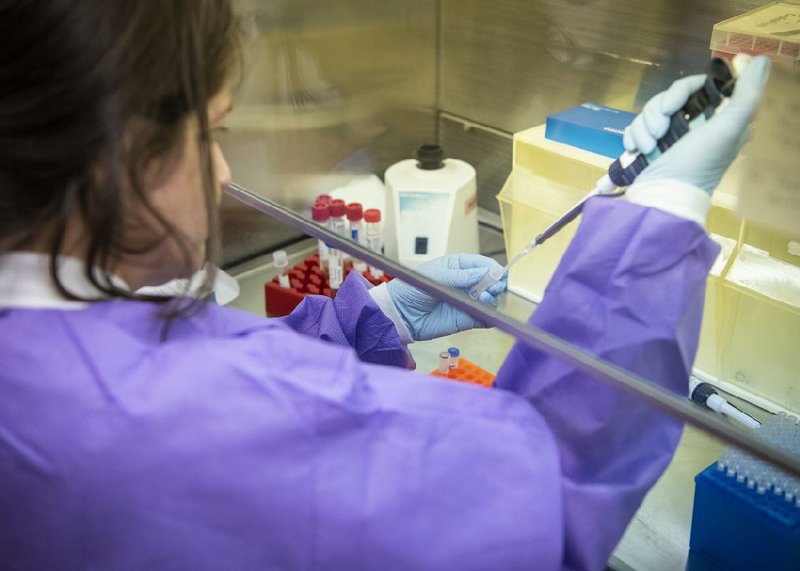 Dr. Jennifer Laudadio, director of molecular pathology, conducts a coronavirus test in the University of Arkansas for Medical Sciences labs using a screening sample Tuesday. (Special to the Arkansas Democrat-Gazette)

Officials at the University of Arkansas for Medical Sciences in Little Rock don't know when they'll be able to consistently process hundreds of coronavirus tests per day, despite saying last week that they anticipated as many as 700 daily.

While the academic medical center has acquired machines and refined protocols to ramp up in-house tests, officials said Tuesday that a shortage of chemicals and other materials, called reagents, has slowed testing.

Supply issues that are "out of our control" mean they can't predict from day to day how many tests they'll be able to complete, UAMS Chancellor Cam Patterson and another official said in a phone interview.

That's a setback for coronavirus testing expansion at the center, a key part of Arkansas' coronavirus response.

UAMS Medical Center Chief Executive Officer Steppe Mette said projections of as many as 700 tests per day by the end of this week were based on "capacity."

But the shortage of chemicals and other supplies means UAMS isn't capable of delivering at those levels right now. "We don't know today what reagents we'll have tomorrow," he said.

On Monday evening, a vendor called and said it could deliver reagents for 60 tests, Mette said -- less than what the organization had ordered.

"That's the problem with giving anyone a number to hang their hat on. We would love to have all of our capacity filled every day ... but that is going to change from day to day."

While UAMS has placed orders for reagents that would allow for the maximum number of tests per day, "they're simply not being delivered" by suppliers, Patterson said.

"None of us were aware that it was going to be so difficult to get the kits that would allow us to do the assays," he added.

Materials in short supply include cartridges to use with recently purchased testing machines, RNA molecule extraction kits, swabs and flu tests, according to a UAMS spokeswoman.

Limited diagnostic testing has dogged the U.S. response to the coronavirus outbreak, with people across the country reporting that they were denied tests or told that none were available.

Mette and Patterson say UAMS was truthful about how many tests it plans to process.

"The conditions on the ground changed, and that's what we're experiencing," Patterson said. "I feel like we are operating in near warlike conditions, and we're doing the best that we can."

He added that UAMS has experienced other supply problems amid the outbreak, including having a signed contract for supplies that had even been loaded onto a truck for delivery, but another bidder intervened.

UAMS officials have been in touch with Attorney General Leslie Rutledge about the problems.

An in-house test, for which Mette said some reagents are on hand, is still expected to go live this week, and UAMS continues to offer drive-thru screening and telemedicine to assess risk for covid-19, the disease caused by the coronavirus.

Reagents also are limiting factors in tests conducted by the laboratory at the Arkansas Department of Health, spokeswoman Danyelle McNeill wrote in an email.

The public health agency has expanded its testing capacity to about 210 tests per day, she wrote, but it has reagents on-site to conduct only about 500 total tests at this time.

A new shipment is scheduled to be sent to the state's laboratory on Monday for overnight delivery, but officials are trying to have that date pushed up, McNeill wrote.

At a livestreamed news conference Tuesday, Arkansas Secretary of Health Dr. Nate Smith said the capacity for testing is "accelerating" across the country and he hopes that trajectory continues.

"The more testing we have available to us, the better we'll be able to refine our approach," he said. "We're at least heading in the right direction there."