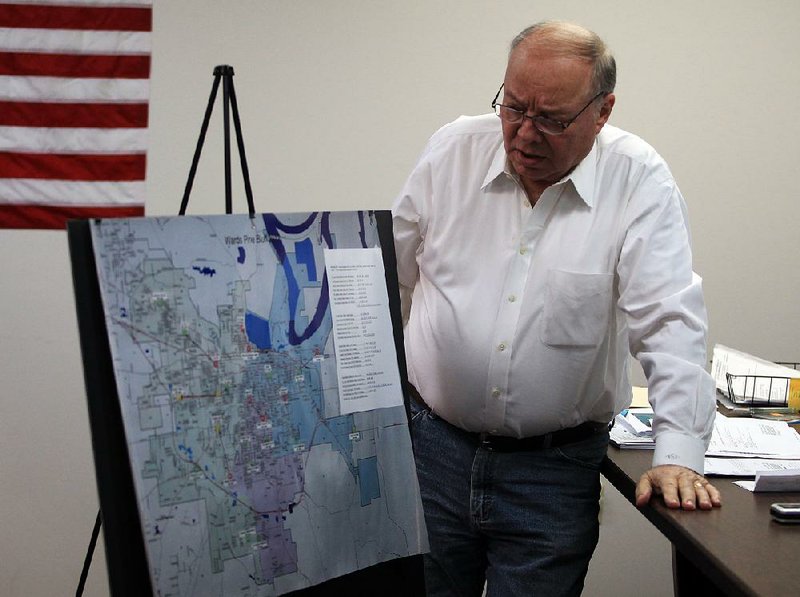 PINE BLUFF -- Jefferson County will have at least one fewer polling site for voters in the March 31 runoff election for the Justice of the Peace District 13 race between incumbent Justice Brenda Bishop Gaddy of Altheimer and her challenger, Jeff Edwards of Sherrill.

On Tuesday, just before noon, county election commissioners Michael Adam, Stuart "Stu" Soffer, and Theodis "Ted" Davis were told that the Sherrill City Hall/Volunteer Fire Department would not be made available for the election by order of Mayor Jody Campbell.

After an unsuccessful bid to postpone the runoff elections in the District 13 race and the Pine Bluff Ward 2 City Council race between Lloyd Franklin II and Steven Shaner, commissioners agreed to reduce the 14 designated polling sites in those areas to six -- three for each race.

On Tuesday night, the Jefferson County Election Commission decided to consolidate the voters in the five precincts that were to vote in Sherrill into the polling site in Altheimer. Those precincts are 1, 2, 4, 11 and 905.

Earlier in the day, the commission was advised via email by Shantell McGraw, election coordinator with the Secretary of State's office, that consolidation was a viable option.

"You can treat it as an emergency polling location change," the email read. "The Governor addressed this in his executive order. You can consolidate election day sites up to 3 days prior to the election, so long as a notice is posted [at] polling sites that would have otherwise been used absent the emergency."

Davis expressed concern about the change, noting that some voters in those precincts would have to travel over 20 miles to vote in Altheimer, and suggested that the commission instead designate another polling site to replace it, somewhere in the northeastern portion of the district.

"Wouldn't it be in the best interests of the voters in those precincts to at least have two [polling sites] because some of those precincts are actually in the Humphrey area?" Davis asked. "Humphrey should be a part of that."

"We've already looked at this and for us to try and get a poll site open over in Humphrey is going to be, if not impossible, the next thing to impossible," Adam responded, explaining that with a week to go before the runoff election, arranging a site and preparing poll workers would create a logistical nightmare.

"The least change we make at this point is the best," Adam said.

With a unanimous vote required to make the change, Davis voted in favor, but noted that his vote was made with reservations.