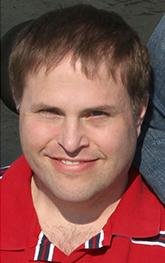 Jackson, whom friends and family referred to as "Kip," was diagnosed with amyotrophic lateral sclerosis (ALS) -- commonly known as Lou Gehrig's disease -- in 2012 and died of complications from the disease, said his wife, Robin Jackson. Before the diagnosis, he had had problems with his right leg and began falling.

"He was an amazing man who championed this disease wholeheartedly," said Jennifer Necessary, the executive director of the ALS Association's Arkansas chapter. "Everyone who knew him, loved him and we were all blessed to be a part of his vibrant life. He was an inspiration to all. He will be deeply missed but his legacy will live and shine forever."

Jackson, a lifelong North Little Rock resident, was the son of Janice Blackwood Jackson and Carl Jackson Jr., both deceased.

Jackson worked in information technology throughout his career at companies such as the Arkansas Democrat-Gazette, Arkansas Children's Hospital and Windstream.

Clay Carson of the IT department at the Democrat-Gazette said Kip Jackson was the perfect fit for a job that involved customer service.

"He didn't have any necessarily special or direct skills in any of this stuff that we did, but he knew the newspaper. The most important thing was he was just a person that everybody liked," Carson said. "When people have computer problems, they tend to get frustrated really quick, and it was so nice to have somebody to just put them at ease, be their buddy, be their advocate and work through a problem until they got it resolved. Kip was always able to do that. He was just such a positive spirit. It was just a blessing to have him there."

The life expectancy of an ALS patient is two to five years after the initial diagnosis.

"We are very much at peace right now," said Robin Jackson. "We've been very fortunate. He lived eight years with this disease."

In a 2013 Democrat-Gazette article, Jackson described ALS as "No muscle nourishment. What happens is, the neurons that are in your brain and brain stem and upper spinal cord will start to die off because they're not getting the proper nourishment. When that happens, it kills the neurons and the brain cannot communicate with your muscles."

There is no cure for the disease, which causes the gradual deterioration and loss of muscle control that leaves patients unable to walk, use their arms or breathe on their own.

Robin Jackson said Kip quickly deteriorated when he was first diagnosed, but then leaned into the struggle before him, meeting it head on with his trademark humor and faith.

"I've never seen somebody that didn't let the worst of the worst get them down," Robin Jackson said. "It was just weird. It was a 'the card God dealt him' kind of thing. He was determined to find humor in it. He found happiness and joy in the whole thing. He even said he was thankful for being diagnosed with ALS because he can appreciate life so much more now. He saw so much beauty in everything."

Even as his symptoms progressed and he had to use a wheelchair, Kip developed deep bonds with the ALS community in the state and championed for others with the disease.

He formed associations with organizations in Arkansas that support the ALS community by lobbying for medications to treat the disease, lending equipment and providing financial support.

"My nickname was 'Kipster' for him. He was the life of the party and that Kipster smile was contagious," said Lara Blume McGee, founder of the ALS in Wonderland Foundation. "After being diagnosed with ALS, he fought hard as hell. With his loyal wife, Robin, by his side, he never gave up. He never felt sorry for himself."

Cris Mammarelli, a care services coordinator with the ALS Association's Arkansas chapter, said Kip passed that spirit on to those around him.

"He's one of the wittiest people I've ever known, so full of talent and strength," Mammarelli said.

McGee said Kip was a vital part of the "very tight-knit" ALS family in the state.

Kevin Thompson, who was diagnosed with ALS in 2013, said Kip was both a support and inspiration to him.

"Kip was diagnosed six months before me and was the most amazing person, just like my sister," Thompson said, speaking of his sister Tammy Thompson Brown, who died in 2010 after five years with the disease. "Kip was always willing to help. We used to chat often. He was so funny and strong with an amazing support group. He loved to pick on people."

Kip Jackson's sister, Julie Nichols, who said she babied Kip as a young brother nearly 11 years her junior, was struck by how courageously he took on the disease.

"We were always very close. We just had a connection in a really loving family," Nichols said. "Kip was so funny. He would just do things or say things from out of nowhere and it would just spin the room around. Just so funny."

Nichols said a memorial service will not be held at this time in order to limit the chance of attendees' exposure to the coronavirus.

"It will probably be several months from now," she said. "He said he wanted it to be a celebration, and that's exactly what it's going to be. Kip had rhythm, and he loved all types of music. There will be dancing and singing. He wanted a big party, and that's what we will give him."