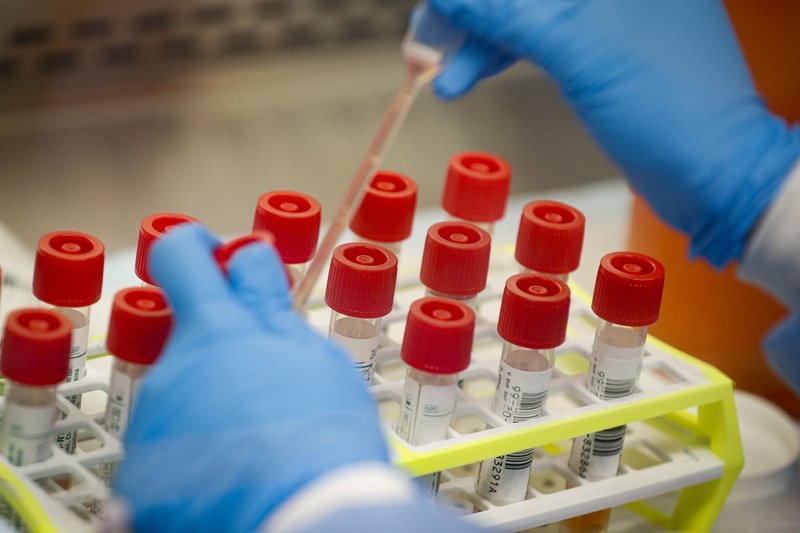 FILE - In this Wednesday, March 11, 2020 file photo, a technician prepares COVID-19 coronavirus patient samples for testing at a laboratory in New York's Long Island. A series of missteps at the nation's top public health agency caused a critical shortage of reliable laboratory tests for the coronavirus, hobbling the federal response as the pandemic spread across the country like wildfire, an Associated Press review found. (AP Photo/John Minchillo)

WASHINGTON -- A series of missteps at the nation's top public-health agency caused a shortage of laboratory tests for the coronavirus, an Associated Press review found.

In February, as the virus began taking root in the U.S. population, Centers for Disease Control and Prevention data shows government labs processed 352 covid-19 tests -- an average of only a dozen per day.

"You cannot fight a fire blindfolded," Tedros Adhanom Ghebreyesus, head of the World Health Organization, said at a recent briefing. "We cannot stop this pandemic if we don't know who is infected."

The Department of Health and Human Services, which includes the CDC, has begun an internal review. But outside observers and federal health officials have pointed to four primary issues that together hampered the national response -- the early decision not to use the test adopted by the World Health Organization, flaws with the more complex test developed by the CDC, government guidelines restricting who could be tested and delays in engaging the private sector to ramp up testing capacity.

"There were many, many opportunities not to end up where we are," Dr. Ashish K. Jha, the director of the Global Health Institute at Harvard, told the AP. "Basically, they took this as business as usual. ... And that's because the messaging from the White House was 'this is not a big deal, this is no worse than the flu.' So that message basically created no sense of urgency within the FDA or the CDC to fix it."

In interviews with the AP, two federal health officials with direct knowledge of the situation said CDC experts don't know why many of the agency's test kits failed to reliably detect the virus. The officials spoke on the condition of anonymity because they were not authorized to speak publicly about what went wrong.

J. Stephen Morrison, a health-policy expert at the Center for Strategic and International Studies in Washington, called the testing issues a "debacle," contributing to what he described as a confused and delayed federal response to the crisis.

As a result, he said, the CDC has now been marginalized within the White House.

[Video not showing up above? Click here to watch » https://www.youtube.com/watch?v=TAiYDCMYhU0]

"CDC has generally been regarded as the best in the game," Morrison said. "I don't think they anticipated the technical difficulty or the speed with which the virus has been moving. The virus was racing out ahead of them."

On New Year's Eve, Chinese scientists informed the U.N. health organization about a cluster of 27 pneumonia cases of unknown cause in the industrial megalopolis of Wuhan that they linked to the city's wholesale fish market. Less than two weeks later, the Chinese had sequenced the virus's genetic makeup and provided it to the world.

Within days, German scientists had developed a test that could identify a unique part of the virus's DNA. The WHO quickly adopted the German test, publishing technical guidelines on Jan. 17 and working with private companies to produce testing kits.

As they have done with some past outbreaks, officials at the CDC headquarters in Atlanta decided to develop their own test, focusing on three gene targets distinct from what the WHO used. Over the decades, the headquarters lab had built a track record of being among the first to develop tests for new diseases and quickly making them available for disease tracking.

[Video not showing up above? Click here to watch » https://www.youtube.com/watch?v=dl4F-iJedyo]

The CDC published the technical details for its covid-19 test on Jan. 28, 10 days after the WHO. By then, the virus had already been in the U.S. for at least two weeks.

Over the past two weeks, U.S. testing capacity has surged, with private companies joining in. LabCorp began providing tests March 5, and Quest Diagnostics followed four days later. Tests also are being conducted at hospitals and other centers.

Only in the past few days has the United States finally begun testing more people each day than far smaller South Korea, according to data complied by Johns Hopkins University.

Information for this article was contributed by Maria Cheng of The Associated Press.