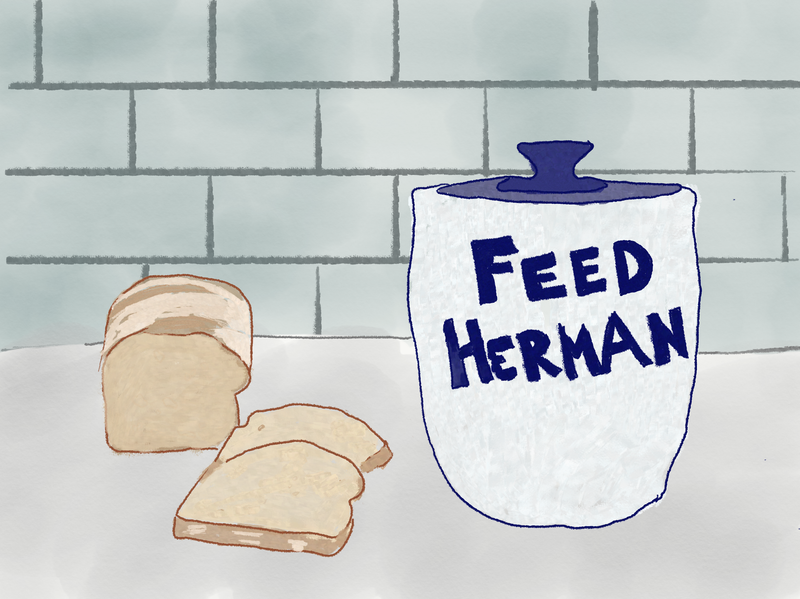 As promised, here are three recipes for making your own sourdough starter.

First up is this "easy" starter from Kneadlessly Simple by Nancy Baggett.

½ cup all-purpose flour, plus more for daily and maintenance "feedings"

In a medium glass bowl or large, wide-mouth jar, thoroughly stir together ½ cup flour and the 1/8 teaspoon yeast. Stir in enough water to moisten mixture to the consistency of gravy. Loosely drape with a clean towel. Let mixture stand 8 to 10 hours at room temperature, stirring every few hours, if possible.

For the next 3 to 4 days, add an additional 5 tablespoons flour and 4 to 5 tablespoons chlorine-free water daily, stirring every so often. Add only enough water to maintain gravylike consistency.

On day 4 or 5, pour off and discard about a third of the mixture, then feed as usual with 5 tablespoons flour and 4 to 5 tablespoons water daily for the next 4 or 5 days. Use starter as directed in recipes.

To refresh starter for baking: Pour off and discard about a third of the mixture and stir in 1 cup flour and about ½ cup water. Let starter stand for at least 4 hours, or until bubbly. Stir down and use as directed.

To maintain starter: Transfer mixture to a clean, large container. Add ½ cup flour and ¼ cup water or enough to maintain a pancake-batter like consistency. Loosely cover starter (do not use tight lid), once it is bubbly, refrigerate. After about 1 week, stir; then pour off and use, give away or discard about a third of the mixture; then feed the remainder by stirring in 5 tablespoons flour and ¼ cup water. Return to refrigerator and repeat weekly.

This version uses the cooking water from potatoes, but not the actual potatoes.

In a medium saucepan, combine the potatoes and quart of water. Cook over medium heat until tender, about 20 minutes. Drain the potatoes, reserving 2 ½ cups of the cooking water; reserve potatoes for another use. Cool the cooking liquid to lukewarm (110 degrees).

In a large bowl, combine the 2 ½ cups potato water, the dry yeast and sugar. Let sit until bubbly, about 5 minutes. (If the yeast does not bloom, discard the mixture and begin again with a new yeast.) Add the flour and stir vigorously to work air into the mixture. Cover with a towel let sit in a warm, draft-free place for 8 to 12 hours. (The mixture should become very bubbly.) Use immediately or cover loosely with plastic wrap and store in the refrigerator.

Preserving the starter: Each time you remove a portion of the starter for a recipe, reserve at least 1/4 cup and replace the amount you have taken out with equal amounts of flour and water.

For infrequent baking or if you have to be away longer than a week, store the starter in the freezer in an airtight freezer container (freezer bags work well). Thaw the starter overnight to 2 days before you plan to bake with it. Refresh as indicated above with 1 cup each of flour and warm water. Cover and leave at room temperature 12 hours or overnight before using.

And finally, our old friend Herman.

Herman is notorious in the Alley. According to columns written by my predecessors, Herman was quite the hungry beast, requiring frequent feeding and tending and nearly took over kitchens across Arkansas in the 1980s. But Herman was also well-loved by many Alley Kats.

The original Herman called for potato flakes, but modern cooks will need to use fresh potato as the preservatives in potato flakes will prohibit fermentation.

The Idea Alley Cookbook, available here, features the starter recipe as well as a sourdough loaf and banana bread made with it on pages 65-66.

Place water, sugar and potatoes in a jar and mix well with a wooden spoon. (And that's right: no flour.) Cover jar with a paper towel secured with rubber band. (The paper towel cover is important as it allows the starter to breathe.) Leave starter on counter to sour for several days. Stir occasionally. When it is real bubbly, feed it and let it sit at room temperature for 3 to 4 hours or until bubbly again.

To feed: Stir in thoroughly ½ cup sugar, 1 cup water and 3 tablespoons potatoes. Feed after each use or every 5 to 7 days when not used. (If not used, throw away the amount you would have used — about 1 cup — before feeding.) Cover again with paper toweling secured with a rubber band. Store in refrigerator after mixture begins bubbling nicely. Never seal the starter container as the starter needs to breathe.

Next week: Recipes that use sourdough starter.

Please include a daytime phone number.