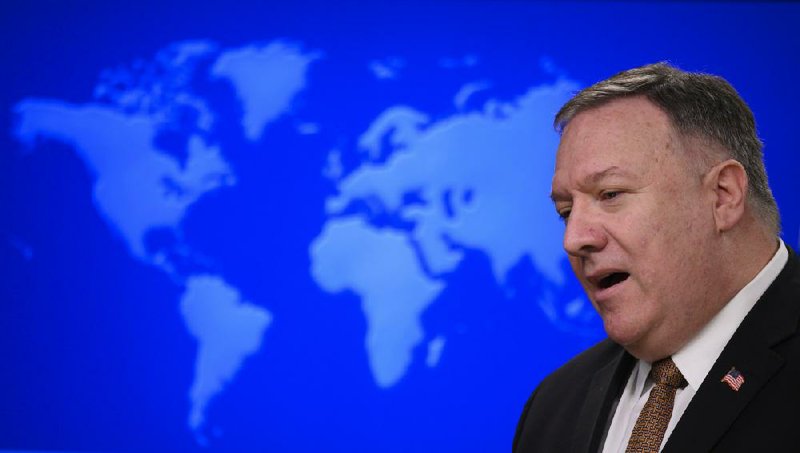 “The Chinese Communist Party poses a substantial threat to our health and way of life, as the Wuhan virus outbreak clearly has demonstrated,” Secretary of State Mike Pompeo said Wednesday at the State Department. (AP/Andrew Caballero-Reynolds)

Foreign ministers representing seven major industrialized nations failed to agree on a joint statement Wednesday after the Trump administration insisted on referring to the coronavirus outbreak as the "Wuhan virus," three officials from G-7 countries told The Washington Post.

Other nations in the group of world powers rejected the term because they viewed it as needlessly divisive at a time when international cooperation is required to slow the global pandemic and deal with the scarcity of medical supplies, officials said.

Secretary of State Mike Pompeo has brushed off criticism of his use of the term, saying it's important to point out that the virus came from the Chinese city of Wuhan and that China's government had a special responsibility to warn the world about its dangers.

At a briefing Wednesday, Pompeo said "this isn't a time for blame, this is a time to solve the global problem" even as he again referred to the "Wuhan virus."

When asked about a report that his insistence on including the term caused a rift at the G-7 meeting, Pompeo did not deny the claim but said that any disagreements among the group were tactical and not sweeping in nature.

"Make no mistake about it, everyone in that meeting this morning was very focused on making sure that we not only solve the health crisis associated with the Wuhan virus but also the economic challenges that face the globe as we confront it as well," Pompeo told reporters at the State Department.

The Centers for Disease Control and Prevention and the World Health Organization have discouraged referring to the novel coronavirus by a geographical denomination over concerns that such terms are correlated with a rise in discrimination and targeted violence against Asian-Americans.

Trump and some Republican lawmakers have referred to the outbreak as the "China virus."

[Video not showing up above? Click here to watch » https://www.youtube.com/watch?v=UP-d2xb-Tsc]

However, Trump said in an interview Tuesday with Fox News that he'll stop using the term "Chinese virus."

Trump cited the Ebola virus and Lyme disease as other illnesses named for their location of discovery. "They do name it after places, it came from China," he said. He also said he maintains a "very good" relationship with Chinese President Xi Jinping and that China had been though "a lot."

"They lost thousands of people. They've been through hell," he said.

Also on Tuesday, Trump tweeted his support for Asian-Americans, who have increasingly faced racial taunts and incidents in recent weeks as the illness spreads across the U.S. and Republican politicians highlight its "Chinese" origins. The World Health Organization named the disease covid-19 -- short for "coronavirus disease 2019" -- in part to avoid stigmatizing any one place or group for a virus that poses risks to everyone.

Pompeo, in his remarks Wednesday, doubled down on his criticism of Beijing.

"We tried, you'll remember, from the opening days to get our scientists, our experts on the ground there so that we could begin to assist in the global response to what began there in China, but we weren't able to do that. The Chinese Communist Party wouldn't permit that to happen," he said.

"The Chinese Communist Party poses a substantial threat to our health and way of life, as the Wuhan virus outbreak clearly has demonstrated," Pompeo added.

One European official said there were multiple disagreements among the G-7 members Wednesday but acknowledged that "Wuhan virus" posed the most significant obstacle. Besides viewing the term as inappropriate, some officials noted that experts could not say with absolute certainty that the virus came from Wuhan until further research is conducted.

When asked about the disagreement, a State Department spokesman noted that the group of nations issued a joint statement on March 16 concerning the pandemic.

Information for this article was contributed by John Hudson and Souad Mekhennet of The Washington Post; and by Karen Leigh of Bloomberg News.