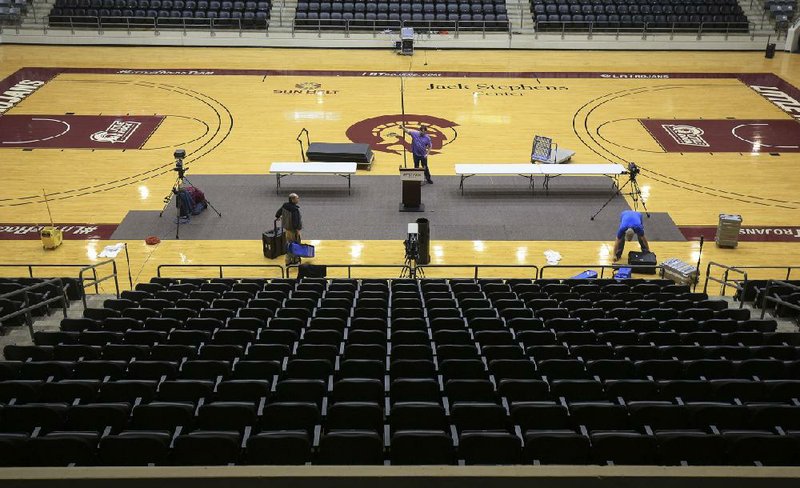 Workers from Arkansas PBS and the Arkansas House of Representatives set up Wednesday in Little Rock for state representatives to meet in special session beginning today in the Jack Stephens Center on the campus of the University of Arkansas at Little Rock. More photos at arkansasonline.com/326House/. More photos at arkansasonline.com/326house/. (Arkansas Democrat-Gazette/Staton Breidenthal) ( Arkansas Democrat-Gazette / Staton Breidenthal)

Gov. Asa Hutchinson on Wednesday summoned the Arkansas General Assembly for a special session, starting this afternoon, to consider a bill that would authorize him to use $173 million in surplus funds to help fill budget gaps and other needs triggered by the coronavirus pandemic.

"I am very grateful for the leadership of the House and the Senate that have made sure that ... there is broad agreement, and the necessary votes to have this passed in a timely fashion without extending the length of the session, which is not what anyone wants to do," the Republican governor said.

The goal is for the session to last the minimum three days necessary under the constitution. The surplus is needed because the state budget was cut for the remainder of this fiscal year, which ends June 30.

The House and Senate are scheduled to convene at 1 p.m. today, with the 100 House members situated apart from each other in the stands at the Jack Stephens Center at the University of Arkansas at Little Rock, and the 35 senators in their end of the state Capitol, but with some members spread out on the Senate floor and into the galleries.

Both bodies will consider temporary rules to allow for proxy votes for members not in attendance.

House Speaker Matthew Shepherd, R-El Dorado, said numerous medical and health care professionals recommended "looking to a larger venue, where we could stay spread out, and, just looking for other options, the Jack Stephens Center was just something that came to mind."

Normally, representatives would be in their seats, closer to one another than currently recommended, in their chamber in the Capitol.

"Early on, I asked the medical professionals if this is overkill for us to move out of the House chamber and the indication was no, that this was appropriate if we had the opportunity to be able to do this, that it would provide a better venue," Shepherd told reporters in a conference call.

House and Senate leaders said they expect to wrap up action within three days by meeting today, Friday afternoon and then shortly after midnight Friday, or early Saturday morning. For health reasons, the sessions will be closed to the public, but videostreamed.

Identical House and Senate bills would create the Covid-19 Rainy Day Fund and move the $173.6 million surplus into that fund.

The measures would require the state's chief fiscal officer to use the fund to provide money for spending authorized by the General Assembly and "to offset general revenue reductions, funding needs, and unanticipated needs created by the covid-19 crises."

Hickey said his amendment also would add the speaker and president pro tempore to the council's committee to consider funding requests.

He said his amendment would allow proposed uses of the money to be considered by lawmakers with "a true and fair representation" of constituents across the state.

Hickey said he doesn't have anything against the House and Senate leadership who would make those decisions under Hendren's and Shepherd's bills.

Asked about Hickey's amendment, Hendren said, "I don't necessarily think his [proposal] is worse or better.

"The governor believes and I think the leadership ... also agree that in this time of crisis, requiring a legislative committee to convene and take action on every spending item until the end of the fiscal year could cause us problems," he said. "We don't want cuts in the Health Department or [Department of Human Services] in the midst of a health crisis, so there has to be the flexibility to use dollars to fill those holes and it has to be done quickly."

Hendren said each lawmaker will be notified of every request and its approval. They will learn where each dollar was spent.

On June 30, the last day of fiscal 2020, the chief fiscal officer would transfer any remaining funds in this rainy-day fund back to the general revenue allotment reserve fund, which is the repository for unallocated surplus funds, under the bills.

Hutchinson said the special session is necessitated by his administration's $353.1 million cut to the general revenue budget to $5.38 billion in fiscal 2020.

The Republican governor has attributed the budget cut to a projected reduction in state tax collections from job layoffs and business slowdowns in the next three months, as well as from moving the April 15 individual income tax filing and payment deadline to July 15 to mirror the federal government's extension of these deadlines. The layoffs, business slowdowns and filing changes are because of the impact of the coronavirus pandemic.

Hutchinson said the state has significant balances in the state's Medicaid trust fund and educational adequacy fund, but "it is clear that the [$173 million] is not going to stop us from being constrained in the other agencies.

"We are most likely going to be giving guidance about reducing travel, about looking for ways to shorten the budget or reduce the budget for the last three months [of fiscal 2020] and reduce the expenses, so it is going to be a tightening of the belt," he said.

"But we have an obligation on [funding an adequate public] education," he said. "Obviously, Medicaid is critical now. It's a safety net and those numbers are going to go up as people go to apply for Medicaid. The [Supplemental Nutrition Assistance Program] benefits, those numbers have already gone up, even though it's a federal program.

"This is just simply called managing the budget and we don't want to use all of the [$173 million surplus] because we've got other needs in the state and want to be able to make sure that if we have to put money toward ventilators or some other need, that we have got the cushion to do that," Hutchinson said.

UA-Fayetteville spokesman Mark Rushing said Tuesday night that "at this time, the health and safety of our university community is our primary concern.

"We know future funding will be impacted too, but it will likely be some time before we are able to fully assess that portion of the pandemic's impact on the university," he said in a written statement.

Asked how UAMS plans to deal with the budget cut, UAMS spokeswoman Leslie Taylor said Wednesday, "We don't have a comment at this time."

ASU System spokesman Jeff Hankins said Tuesday night that the state budget cut on the ASU System is $6.4 million between now and June 30, including a $2.35 million reduction for Arkansas State University-Jonesboro.

"Through careful financial management, each of our institutions has cash reserves to help address this shortfall," Hankins said in a written statement. "Nonetheless, we have asked each institution to develop a plan to reduce spending and minimize use of reserves for the remainder of the fiscal year. We are confident this can be achieved without loss of existing jobs."