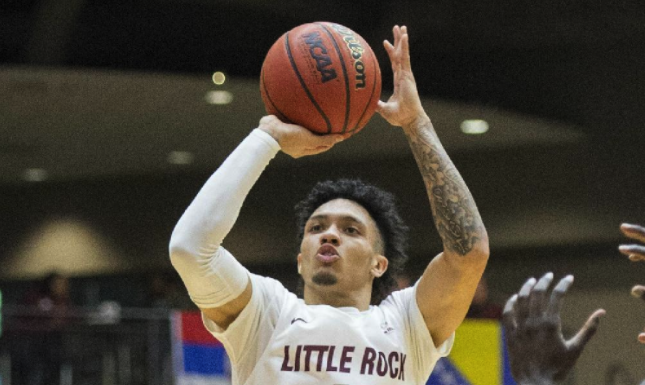 Junior guard Jaizec Lottie, who averaged 6.4 points per game this season for UALR, has entered the transfer portal and will not return for the Trojans next season. (Democrat-Gazette file photo)

Jaizec Lottie was a key figure in the University of Arkansas at Little Rock's stirring turnaround this basketball season.

The 6-1, 180-pound junior guard provided experience in a rotation that wasn't loaded with it. He served as a reliable ball handler to complement sophomore Markquis Nowell, and he was an asset as both a scorer and defender.

But with his name now in the transfer portal with one season of eligibility left, Lottie is seeking to increase his role elsewhere.

"I think the situation where, at the end of the game, the ball is in my hand -- I can decide if I want to take the shot or if I can create for my other teammate," Lottie told the Arkansas Democrat-Gazette. "I want to be the leader on [a] team, and I want coach to walk in every day and be excited to see me, be excited to see me get better."

Lottie is one of two players from this season's roster who will transfer. Sophomore forward Horace Wyatt Jr., who did not play this season, is also transferring. Lottie made his decision public in a tweet March 15.

Lottie didn't want to delve deep into specifics, but he cited differences between he and UALR Coach Darrell Walker, stating that the two didn't always "see eye to eye."

"I felt as if he didn't give me the respect that I wanted from a coach. I didn't feel like he necessarily wanted me there, and sometimes he made that clear and sometimes he made it clear that he did want me there," Lottie said. "It was a great year, don't get me wrong, because we were winning and I love my teammates. But mentally wise, it was a tough year to keep going forward, and I just didn't want to do another year of that."

Walker told the Democrat-Gazette that he wasn't surprised by Lottie's decision.

"Did I think somebody was probably going to leave the team? Yeah. You just never know as a coach," Walker said. "We thank Lottie for what he's done. He's moved on, and he wants to be a starter, I assume. I don't know where he's going. I wished him luck, and we've moved on.

"I never fall in love with anybody, and that's because I come from a professional level where guys can be here and guys can be gone."

Lottie finished the season averaging 24.5 minutes, 6.4 points, 3.1 assists and 2.4 rebounds per game, as well as shooting 52.1% from the field. He started five of the 29 games in which he played. Over his first two seasons, Lottie had combined for 48 starts in 55 appearances.

He said he doesn't have any regrets about his UALR career, one that began with Wes Flanigan as head coach for his freshman year in 2017-18 before Walker was hired to take over in March 2018.

In Lottie's first two seasons, the Trojans were a combined 17-46. UALR went 21-10 and won the Sun Belt regular-season championship outright this season, before the coronavirus pandemic halted their quest at an NCAA Tournament berth.

"I'll remember this season as the championship team -- the team that turned Little Rock around and really caught people's attention into wanting to come to games, wanting to see more of Little Rock basketball," Lottie said. "We were brothers, man. We were together -- most together team I've ever been on.

"It was a fun environment, and I'm definitely gonna miss that a lot."

UALR is expected to return most of the team next season, but Lottie's departure creates a hole in the backcourt. He gave the Trojans a versatile combo guard who had the ability to score, but also run the offense.

Freshman guard Isaiah Palermo, who played in 23 games and averaged 14.2 minutes this season, and junior guard Alsean Evans, who missed nearly the entire season with a toe injury, could fill that void.

Denver is an attractive landing spot, Lottie said, because it's within earshot of his hometown. He also has a close relationship with former NBA All-Star and Denver native Chauncey Billups, whose younger brother, Rodney, is the head coach at Denver.

"It definitely is an attractive option," Lottie said.

Lottie doesn't have a timeline for a decision, and the unpredictability of the coronavirus pandemic has added an extra obstacle. The NCAA has suspended all on- and off-campus recruiting through at least April 15, so it's unclear when he and other transfers nationally will be able to take visits.

For now, Lottie is back home in Aurora finishing the semester online. Wherever he ends up, he'll likely have to sit out a year before he's eligible, although he said he intends to apply for a waiver to play immediately.

"It has me concerned, just because that schools can't do a lot of stuff that they're supposed to do in the whole recruiting process," Lottie said of the current climate. "But at the same time, I feel like God will have me where I'm supposed to be, at the time I'm supposed to be. In situations like this, I just try to control the things I can control." 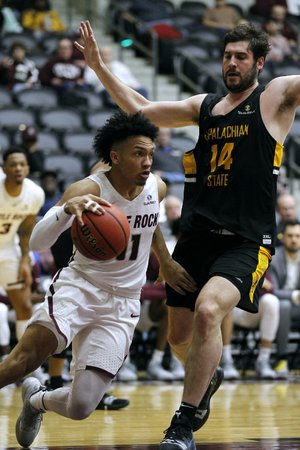 Photo by Thomas Metthe
Guard Jaizec Lottie (left), who played at UALR and has entered the transfer portal, said he has received interest from schools such as the University of Denver, Idaho, Oral Roberts, California Baptist and SIU-Edwardsville. (Arkansas Democrat-Gazette/Thomas Metthe)