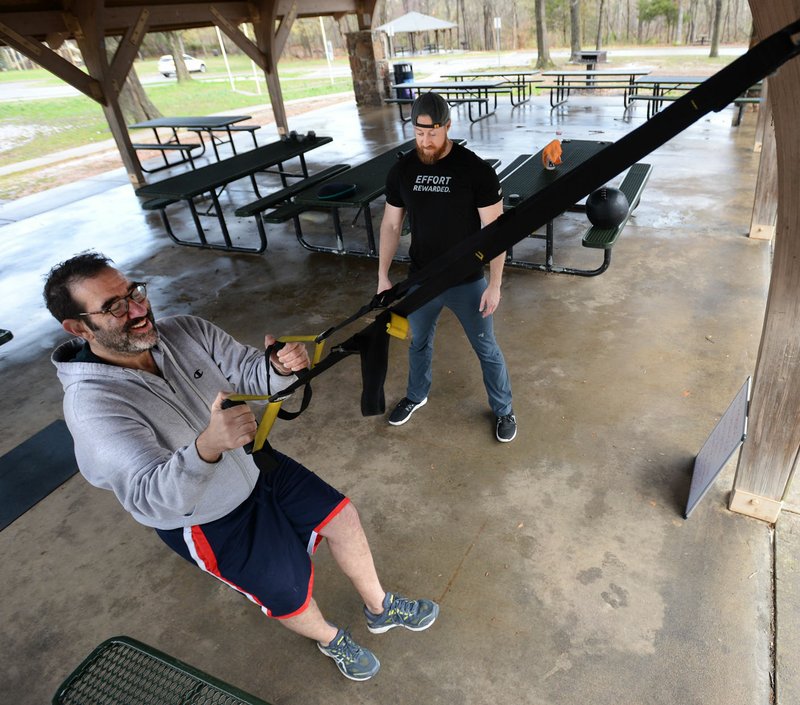 Tim Watson (left), an attorney in Fayetteville, does pistol squats Tuesday with the help of health coach Jim Goza as Watson prepares for his wedding in June at Veterans Memorial Park in Fayetteville. Goza works for Clubhaus Fitness and is meeting club members outside for workouts to allow for fitness with social distancing now that the gym has closed because of the covid-19 pandemic. "We are doing everything we can do to stay as innovative as possible. Right now we all need to be as healthy as possible," Goza said. Go to nwaonline.com/200325Daily/ for today's photo gallery. (NWA Democrat-Gazette/Andy Shupe)

ROGERS -- Bruce Williams had to close his fitness facility by state order last week. He still leads workouts online for his members.

"I lent a bunch of my equipment, like dumbbells and benches and mats, to as many people as I could and have been doing everything virtually," said Williams, who has run Abnormal Fitness Club in Bentonville for nearly five years.

His members have been supportive, and none have quit their memberships yet, he said. But he foresees trouble for himself if the state's shutdown of gymnasiums continues for more than a couple of months.

"I'm still sleeping at night," he said. "But if I look at the future, I can't imagine paying the money they pay me to not have a facility open. And as people start losing jobs, then the first thing that's going to go is their gym membership."

Gov. Asa Hutchinson ordered all gymnasiums closed March 19 as the number of confirmed coronavirus cases climbed. With that, many gym owners such as Williams scrambled to accommodate members' fitness needs in a different way.

Trevor Belline has owned CrossFit 540 in Springdale since 2009. He has between 100 and 200 members, he said. Members are getting workouts delivered to them via video. CrossFit 540 has checked out equipment such as barbells, dumbbells, kettle bells, medicine balls, benches and exercise bikes to more than 70 members.

"We're pretty lucky," Belline said. "I've got a great community, and they believe in the product and the process."

He's confident his business will be fine if the shutdown lasts a few months. If it lasts longer, that's a "whole other conversation," he said.

Abigail Zimmerman and Kayla Nyce co-own a yoga studio, The Yoga Loft, in downtown Rogers. They closed the facility March 18.

"We wanted people to feel safe and be able to practice at home if they felt coming in wasn't the safest option," Zimmerman said. "We also wanted our staff to feel safe and not feel like they had to come into work and come into the studio."

They, too, are offering classes online -- some live, some prerecorded. Zimmerman hopes they'll gain some clients through the online delivery. Yoga newcomers who might feel intimidated by the thought of joining others for the first time can test the water in the comfort of their own home, she said.

Stuart Walker, owner and founder of Clubhaus Fitness on Dickson Street in Fayetteville, said he laid off about half of his staff in the wake of the state's gym shutdown.

He decided if he couldn't offer classes indoors, he'd move outdoors. Clubhaus offered "Quaran-train" exercise classes in the gym's parking lot or in the parking deck of a nearby condominium complex for the first three days of this week. Classes were limited to six people, and they were instructed to keep at least 12 feet between them, Walker said.

"We'll call them out if they get too close to each other," said Stuart Walker, owner and founder of the fitness center.

Walker ran the plan past an attorney and the Fayetteville Police Department. Dozens of Clubhaus members showed up for classes between Monday and Wednesday.

Late Wednesday afternoon, however, a police officer told him he had to stop the classes.

Walker believes the city acted on a complaint, but that doesn't necessarily mean the city's interpretation of the law is correct. He is working with his attorney on the matter and said there's a good possibility Clubhaus will be allowed to continue holding outdoor classes.

He noted restaurants can still operate and serve food through carryout and drive-through lanes, despite the fact many restaurant employees work together in a small space.

"This is our drive-through lane," Walker said about the outdoor classes.

"We want to be a part of the solution in this thing," he said. "This is not just about our business. If we can get out and help people with the cabin fever, to me it's crazy not to do that, and maybe more gyms will take this approach."

Brock Gearhart, a Clubhaus member, got a workout in on Tuesday with the club. He normally goes to the club three times a week, he said.

"You just look for ways to remain fit and in shape and take care of yourself, and the biggest thing about Clubhaus is it provides community," said Gearhart, 37. "So with the gym closing, you lose that community temporarily."