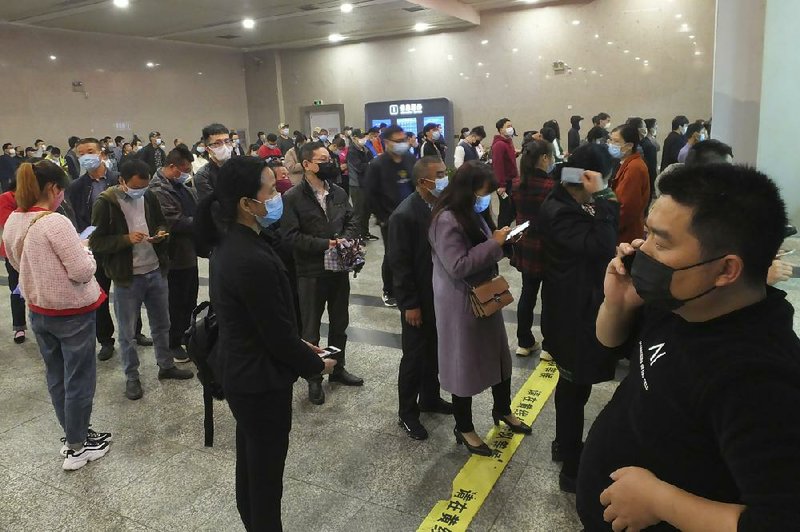 Travelers line up to buy tickets Wednesday at a railway station in Yichang in central China’s Hubei province as trains began carrying factory employees back to work after a two-month lockdown. More photos at arkansasonline.com/326virus/. (Chinatopix via AP)

China is winning its "people's war" against the coronavirus. That's the message being sent by Chinese leaders and diplomats and amplified by the Communist Party-controlled press.

A central part of the narrative is that Wuhan, the one-time center of the outbreak and the site of a recent visit from Chinese leader Xi Jinping, has stopped transmission of the virus in its tracks. It went five days without reporting new, local cases. On Monday, Wuhan reported one new case.

In a country emerging from a crushing lockdown -- and a world looking for answers -- lower case counts appear to be genuinely good news. Other countries have closely watched the crisis in Wuhan for lessons on how best to control a local outbreak.

But Wuhan's near-zero count is being called into question by independent reporting and met with suspicion from experts. It underscores wider issues across China. The country's overall coronavirus numbers have been met with some skepticism since the first signs of crisis.

Separate reports from Chinese, Japanese and Hong Kong media suggest the dearth of new cases in Wuhan may reflect a dip in testing. And public-health experts also note that China does not include confirmed asymptomatic cases in their figures -- a potential blind spot.

These gaps are particularly worrying because as of Wednesday tens of millions of residents of Hubei province were able to move around for the first time in months. Though Wuhan, the provincial capital, will remain in lockdown, some fear another wave of cases could be possible as people start to travel into and around the Chinese heartland.

"Zero cases, in this case, has more of a symbolic meaning," said Yanzhong Huang, a senior fellow for global health at the Council on Foreign Relations.

"It is telling people, 'everything is safe, it is time to go back to work, it is time for business to go back to normal,'" he continued, "To show the outside world how effective the Chinese approach is and how it can provide a viable alternative to Western approaches."

Residents of Wuhan are allowed out of the city but cannot leave Hubei until April 8.

Most access to Wuhan, a manufacturing center of 11 million people, or 1½ times the population of New York City, was shut down Feb. 23. The city is 450 mile west of Shanghai.

Restrictions that would expand to become the most intensive anti-disease controls ever imposed spread to Huanggang and the nearby cities of Ezhou, Chibi, Qianjiang, Zhijiang, Jingmen, Xiantao, Xiaogan and Huangshi.

At the peak of China's restrictions, some 700 million people were in areas covered by orders or official requests to stay home and limit activity.

But even China's premier, Li Keqiang, warned local governments Monday not to "cover up" reporting coronavirus "for the sake of keeping new case numbers at zero."

China's lockdown of Wuhan and much of Hubei province was unprecedented. Flights and trains were stopped, public transportation was suspended and businesses have been shuttered -- not for days, or weeks, but for two months.

Though China's methods included draconian tactics, such as locking people in their apartments and intensive surveillance, the world is looking to Hubei to see what tactics might work.

It is clear that the situation in Wuhan has improved dramatically.

Reporting from Wuhan in late January and February showed overburdened hospitals where doctors were collapsing and patients were being treated in corridors.

On March 10, more than two months after the lockdown started, Xi visited the city, a signal to local officials that ordinary life should soon resume. The next week Wuhan reported zero new cases for the first time since the outbreak began.

But independent reporting has tested the claim. A report Monday from Caixin, a Chinese outlet that has offered groundbreaking coverage of the crisis, found that the virus may still be spreading in the city.

"There are still a few or a dozen asymptomatic people every day," an unidentified official at the Chinese Center for Disease Control and Prevention was quoted by Caixin. "It can't be determined whether transmission has been completely cut off."

China, unlike other countries, only counts patients with both a positive test and symptoms, meaning that someone who is tested and is confirmed to have the virus but remains asymptomatic may be statistically invisible.

The South China Morning Post of Hong Kong reported that it saw classified Chinese government data suggesting that more than 43,000 people in China had tested positive for the virus by the end of February without showing symptoms.

If that figure is true, about one-third of China's cases were asymptomatic -- a type of case that researchers around the world are still desperately trying to understand.

There are questions, too, about the rate of testing. Another Hong Kong news outlet, RTHK, talked to people in Wuhan who claimed they were being denied testing in an attempt to keep case counts low.

Japan's Kyodo news quoted an unnamed Wuhan doctor saying that testing was being suspended in the wake of Xi's visit to shore up the premise that the battle has been won.

The Washington Post has not independently confirmed these accounts.

A Post account of the early days of the outbreak in Wuhan showed how secrecy and censorship fueled the spread of the virus across China and around the world. In January, local officials stopped recording new cases ahead of a Communist Party conclave in Hubei province. China also failed to give critical data to the World Health Organization.

By putting a positive spin on data from Wuhan, officials are likely trying to heed Xi's call to get the economy moving.

China is struggling to "find a balance between fighting the virus and killing the economy," said Dali Yang, an expert on Chinese politics at the University of Chicago.

As Wuhan looks ahead to the end of its lockdown on April 8, authorities will need to step up testing, not reduce it, said Jennifer Nuzzo, an epidemiologist and senior scholar at the Johns Hopkins Center for Health Security.

"It is critically important to maintain vigilance," she said. "Now is not the time to declare victory."

Renault said its factory in nearby Shiyan reopened March 11 and a Wuhan factory is scheduled to restart March 30.

Dongfeng said its own factories in Hubei were approved to resume production as of Monday.

Information for this article was contributed by Emily Rauhala of The Washington Post; and by Joe McDonald, Yu Bing and Mari Yamaguchi of The Associated Press.