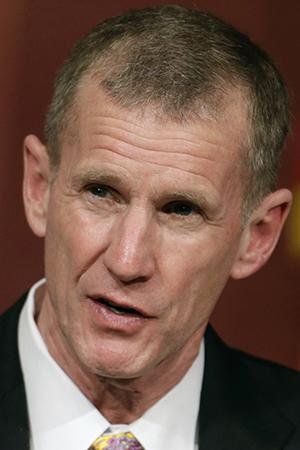 Shown in this March 11, 2013, photo is Stanley McChrystal, the retired general and former commander of U.S. troops in Afghanistan. (AP Photo/Steven Senne).

WASHINGTON -- For more than 18 years, the U.S. military has been defined by Washington's wars overseas, with hundreds of thousands of troops rotating through far-flung hot spots, fighting battles in places many Americans can barely pronounce or find on a map.

But as the coronavirus pandemic sweeps across the United States and the public looks for a response from its armed forces, many military and civilian leaders at the Pentagon are trying to answer one question: What is the U.S. military's role in trying to safeguard the country from a new enemy, one that is now taking a deadly toll within its borders?

Some military officials say the Defense Department can do all of it: prepare for a potential war with China and Russia, fight the Islamic State group and rush field hospitals to Seattle and New York.

"The president says it's a war. It is a war," Gov. Andrew Cuomo, D-N.Y., said on Tuesday in describing how to fight the pandemic. "Well, act like it's a war."

But the Pentagon has yet to join the fight with full force.

In a message to his Marine Expeditionary Force on the West Coast last week, Lt. Gen. Joseph Osterman described his priorities, encapsulating the Pentagon's stance on the virus thus far.

"This is all about force preservation, readiness and being good neighbors to our adjacent communities," he said in an email obtained by The New York Times.

The Pentagon's decision to initially distance itself from the country has made the U.S. military's response piecemeal, said Stanley McChrystal, the retired general and former commander of U.S. troops in Afghanistan until he was fired in 2010 by former President Barack Obama.

"My sense is that the mission to defend America against enemies, foreign and domestic, should be interpreted to include even unconventional threats like the ongoing pandemic," McChrystal wrote in an email. "I believe they can, should, and ultimately will be required to do much more."

The U.S. military is recognized as a formidable fighting force, with logistical, communications and supply networks that excel in extremes. The people now calling on the military to help think more can and should be done, as a number of governors, mayors and municipal officials in cities across the United States have made television appearances to plead for aid from the Defense Department.

"The military has extraordinary medical capacity of its own that's been honed in fighting wars," Mayor Bill de Blasio of New York City told NBC's Meet the Press on Sunday. "They can handle any situation. All that great personnel who are medically trained should be sent to places where this crisis is deep, like New York, right now."

In particular, the armed services know how to set up command-and-control centers, how to stock warehouses and how to transport doctors, nurses and medical materials around the country, and quickly.

Gen. Mark Milley, the country's top military officer, said Monday that two Army field hospitals would arrive in New York and Seattle by today, taking to each city the ability to care for an additional 248 patients.

The hospitals, one to each city, will have 11 ventilators each.

Other mobile combat hospitals are prepared to deploy and may soon be headed to stricken areas, Milley said. The Mercy, the Navy hospital ship based in San Diego, is bound for Los Angeles with its 1,000 beds.

But critics say that is not enough and that the deployments do not scratch the surface of what one of the world's most powerful militaries -- and the country's top logistical organization -- is able to accomplish.

The Pentagon has "lost precious time, especially in terms of planning a military response," said Paul Eaton, a retired major general and a veteran of the Iraq War, who now serves as a senior adviser at VoteVets.org. "Now we have a situation where the military response is like whack-a-mole, trying to respond to hot spots as they pop up."

He said the Pentagon "must unleash the military planners to plan now for a wider response, to ensure every area gets what it needs, without putting undue strain on our resources."

President Donald Trump has yet to announce any sort of nationwide quarantine, so there is little the active-duty military can or should do to enforce recommendations for social distancing. Pentagon officials are also acutely aware of the image of uniformed troops marching into U.S. cities; they have dealt in recent weeks with rampant rumors on social media of martial law.

With the response to the virus largely done on a state-by-state basis so far, that has meant an increased role for the National Guard. About 9,000 National Guard troops across the country have been called up. 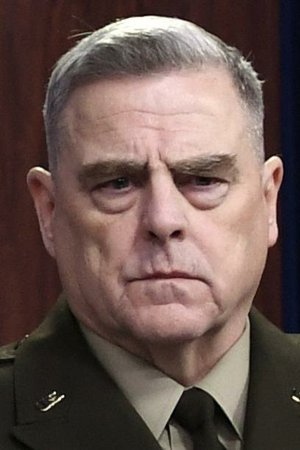