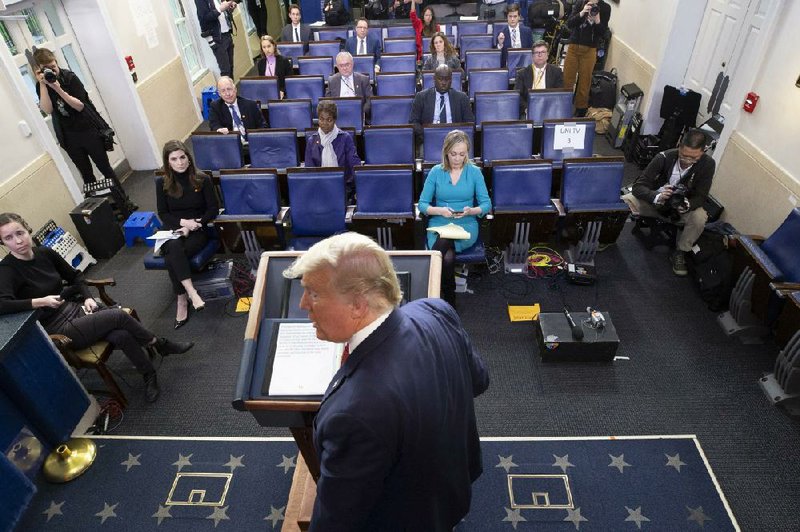 President Donald Trump holds a news briefing Wednesday at the White House. Conservative thinkers, pundits and politicians have been sowing arguments to support a potential relaxing of social-distancing policies, something Trump has suggested in recent days. (AP/Alex Brandon)

At the start of his Tuesday show, conservative radio host Glenn Beck spoke over a music track as he discussed possibly sacrificing lives during the coronavirus outbreak to save the United States.

"I would rather have my children stay home and have all of us who are over 50 go in and keep this economy going and working," Beck said. "Even if we all get sick, I'd rather die than kill the country. Because it's not the economy that's dying, it's the country."

Beck's offer to sacrifice his health and other older Americans' lives for the good of the U.S. economy was made after President Donald Trump spoke in recent days of lifting social distancing policies that have shut down nonessential businesses after a 15-day period ends to "have the country opened up and just raring to go by Easter."

Behind him, conservative thinkers, pundits and politicians have been sowing arguments to support a potential walk-back of the policies that public-health experts say will slow the spread of coronavirus and limit the number of severe cases inundating hospitals.

Beck, for example, suggested Democrats were trying to "jam down the Green New Deal because we're at home panicked." Heather Mac Donald, a conservative thinker and Thomas W. Smith, fellow at the Manhattan Institute, sees the restrictions as "a warm-up for their wish-list of sweeping economic interventions."

R.R. Reno, editor of the conservative religious journal First Things, recently described an "unspoken agreement" among "leaders, public health officials, and media personalities" who "conspire to heighten the atmosphere of crisis in order to get us to comply with their radical measures." He wrote "sentimental humanists" are behind the closures, noting "Satan prefers sentimental humanists" to do his handiwork.

Mac Donald was one of the early voices against aggressive social distancing. She called the shelter-in-place policies mandated by some state officials "unbridled panic" in a March 13 op-ed that downplayed the virus because of low numbers of infections and deaths in the U.S. at the time.

There are now nearly 63,000 confirmed cases and almost 900 deaths in the U.S., but Mac Donald's position remains the same.

The vast majority of coronavirus fatalities will be "concentrated among the elderly and the already severely sick," she argued, who might die of another cause, if not coronavirus. She estimated death rates close to the flu and nowhere near as high as automobile accidents.

Public-health experts have disputed those analogies when discussing the coronavirus pandemic, and new data has shown higher rates of illness and death among young and middle-aged adults than previously expected.

But Mac Donald and others arguing to end the self-isolation that is hampering the stock market don't deny people will die. While the virus might kill thousands, Mac Donald argued, a depressed economy could irreparably harm millions of Americans, young and old.

"The millions of people whose lives depend on a functioning economy also deserve compassion," Mac Donald wrote.

The Wall Street Journal's editorial board agreed the impact on the nation's financial health could potentially be catastrophic, particularly if the stay-at-home orders continue into April, May or even June, as some experts have suggested. The board suggested last week that seeking alternatives that would allow commerce to resume, but stopped short of urging a sudden end to the social distancing policies in place now.

"No society can safeguard public health for long at the cost of its overall economic health, " the editorial board wrote, "Even America's resources to fight a viral plague aren't limitless -- and they will become more limited by the day as individuals lose jobs, businesses close, and American prosperity gives way to poverty."

Others have made similar arguments for returning to normalcy.

Texas Lt. Gov. Dan Patrick, a Republican, suggested to Fox News host Tucker Carlson on Monday that grandparents, including himself, would gladly sacrifice their lives to preserve the financial well-being of their children and grandchildren.

Fox News's Brit Hume defended Patrick's position Tuesday, saying it was a "reasonable viewpoint," adding "the utter collapse of the country's economy, which many think will happen if this goes on much longer, is an intolerable result."

William Bennett, the former Reagan administration education secretary, and Claremont Institute fellow Seth Leibsohn together called the losses attributable to aggressive social distancing policies in place "disproportionate" to the lives that will be lost to coronavirus if Americans don't shelter in place.

Fox News's Laura Ingraham joined in this week, claiming the potential recession could be worse than the Great Depression.

When Jerry Falwell Jr. welcomed students back to Liberty College in Lynchburg, Va., on Tuesday, he said the benefits of returning to classes surpassed the risks for the youthful student body.

"I think we, in a way, are protecting the students by having them on campus together," he told the News & Advance. "Ninety-nine percent of them are not at the age to be at risk, and they don't have conditions that put them at risk."

A less common line of argument that has also been picked up by Trump comes from the religious conservative camp, a sure sign that the debate about public health and the economy has also become part of the nation's long-running culture wars.

Reno, in an article titled "Say No to Death's Dominion," called the widespread shutdowns of nursing homes and churches the result of a "perverse, even demonic atmosphere" that was preventing people from practicing their faith. The closures, he argued, were evidence of Satan preying on the fear of death.

"There are many things more precious than life," Reno wrote Monday. "And yet we have been whipped into such a frenzy in New York that most family members will forgo visiting sick parents. Clergy won't visit the sick or console those who mourn. The Eucharist itself is now subordinated to the false god of 'saving lives.'"

Reno's piece drew a strong negative response in the comments section of the magazine and in some other religious publications.

"If you knowingly recklessly endanger somebody else's life, by acting in a way that might make them catch a lethal virus," Mary Pezzulo wrote in Patheos, "you're killing that person: the same as if you killed your unborn baby by swallowing a chemical you knew might cause a miscarriage."

Trump appeared swayed by concerns about the shutdown of religious services Tuesday, when he selected Easter as the ideal date to reopen America's streets to the public.

"You'll have packed churches all over our country," he continued. "I would love to aim it right at Easter Sunday so we're open for church services."

Meanwhile, the World Health Organization said Tuesday that the U.S. could become the next epicenter of the coronavirus outbreak, even after taking measures to stop the virus's spread.

Yet Trump, supported by a growing number of conservative voices, has appeared less and less committed to the measures his administration recently put in place to combat the pandemic.

"Our people want to return to work," the president tweeted Tuesday in all capital letters. "The cure cannot be worse (by far) Than the problem!"