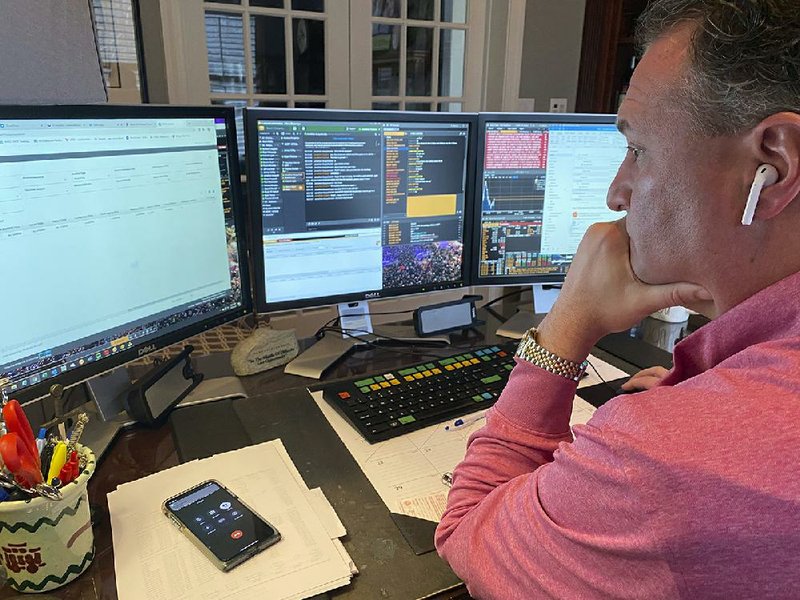 NEW YORK -- Stocks scored their first back-to-back gains Wednesday since a sell-off began five weeks ago, but much of an early rally faded late in the day as a last-minute dispute threatened to hold up a $2 trillion economic rescue package in Congress.

The S&P 500 rose 1.15%, bringing its two-day gain to 10.6%. It had been up 5.1% earlier in the day as Congress moved closer to approving the plan to provide aid to an economy that has been ravaged by the coronavirus. The market is now down nearly 27% since setting a record high a month ago.

Many on Wall Street say they don't think stocks have hit bottom yet, but optimism rose after the White House and Senate leaders announced early Wednesday an agreement on the aid bill. A vote had been expected in the Senate by the end of the day, but then some lawmakers balked at the proposed bill.

GOP Sens. Tim Scott, Ben Sasse and Lindsey Graham demanded changes, saying the legislation as written "incentivizes layoffs" and should be altered to ensure that employees don't earn more money if they're laid off than if they're working. Complicating the standoff, Sen. Bernie Sanders of Vermont said he would block the bill unless the conservatives dropped their objections.

Investors were eagerly waiting for the aid in the rescue package, which lawmakers hope will help blunt the blow to the economy as businesses shut down to slow the spread of the coronavirus.

"They're hitting on all the right elements of what the U.S. economy needs during the shutdown to bridge itself to the other side to open up economic activity," said Darrell Cronk, chief investment officer of Wells Fargo Wealth and Investment Management.

But even optimists say the package provides just the second leg of three that markets need to regain lasting confidence. The Federal Reserve and other central banks are also offering aid by cutting interest rates and supporting lending markets, but investors say they need to see the number of new infections peak before they can feel comfortable knowing how deep the looming economic downturn will be.

Investors also are waiting to see the details of Washington's plan, which will include direct payments to most Americans and aid for hard-hit industries. It's unclear when the House could vote on the plan.

"It's too early to call a bottom because there's way too much uncertainty," said Tony Rodriguez, head of fixed-income strategy at Nuveen.

Ed Yardeni, president of Yardeni Research, said the country needs to get the virus under control before the economy can breathe on its own, especially as numerous industries have shut down.

This is a world war against the virus," he said. "While we spend money to soften the blow on workers and companies, we need to mobilize resources to fight the war. There is a desperate need for millions of masks, ventilators and a Manhattan Project for finding a cure."

The Manhattan Project was the secret and enormous undertaking by the United States during World War II that resulted in creation of the atomic bomb.

With widening areas of the economy shutting down and layoffs mounting, economists are sure a steep drop-off is coming. They're forecasting that a report today will show that a record number of Americans filed for unemployment benefits as layoffs sweep the country.

The market also has had a couple of days within the past few weeks that packed entire years' worth of losses, including one drop of 12% and another of 9.5%. The last time the S&P 500 had a back-to-back gain was Feb. 12, a week before the index set its record high.

Boeing soared 24.3% Tuesday in part on expectations that it stands to gain from the aid package brokered on Capitol Hill. Other travel-related stocks also stormed higher to recoup a fraction of their losses over the past month. Royal Caribbean Cruises jumped 23%, but it's still down by 68.2% for the year.

Information for this article was contributed by Stan Choe, Damian J. Troise and Alex Veiga of The Associated Press; and by Rachel Siegel and Thomas Heath of The Washington Post.