Top grad transfer says Musselman is coach who stands out 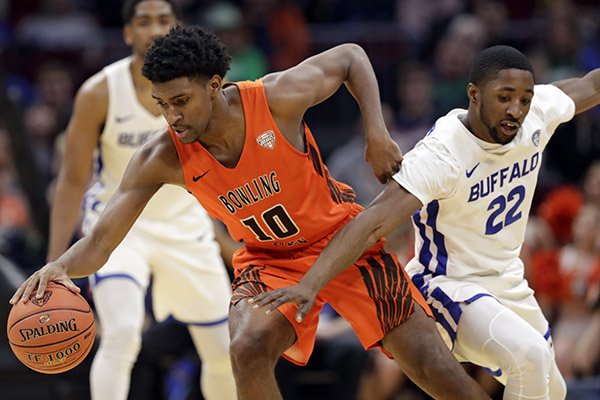 Graduate transfer guard Justin Turner, who has been labeled as the top player in the NCAA transfer portal, mentioned Arkansas Coach Eric Musselman as a coach who stands out.

During a podcast interview with college basketball insider Jeff Goodman on Wednesday, Turner said 40-50 schools have made contact with him since his name was entered into the portal.

Turner mentioned the coaches who have caught his attention.

“I would say Coach Chris Mack from Louisville. He’s been pretty hands on with the whole recruitment and FaceTiming me and things like that,” Turner said. “Coach (Eric) Musselman from Arkansas, you know, I think he’s been real, real just passionate about the recruitment. Watching film, breaking down my game, things like that.

(Georgia) Coach Tom Crean is also giving me different things I can still develop at and just overall just being real about the process. Coach (Cuonzo) Martin from Missouri, I think he’s been pretty unique about the whole recruiting process as well.”

The compliance director at Bowling Green indicated his name would be entered in the portal 2-3 days after Sunday. Unexpectedly, his name showed up in the portal the same day.

He was startled by the immediate attention from college coaches once his name appeared in the portal.

“I go to the bathroom and I have at least 25 missed communications,” he said. “I didn't think I was going to be in the portal that fast. I’m thinking everything is going to transition kind of smoothly, then I come back and I see all these missed calls and everyone adding me on Twitter. It was pretty crazy.”

Turner, a Detroit native, is planning to narrow his list by the end of this week.

“I’m really taking this week to really just collect all the information - as much as possible,” Turner said. “There’s a lot of different schools, a lot of high-profile schools that’s saying a lot of stuff, so you know, I want to be realistic about where I can see myself playing and where I can go and fit in.”

The day-to-day communication with coaches has been time consuming.

“It’s definitely taking up a lot of my day,” Turner said.

Turner broke down what he’s looking for in his next school.

“I want to go in somewhere I can make an impact and be myself,” Turner said. “Somewhere I'm comfortable going. Obviously my game is scoring, but also make the right play. I’m not selfish and things like that.”

He said Texas Tech, Marquette, Iowa State, Missouri, Georgia, Alabama and UConn have been the most aggressive in recruiting him.

Turner does not have a firm timeline on a decision.