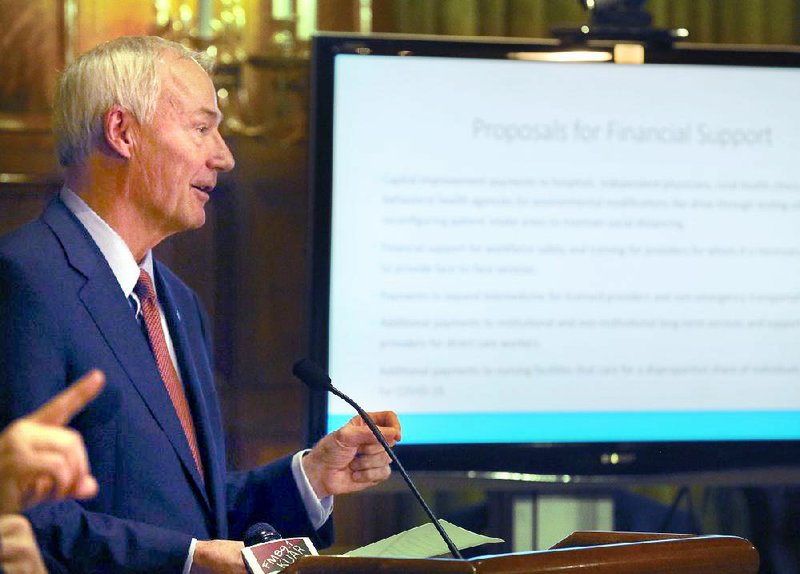 “Health care today cannot be delivered just like it was two weeks ago,” Gov. Asa Hutchinson said Thursday at the state Capitol as he discussed new funding proposals related to the coronavirus fight. More photos at arkansasonline.com/327covid/. (Arkansas Democrat-Gazette/Thomas Metthe)

The third death of an Arkansan from the coronavirus was reported Thursday as the number of people testing positive in the state rose by 41, to 349.

Meanwhile, Gov. Asa Hutchinson outlined a plan to spend $116 million in Medicaid funds to help doctors, hospitals, nursing homes and others respond to the growing number of Arkansans seeking care.

Among other initiatives, the plan includes $55 million that would be used to supplement the salaries of workers who care for the elderly and disabled in long-term-care facilities or provide home-based care. In addition, more than $31 million would go to small hospitals and clinics to be used for capital improvements, such as establishing drive-thru testing sites.

"Health care today cannot be delivered just like it was two weeks ago," Hutchinson said. "Hospitals, clinics, pharmacies, residential facilities have to re-engineer their practice patterns to protect the lives of their patients and their employees in new ways that are consistent with this public health emergency."

Arkansas Department of Health Secretary Nate Smith said the state's most recent death from the virus was of a Central Arkansas resident. He did not provide further details about the person.

Mark Palenske, pastor of Greers Ferry First Assembly of God, said the man was a retiree and one of dozens of members of the church who have been diagnosed with covid-19. Covid-19 is the disease caused by the coronavirus.

Palenske declined to name the man or provide his age, saying the decision to release those details would be up to the man's family.

In a Facebook post Wednesday, Palenske noted that the number of people connected to the church who have tested positive for covid-19 stood at 37. He said there have been no new cases; two members are awaiting test results.

[Video not showing up above? Click here to watch » https://www.youtube.com/watch?v=cgBW2wL67jU]

On Tuesday, church member Bill Barton, 91, of Cleburne County became the second person in the state to die of the virus.

A 59-year-old Sherwood man, whose name hasn't been released, died of the virus earlier Tuesday.

The cases reported Thursday by the state included the first instances for Chicot, Howard, Lonoke and Randolph counties, meaning the spread of the virus to 42 of the state's 75 counties.

Hempstead County had been listed as having one to four cases since Tuesday but was listed Thursday as having no cases.

The biggest increase -- from 40 cases to 46 -- was in Cleburne County, where Greers Ferry First Assembly of God is located.

The cases also increased by at least two in White County, to six; and by at least one in Lincoln County, to five. Both counties were listed Wednesday as having one to four cases.

No new cases were reported in Crittenden County, where seven people have tested positive.

All of the other counties where people have tested positive were listed as having fewer than five cases.

Smith said those who recently tested positive included a worker at Briarwood Nursing and Rehabilitation, a Little Rock nursing home where 37 residents and 10 staff members have tested positive since March 18.

A second resident at The Waters of White Hall nursing home, which had its first reported case Wednesday, also tested positive, he said.

No new cases were reported at Apple Creek Health and Rehab in Centerton, where one patient has a confirmed diagnosis, or The Villages of General Baptist West in Pine Bluff, where two residents have been diagnosed.

Smith said 41 of the people with the virus in Arkansas are hospitalized, including 13 who were on ventilators.

A day earlier, the department had reported 12 hospitalized patients, including four who were on ventilators.

He said the increase stemmed from a shift to require hospitals to report information on covid-19 patients through an electronic system.

"Initially, because we had very few, we were actually having one of our nurses call the hospitals, call the patients to ascertain their status as they got additional information on how they were doing," he said. "That worked when we had smaller numbers."

The total number of cases reported on a state website was updated Thursday evening.

A report, dated Wednesday, by the Arkansas Hospital Association estimated that 12,720 Arkansans will need hospital beds, including 2,760 in intensive care, at the peak of the pandemic in the state.

Even if hospitals decrease their occupancy rates by half to accommodate the expected influx of patients, the number of covid-19 patients needing hospital care will be more than double the number of available beds in most areas of the state, according to the study.

It estimated the number needing intensive care will be three to five times more than the number of such beds that are available.

Arkansas officials earlier estimated that 1,000 patients will need hospitalization at the peak of the pandemic.

University of Arkansas for Medical Sciences spokesman Leslie Taylor said the university is reviewing the study.

"I've spent a lot of time on modeling, as I know Dr. Smith and his team has, trying to figure out where we're going to go in the future," Hutchinson said Thursday. "The first thing you realize is there's a lot of different models that are out there.

"We're learning day by day more information. We're going to continue that effort, and when we have confidence on it we will act on it."

He said the 1,000-bed estimate assumes that the state will be effective in slowing the spread of the virus by reducing the opportunities for it to spread from person to person.

Following through on a measure that he announced Wednesday, Hutchinson on Thursday issued an executive order prohibiting indoor social gatherings of more than 10 people.

The restriction includes club meetings, concerts and other activities but does not apply to businesses, places of worship or governing bodies such as the Legislature.

Those entities, however, "are advised to limit person-to-person contact and maintain appropriate social distancing of at least six (6) feet to prevent the spread of the virus," Hutchinson said in the order.

(The Legislature began meeting Thursday to act on a bill that would allow the governor to make use of a surplus to partly make up for a budget cut in the current fiscal year, which ends June 30. Members have taken steps to put distance between themselves, including representatives sitting far apart from one another in the 5,600-seat Jack Stephens Center at the University of Arkansas at Little Rock.)

Violation of the governor's order on meetings is a misdemeanor punishable by up to a month in jail or a fine of up to $500.

Also on Thursday, the Health Department issued guidance recommending that travelers from a foreign country or from New York, which has the country's largest outbreak, quarantine themselves for 14 days.

"If we do all the right things and we take the right protective measures, then when we get to the peak, we're probably looking at 1,000 individuals hospitalized," Hutchinson said. "The key thing is that we do the right thing."

He added, "as it changes, if we see this increasing at a faster rate, we don't see the public doing what they need to be doing, we can adjust accordingly."

Hutchinson said the state planned to submit an application Thursday for a waiver from federal Medicaid rules allowing it to implement the emergency coronavirus plan.

The state would make bonus payments of $250 a week to full-time nurses, nurse's aides and other direct-care workers in long-term-care facilities, such as nursing homes, and to those who provide in-home services.

The bonuses would be $500 for workers in facilities with a diagnosed covid-19 patient.

According to the waiver application, the payments would last eight weeks, but the state could extend them in 30-day increments after giving notice to the federal Centers for Medicare and Medicaid Services.

The state also would make extra payments of $500 a month to foster parents to help them care for the children while schools and many child care centers are closed.

Clinics and hospitals with 65 beds or fewer and clinics would be able to apply for funds for projects such as establishing a drive-thru testing site, reconfiguring patient intake areas, enhancing cleaning and sanitation, and purchasing equipment for telemedicine.

Those providers could also apply for funding for training, to extend hours or make other changes to their practices.

The state would also spend $5 million to help cities move homeless people out of shelters and into buildings such as apartments or hotels where the risk of transmitting the virus would be lower, and to provide areas to quarantine possible covid-19 cases and isolate those who become infected.

The state would also spend $3 million to help pay for equipment and staffing at nursing homes that have clusters of residents with covid-19.

It would spend more than $1.4 million to cover coronavirus testing for the uninsured.

The state Department of Human Services said it will also apply for a separate waiver allowing it to reduce regulations for providers, including allowing rural hospitals to care for more patients.

Hutchinson said all but $25 million would come from the federal government.

The state's share would come from its Medicaid trust fund, which comes from a tax on soft drinks and other sources, Human Services Department spokesman Amy Webb said.

Independent practice physicians, for instance, "is a group whose world has changed a great deal," she said.

"Their normal practice is not coming in now right now because we have asked people to stay home unless they really need to go in," she said.

On another front, UAMS Chancellor Cam Patterson said the state had made "a number of very large purchases" of protective medical gear that is expected to arrive this weekend.

That purchase comes on top of an order of 2 million units of protective gear that Hutchinson announced earlier and a shipment of equipment, including 27,800 respirator masks, that the state received this week from the U.S. Department of Health and Human Services' Strategic National Stockpile.