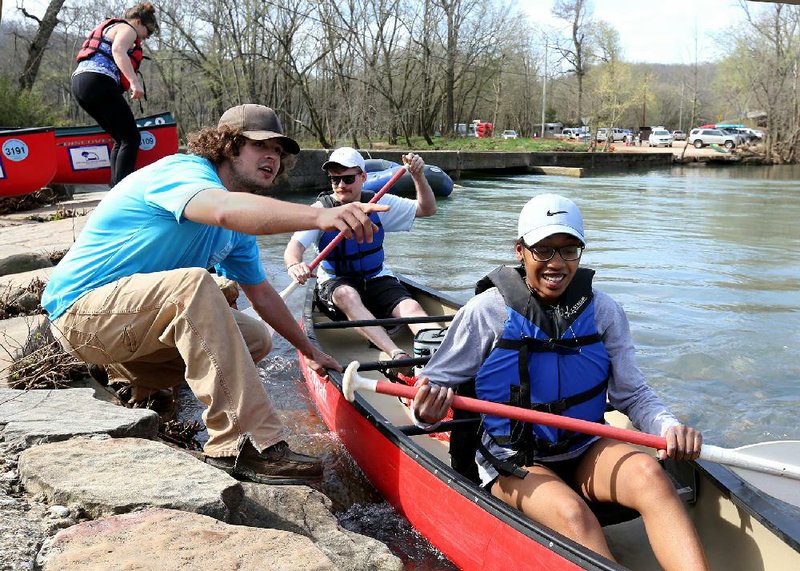 Nathan Spears with the Buffalo Outdoor Center gives some final instructions Thursday to Parker Henry (center) and Ajuania Woodley before they put-in on the Buffalo River at Ponca. (NWA Democrat-Gazette/David Gottschalk)

More than 50 vehicles were parked at the "put-in" near Ponca by noon.

Forecasts called for sunshine and temperatures in the 80s. Some doctors believe ultraviolet rays degrade the coronavirus, and many people were ready to take that medicine Thursday as they slathered on sunscreen and waited to get on the water.

It was the first really warm day in a week that was officially spring break for many schools, though it remains unclear whether in-person classes will reconvene for the remainder of the semester at schools across Arkansas.

Outfitters worked to stagger the number of people launching boats at the same time. They were trying to abide by state and federal guidance to keep from having crowds of 10 or more people as a way to blunt the spread of covid-19.

"We're trying to do the best we can," said Jon Trublood, river manager for the Buffalo Outdoor Center, an outfitter in Ponca. "But there's no way for us to control what the other outfitters are doing."

Trublood said there are five outfitters that rent canoes, although some of them primarily serve other sections of the river.

Established in 1972 as America's first national river, the Buffalo National River flows freely for 135 miles and is one of the few remaining undammed rivers in the lower 48 states, according to nps.gov/buff.

"Once you arrive, prepare to journey from running rapids to quiet pools while surrounded by massive bluffs as you cruise through the Ozark Mountains down to the White River," according to the website. 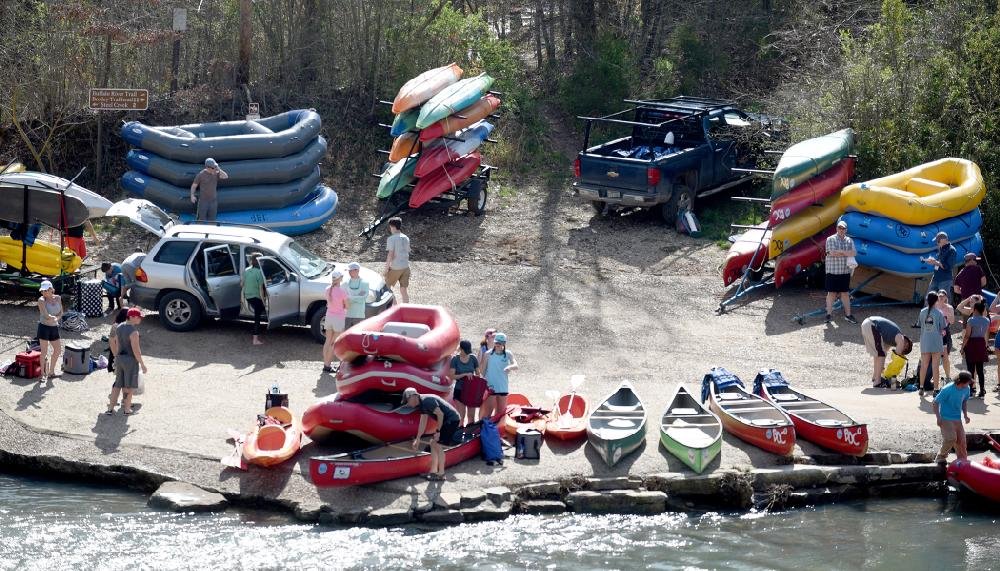 From the low water bridge in Ponca in Newton County, outfitters and private boaters prepare Thursday to set off on the Buffalo River. (NWA Democrat-Gazette/David Gottschalk)

While many businesses are closed because of the covid-19 pandemic, Americans have been encouraged to get outside and get some exercise.

But three of America's best-known national parks -- Yellowstone, Grand Teton and the Great Smoky Mountains -- have been closed to help prevent crowding and the spread of the coronavirus, according to the National Park Service.

While the crowds weren't that big at the Buffalo River, by midmorning Thursday, there were more than 10 people at the put-in area near Ponca. For the most part, people were standing 6 feet apart.

Jared Boyle of Rogers said his family hiked to Hawksbill Crag on Wednesday and decided to float the Buffalo on Thursday.

"It's hard to social distance on the trail," he said. "We tried, but the trail is pretty narrow in places."

Boyle said he could hear parents yelling "social distancing" at their kids on the trail.

"With this quarantine, we've been doing our part," Boyle said.

Mitchell Griffith, a manager at Puritan Coffee & Beer in Fayetteville, was ready to launch a canoe at Steel Creek on Thursday morning.

"I can only take sitting around home for so long before I have to do something outdoors," he said.

"It's good to get out of the house," said Lucas Simmons of Fayetteville, while his two boys, Jack, 7, and Leighton, 5, splashed in the river at the Steel Creek launch site.

Jack said he'd ridden his bike 100 times around the two blocks that make up his neighborhood.

It was time to do something else for a while.

On a beautiful Saturday during spring break, there could be as many as 500 boats on the Buffalo River, said Austin Albers, co-owner of the Buffalo Outdoor Center.

But there won't be that many this year, he said.

"We have closed canoeing to the general public, other than people who already had reservations or are staying with us, until the 19th of April at this point," Albers said.

He said Thursday was the first pretty day of the year, so lots of people wanted to go canoeing.

Buffalo Outdoor Center has 135 canoes and 10 rafts. On a very busy day, all could be rented out. But this week, Albers said he'd probably rent 70 canoes all week, and those are just to people who made reservations earlier.

Kris Jorgensen, co-owner of Lost Valley Canoe & Lodging in Ponca, said workers were still renting canoes as people arrived this week, but they were staggering the number of canoes launched at any one time. She said people would be instructed to sit in their vehicles and wait until their names are called.

"We will probably limit the amount of canoes that we do, but we'll take it day by day," she said.

Spring break looked to be an important week for Buffalo National River concessionaires.

"Up until now, it's either been too cold or the water's been too big," Jorgensen said.

Katie Stanbrough, a clerk at Lost Valley Canoe, said the business had rented 20 of its 60 canoes Thursday, along with 10 rafts and eight kayaks.

"For a Thursday, that's pretty good," she said. "We have had a lot of them go out just because it is a wonderful day."

"The river was literally flooded all last week, like in flood stage, 1,200 cfs or greater," he said, referring to cubic feet per second. "And when it's at flood stage, contractually, we're not able to launch. I'd rather not have to go and fetch people."

According to the U.S. Geological Survey, the water level at Ponca was 8 feet on March 19, but it had dropped back down to 4 feet by Tuesday.

Since then, the coronavirus seems to be affecting canoe rentals, Jefferson said.

"I expected it to be slow," he said Tuesday. "Hell, the whole world is scared."

"It's one of those deals where all we can do is follow our disinfectant plan and try to reduce any -- it's hard to say all exposure -- but trying to manage our exposure," he said. "We're spraying the boats with disinfectant, rotating the boats. Literally, a boat we use today won't go out again for four or five days. The virus can't live forever outside."

Jeff Broadnax, owner of Rio Buffalo Outfitters in Jasper, said he'd rented only a few canoes this week. Broadnax said April and May make up the traditional busy season for canoe rentals along the Buffalo National River.

"I really hope we have this thing under control by the time we have those really busy days, those sold-out days," he said. "I think we're all optimistic. We'll really know if we're in trouble in a few weeks."

Trails are still open in the national park. Albers and Jorgensen said the trails were crowded last weekend.

"It looked like a crazy busy Saturday," Jorgensen said.

Campsites for groups of 10 or more have been closed in the park, along with pavilions and programs aimed at educating and interpreting. Several visitors centers and the Buffalo National River Headquarters in Harrison are also closed.

"Visitors may continue to enjoy trails, the Buffalo River, individual campsites and the open space areas of the park," according to nps.gov/buff. "The health and safety of staff and visitors is our number one priority. We are working with the NPS Office of Public Health, and the U.S. Public Health Service to closely monitor the coronavirus (covid-19) situation.

"In the meantime, we continue to remind our visitors to follow the CDC's guidance to prevent the spread of infectious diseases, including maintaining social distancing, covering your mouth and nose when you cough or sneeze, and staying home if you feel sick."