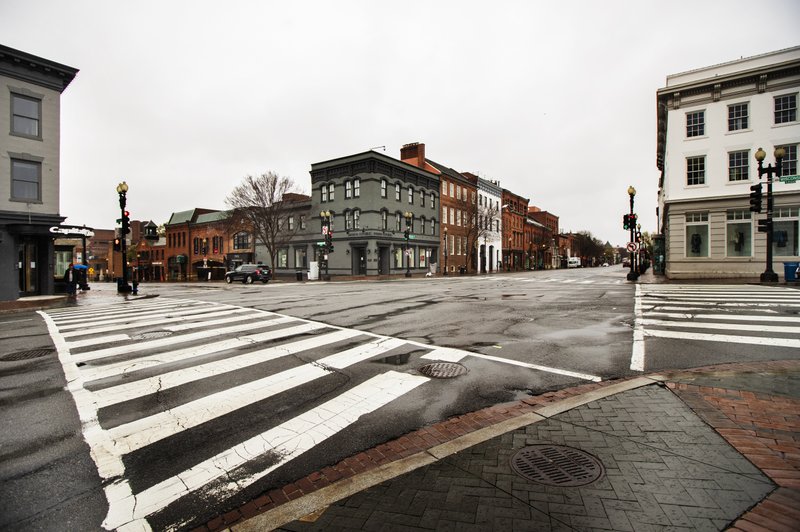 The streets in the shopping district of Georgetown are nearly empty Wednesday, March 25, 2020, in Washington. Streets are almost empty in usually crowded and busy shopping areas of the capital as Washington residents are urged to stay home to contain the spread of the coronavirus. (AP Photo/Manuel Balce Ceneta)

CHICAGO -- The orders seem prudent in the bid to thwart the spread of the coronavirus: Don't go out, don't gather with others and keep stores closed. But growing segments of the U.S. population say state and federal governments are trampling on freedoms central to American life in the name of protecting public health.

The case is already being made. A churchgoer in New Hampshire says prohibitions against large gatherings violate her religious rights. A Pennsylvania golf course owner argues that gubernatorial edicts shuttering his business amount to illegal seizure of his private property.

If civil libertarians aren't yet sounding alarms, many have their hands hovering over the button.

"So far, we haven't had draconian methods, like armed police blocking people's movement in the streets, surveillance and phone tapping," said Larry Gostin, a public-health lawyer at Georgetown University. "But we are seeing lockdowns of millions of citizens like we have never seen before."

He added, "We are on the precipice of something that could transform American values and freedoms."

Questions about the extent of governmental power to impose restrictions haven't been fully resolved since New York cook Mary Mallon, a typhoid carrier, defied health department orders to isolate. Mallon, better known as Typhoid Mary, lost her legal battle for freedom and ended up effectively imprisoned for 28 years on an island cottage, dying there in 1938.

Responses are no longer as severe. But thousands of Americans are already confined to their homes under threat of fines and even jail. Businesses are losing thousands of dollars. Workers are laid off.

One man infected with the coronavirus in Kentucky recently left a hospital and refused to quarantine; an armed county deputy was posted outside his home to ensure the 53-year-old stayed put.

[Video not showing up above? Click here to watch » https://www.youtube.com/watch?v=DpxkiFvjdac]

"It's a step I hoped I'd never have to take, but we can't allow one person who we know has the virus to refuse to protect their neighbors," Kentucky Gov. Andy Beshear told reporters.

Authority to order shutdowns and quarantines in states rests almost entirely with those states under provisions in the U.S. Constitution ceding power not explicitly delegated to the federal government.

The federal government itself can't order nationwide quarantines or business closures, courts have ruled over the years. It does, however, have clear power under constitutional clauses regulating commerce to quarantine international travelers or those traveling state to state who are suspected of carrying an infectious disease.

At least some legal scholars believe the Constitution's Commerce Clause may vest President Donald Trump with powers to impose a national lockdown, but he'd probably have to resort to persuading all 50 states to agree to uniform restrictions if he ever seriously contemplated such a move.

That doesn't appear to be his inclination. He said this week that he was hoping to lift restrictions in a bid to boost the plummeting U.S. economy as early as Easter Sunday, April 12, setting up a standoff with state officials who have said they can't risk it.

Laws spelling out what steps a state can take during a pandemic can be complex and difficult for judges to sort through. Some haven't been updated in decades, according to a report by the Congressional Research Service.

And they also differ state to state. The maximum penalty in most states if someone violates mandatory quarantines -- often backed by a court order -- is a year in jail. In Mississippi, it can be 10 years in some circumstances, according to the National Conference of State Legislatures.