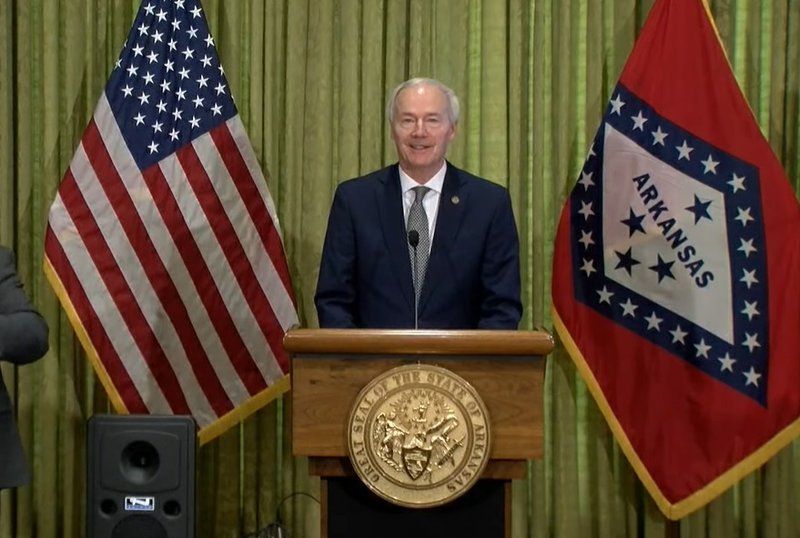 The number of known positive cases of coronavirus in Arkansas rose again by 2 Friday evening, bringing the total to 386, according to the state Health Department.

The number of known positive cases of coronavirus in Arkansas rose by 3 Friday afternoon, bringing the total to 384, according to the state Health Department.

Models for the spread of covid-19 in Arkansas estimate there could be 3,500 cases of the illness in the state in the next two weeks, Gov. Asa Hutchinson said Friday. The climb to that number would represent an almost ten-fold increase over the total Friday afternoon of 381.

“We at the same time want to do everything we can to beat that modeling,” Hutchinson said. “We also want to prepare for the worst-case scenario.”

In anticipation of the greater need for hospital beds, Hutchinson said he authorized 10 members of the National Guard to work with the Army Corps of Engineers to determine how to expand the state’s capacity.

The state is looking first at recently closed hospitals, Smith said, but the Army Corps of Engineers has also surveyed War Memorial Stadium as a possible site.

Hutchinson called on Arkansans to help “beat that curve” by continuing social distancing, not making unnecessary trips to public places and limiting the number of people in gatherings to 10 or less, as is now required by a Health Department directive.

The directive carries the power of law.

Smith said 48 patients are hospitalized, an increase of seven from Thursday afternoon. He said 17 are on ventilators, up 4 from Thursday.

No new cases are connected to nursing homes, Smith said. Four such facilities in the state already have at least one resident or staff who has tested positive for covid-19.

There were also no additional deaths reported Friday afternoon. The health department reported so far three have died of the illness, and 19 have recovered.

The daughter of the third person in Arkansas to die from covid-19 has identified her father publicly as Terry Henderson, 73.

Henderson died Wednesday evening at Baptist Health Medical Center in Little Rock, according to Rhonda Henderson Mullins of the Memphis, Tenn., area. His death is the second among the members of Greers Ferry Assembly of God Church in Greers Ferry, coming after the death Tuesday of Bill Barton, a 91-year-old member of the church who was a door greeter there.

In a Facebook post Thursday, Mullins said her father thought he had the flu and "that he would just fight through it" as he's done before, and refused to see a doctor until Mark Palenske, pastor of Greers Ferry Assembly of God, tested positive for the virus. Palenske's was the first among the tests of those in the congregation to return, the pastor noted earlier this week.

Mullins shared the information about her father because she wanted others to know the danger of the virus.

"I want his death to be a wake-up call for every one of my friends and family and everyone they know," she wrote. "Please don't let his death be in vain."

The number of known positive cases of coronavirus in Arkansas rose by 30 later Friday morning, bringing the total to 381, according to the state Health Department.

The number of known positive cases of coronavirus in Arkansas rose by two Friday morning, bringing the total to 351, according to the state Health Department.

The number of people who have died of the illness remained at three. The department reported 19 people have recovered.

Arkansas Gov. Asa Hutchinson and state health officials are expected to provide an update on coronavirus in the state during a 1:30 p.m. briefing.

Check back later for updates and live video of the briefing.

CORRECTION: An earlier version of this story had an incorrect number of virus cases in the headline. As of 10:07 a.m. Friday, the state was reporting 351 cases.