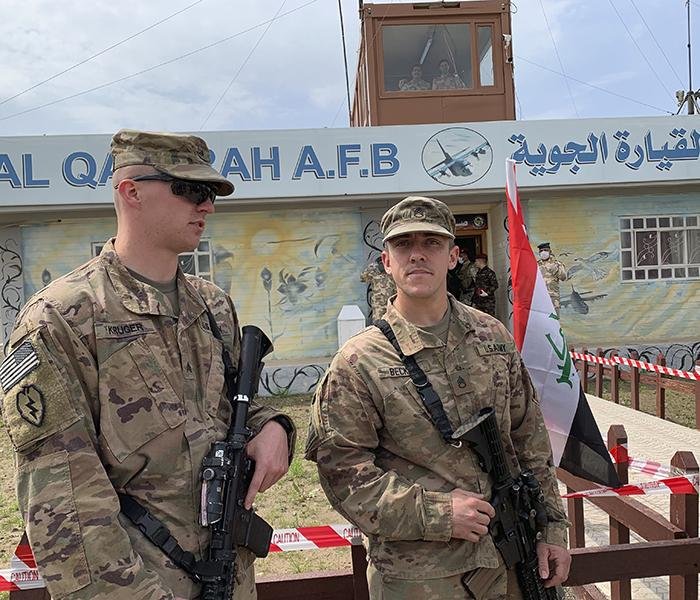 U.S. soldiers stand guard Friday during the hand-over ceremony of the Qayyarah airfi eld near Mosul, Iraq, to Iraqi security forces. The airfield was the second base that U.S.-led coalition troops have withdrawn from as part of a troop decrease in Iraq. (AP/Ali Abdul Hassan)

QAYARA AIR BASE, Iraq -- The U.S.-led coalition on Thursday started pulling out of a second base in Iraq, in line with a planned drawdown of troops, hours after two rockets hit inside Baghdad's heavily fortified Green Zone.

The attack in the Iraqi capital, the seat of government and home to the American Embassy, was the first after a brief lull in violence from earlier this month. Iraqi officials also said the U.S. renewed a sanctions waiver enabling Iraq to import crucial gas and electricity from Iran, but with a shorter deadline.

The pullout from the Qayara airfield in northern Iraq is in line with plans to withdraw from bases across Iraq and consolidate coalition forces in Baghdad and at Ain al-Asad Air Base in the country's western desert. The plan has been in the works since late last year, a senior coalition military official said last week, and accelerated when Iraqi forces proved they were capable of facing the threat from the Islamic State group with limited coalition assistance.

Coalition spokesman Myles Caggins said several hundred troops would depart the Qayara base in the coming days and that $1 million worth of property would be transferred to the Iraqi government at the hand-over ceremony. Last week, coalition troops withdrew from the al-Qaim base on the border with Syria.

"Our partnership continues with the Iraqi security forces, but in the future you will see less coalition troops in fewer places with fewer bases," said Caggins.

France said late Wednesday that it will pull out all of its military forces from Iraq, citing the need for French forces to help fight the new coronavirus at home. Caggins said, however, that only French trainers had gone home over coronavirus fears and that France continues to provide advisers and air support.

"We think in some time, maybe some weeks, the French trainers will come back," he said.

In the Green Zone attack, the two projectiles struck near the Baghdad Operations Command, which coordinates Iraq's police and military forces, the military statement said. The command center is a few hundred yards away from the U.S. Embassy, which is a regular target of rocket attacks.

There were no casualties, according to an Iraqi security official, who spoke on condition of anonymity in line with regulations.

No rockets had been fired at the Green Zone since last Tuesday, when three hit an area near the embassy. That was the fourth rocket attack in the span of a week targeting U.S. interests in Iraq, after assaults on the Basmaya training camp and two separate attacks on Camp Taji. Both bases are near the Iraqi capital.

The first attack on Camp Taji killed three coalition servicemen, two Americans and one Briton. That prompted U.S. airstrikes against what Washington said were mainly weapons facilities belonging to Kataib Hezbollah, the Iran-backed Iraqi militia believed to be responsible for the attack.

However, Iraq's military said those airstrikes killed five security force members and a civilian, while wounding five fighters from the Popular Mobilization Forces, an umbrella organization that includes an array of Iraqi militias and some Iran-backed groups.

Iran-backed Iraqi militias have vowed revenge for the attacks.

Thursday morning's attack took place as a state-imposed curfew to contain the spread of the new coronavirus was extended for a second time until April 11, according to an Iraqi Cabinet statement. The effective lockdown prohibits large public gatherings and has shuttered all businesses except essential ones like pharmacies and supermarkets.

An Iraqi army statement said it was enforcing the curfew by allocating army units to assist police forces on the street and to cordon off areas if a flare-up of virus cases occurs.

Meanwhile, three Iraqi officials said the U.S. will keep letting Iraq import gas and power from neighboring Iran without facing American sanctions. But the officials said Washington has reduced the deadline by which Iraq would need to prove it is making headway in becoming energy independent.

There was no immediate confirmation from U.S. officials.

The last waiver was granted Feb. 13 for a period of 45 days. Officials said they received word Thursday from U.S. officials that the next waiver would expire in 30 days. The U.S. has applied stringent sanctions on Iran that punish any country trading with it. The U.S. waiver enables Iraq to avoid penalties while paying Iran billions of dollars for energy imports.

Information for this article was contributed by Samya Kullab of The Associated Press.