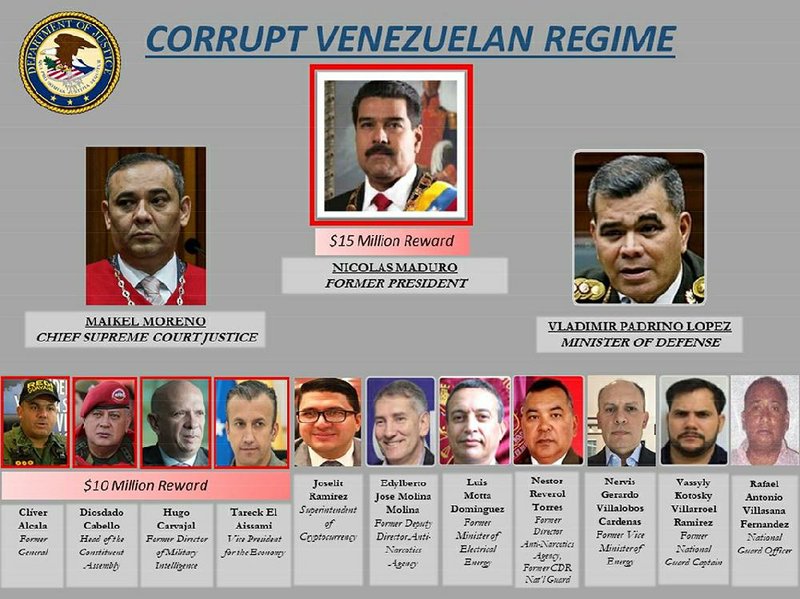 The Trump administration unsealed indictments against Venezuelan President Nicolas Maduro and members of his inner circle on narco-terrorism charges Thursday, an escalation in the U.S. campaign to force the authoritarian socialist from power.

The administration announced a $15 million reward for information leading to Maduro's capture or conviction, a bounty on a man still recognized by the Russians, Chinese and others as Venezuela's rightful leader. The move effectively turns the 57-year-old former union leader into an internationally wanted man.

Attorney General William Barr announced the indictments of Maduro and other current and former Venezuelan officials on charges including money laundering, drug trafficking and narco-terrorism. Barr and other U.S. officials alleged a detailed conspiracy headed by Maduro that worked with Colombian guerrillas to transform Venezuela into a transshipment point for moving large amounts of cocaine to the United States.

Barr accused Maduro of "deploying cocaine as a weapon" to undermine the United States.

[Video not showing up above? Click here to watch » https://www.youtube.com/watch?v=GA7IL9ZRZXY]

"Maduro and the other defendants expressly intended to flood the United States with cocaine in order to undermine the health and well-being of our nation," Barr said during a news conference in Washington.

The charges against Maduro, filed in indictments in New York and Florida, carry a mandatory minimum sentence of 50 years in prison and a maximum of life. The U.S. attorney in Manhattan, N.Y., Geoff Berman, seemed to concede that U.S. authorities could not arrest Maduro in Venezuela, but noted that the leader might travel outside his country.

The charges, described as "a decade" in the making, recalled the U.S. indictment of Panamanian strongman Manuel Noriega in 1988. In that case, President George H.W. Bush eventually ordered U.S. forces to invade and capture Noriega.

The Trump administration last year broke diplomatic relations with Maduro and recognized National Assembly leader Juan Guaido as Venezuela's legitimate president. Barr said officials expect to arrest Maduro, but he would not comment on whether the administration would entertain a military option, as it did in Panama.

"We're going to explore all options for getting custody," Barr said. "Hopefully, the Venezuelan people will see what's going on and will eventually regain control of their country."

Also charged were the head of Venezuela's National Constituent Assembly, a former director of military intelligence, a former high-ranking general, the minister of defense and the chief justice of the Supreme Court. Some of the indicted officials -- notably Defense Minister Vladimir Padrino Lopez and Chief Justice Maikel Moreno -- were involved in plotting a military uprising against Maduro last spring but failed to live up to secret pledges to move against the president.

The indictments are an escalation in tactics against Maduro that officials have gradually ramped up since President Donald Trump entered the White House. A campaign that started with targeted sanctions on individual Venezuelan officials broadened to measures that have locked the government out of the U.S. financial system. A U.S. oil embargo imposed last year has denied Caracas its single largest source of hard currency.

"There's a conspiracy from the United States and Colombia and they've given the order of filling Venezuela with violence," he said on Twitter. "As head of state I'm obliged to defend peace and stability for all the motherland, under any circumstances."

Maduro is scrambling to cope with an outbreak of the coronavirus as Venezuela's broken hospitals reel from chronic shortages of medicines, dilapidated equipment and unsanitary conditions. Barr suggested the pandemic had delayed Thursday's announcement, but he said the time was now right because Venezuela's "people are suffering."

"They need an effective government that cares about the people," Barr said. "We think that the best way to support the Venezuelan people during this period is to do all we can to rid the country of this corrupt cabal."

In a January interview with The Washington Post, Maduro scoffed at allegations that his government had established agreements with Colombian guerrillas engaged in narco-trafficking and kidnapping on the Venezuelan-Colombian border.

Prosecutors allege that Maduro and other Venezuelan officials have operated the Cartel do los Soles, or Cartel of the Suns, since at least 1999, corrupting Venezuela's government institutions so they could flood the U.S. with hundreds of tons of cocaine. They say the cartel worked with the Revolutionary Armed Forces of Colombia to move cocaine into the U.S., shipping it by air and sea through the Caribbean and Central America.

Barr said the Maduro government is "awash in corruption and criminality."

"While the Venezuelan people suffer, this cabal lines their pockets with drug money and the proceeds of their corruption," Barr said.

Information for this article was contributed by Ana Vanessa Herrero of The Washington Post.