Now's the time: There’s finally enough time to catch up on that to-do list 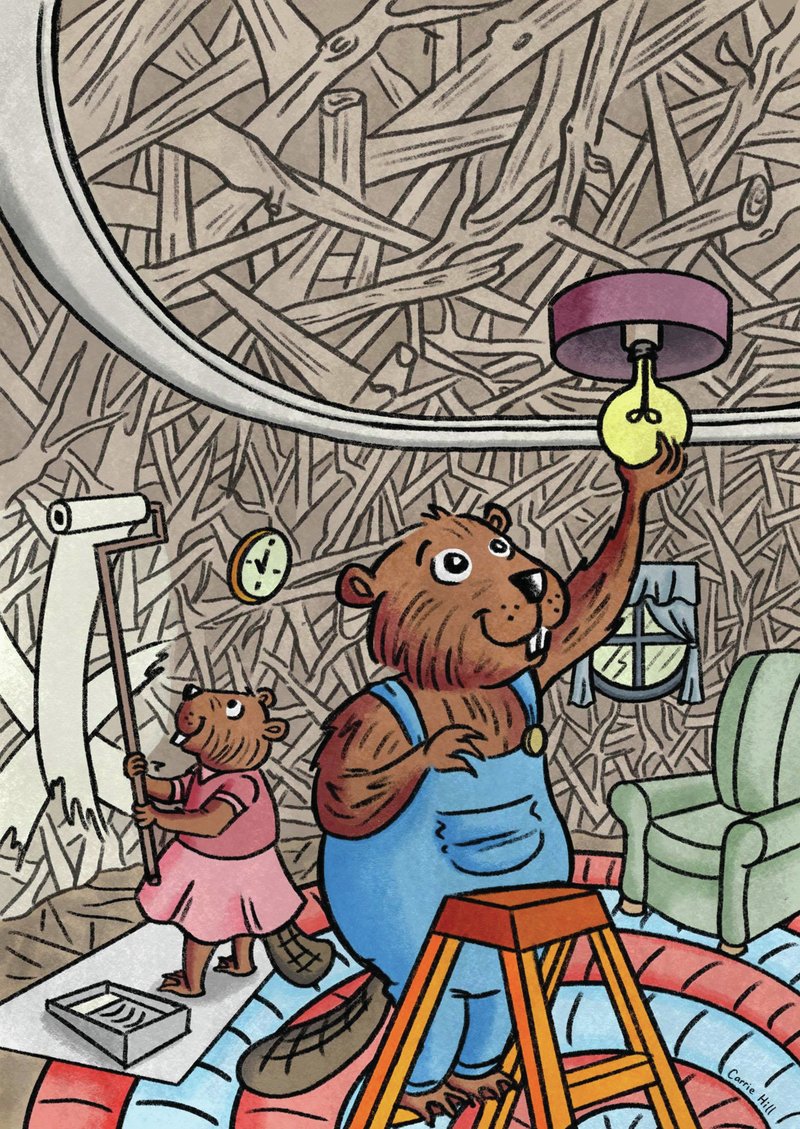 Many Arkansans are spending a lot of time at home, and because there is only so much Netflix one can watch, people are noticing things they need to repair, replace or rejuvenate.

Their eyes may wander from whatever show they happen to be bingeing to the space above the television and they might start to wonder what that taupe wall would look like in an aqua hue.

Or maybe they were cleaning — which differs, though not too much, from disinfecting — and that led to straightening the closet and before they know it they have completely revamped their clothing storage setup.

For some, there has been a perpetual list of things to do and this forced slowdown has given them an opportunity to catch up. That's the case for Nicholas Livers of Little Rock, who is taking this time out to catch up on little projects around his house.

"This weekend, we've had a lot more free time because usually, we're busy with kids' activities or other things, like going to church on Sunday morning," Livers says. "This weekend with everything being canceled, we've had more time just to be around here and get a lot of things done."

Livers rebuilt the kitchen cabinets in his family's home last year and while he was busy with that he pushed aside some smaller repairs.

"This was a good time to knock out a bunch of the small ones. We had a shower door that needed a roller replaced so I replaced that, and I've got the stuff to fix a curtain rod that had come out of the wall," he says.

Based on the line he stood in at Home Depot last weekend, he assumes lots of other people have similar plans.

"The line at Home Depot was comparable to the one I saw at the grocery store," Livers says. "I noticed people with cans of paint and I noticed a lot of people getting landscaping type flowers and mulch and that kind of stuff."

In Fayetteville, Delane Allen says it's business as usual in his store, The Hardware Store.

"We are seeing a lot of people coming in to buy seeds," he says. "They're buying just your typical vegetable seeds — cucumbers, tomatoes, peppers. I don't know if that means more people are going to grow their own food or if we're just noticing it more now."

Jeff Fuller, owner of Fuller & Sons Hardware, says the majority of sales in his company's six stores are, of course, cleaning and paper products, nitrile gloves and masks, but there has been a steady flow of customers looking for other items as well.

One customer he talked with was buying sandpaper to refinish some furniture.

"It's anything from that thing I've been putting off fixing for a while to that project I've been wanting to get to for a long time to I'm just looking for something ... to do so I thought this would be fun. It runs the gamut," Fuller says. "I was at a store yesterday and I heard someone say, 'I need a home project.'"

Fuller says the number of people — professional plumbers and electricians as well as amateur repair folks — coming in for supplies hasn't slowed, despite concerns about covid-19.

William Bona, owner of Kraftco, a hardware store near Little Rock's Heights neighborhood, also sees evidence people are catching up on to-do lists while they're stuck at home.

Some of his customers seem to have had bright ideas about how to spend their time.

"We have sold a plethora of light bulbs. I guess people are either replacing bulbs that are out or they are switching to LED light bulbs," he says.

"We deal with a lot of older clientele here, just by the nature of where we're located," Bona says. "A lot of those people are taking comfort in not getting out and being in contact with other people and we're trying to accommodate as best we can."

Lori Dawson of North Little Rock has been organizing and clearing out closets at her house, selling her children's outgrown clothing, including her daughter's dancewear, through Facebook.

"First of all we need to organize, and I've also just wanted to do something because you feel better when you do something to help others," Dawson says. "We were cleaning out closets because we are donating the money to different areas in the community."

Dawson, who has a health condition that makes social distancing crucial for her right now, needed to be quiet while her children did schoolwork online in the mornings after their school closed, and cleaning closets was an activity that fit the bill.

"We started a page on Facebook and put the clothes in boxes and people paid through PayPal or Venmo and picked them up from the front porch, so we were still not seeing anybody," she says. "It's just people we know locally."

"I haven't figured out how to get the paint here yet," she says.

She is in luck.

"If you tell me what you need, I can mix it and you can just pick it up," says Yari Renteria, sales associate at Sherwin Williams Paint Store in Little Rock.

Misty Borkowski used her time at home to sort through her three children's books and put them on a table on her front lawn, with a social media message: "Covid-19 Book Give Away located in Hillcrest neighborhood. Come as you are. Take all you want."

"Normally I would package them up and take them to my office but for now there is no one at the office to give them to," says Borkowski, a lawyer with Cross, Gunter, Witherspoon & Galchus.

Audra Jones of Little Rock organized her craft room, which required a trip to Michaels for an organizer. She ordered it online, called to let someone know when she arrived at the store and waited for them to bring it out to her.

She also sorted through her pantry and tossed everything past its expiration date — and that made her rethink her shopping habits. She resolved to be more conscious about using fresh fruits and vegetables before they go bad and not buying more than she needs.

"We spent some time outside doing some weeding and picking up some sticks that had fallen," she says.

Caroline Elliott, too, has been cleaning out her closet. Elliott, a student at Belmont University in Nashville, Tenn., completed a week of self-quarantine before social distancing was recommended in Arkansas.

Elliott's study abroad was canceled because of the spread of covid-19, and she returned to her family's home in Maumelle from Italy three months earlier than expected. She will complete her coursework online.

"When I got back, I had two big suitcases that I took to Italy so I had all my clothes out," she says. "I started kind of going through those and paring things down and I put a lot of them in stacks to donate and then I decided that I wanted to go through my closet .... Since I didn't take those to Italy, I was kind of like, 'well, maybe they are not clothes that I necessarily want to wear anymore.'"

She plans to donate some of those clothes and she will list others for sale through apps like Curtsy and Poshmark.

"I also have been reorganizing a lot of things here in the house. I really like going through things and paring things down," she says. "So I've been ... reorganizing, redecorating my room, putting some things in different spaces. I'm going through the cabinets because, you know, when you have to buy a lot of food because we may be here for a while, there's food that may go bad in your house. So we kind of started going through the freezers and refrigerators and our cabinets, just kind of stuff like that."

James Swaim, who moved back home to Little Rock from the University of Arkansas, Fayetteville recently when that campus moved classes online, has spent time rearranging the bedroom he shares with his brother, John, a high school senior. He's also clearing out a storage shed to make room for his belongings.

"I have stuff that I need to bring home from college, and I need a place to put it. The shed is my best option. But when I got here, there wasn't really enough space," James says. "So what we've been doing is just sort of emptying it out, going through everything and consolidating some stuff."

For the Swaims, looking at the shed's contents has offered a trip down memory lane. There were some baby clothes and toys that Swaim's mother, Anna, simply isn't ready to part with, school memorabilia, several Nerf guns and a bunch of old concert T-shirts Anna and her husband, Edward, collected over the years.

"My younger son is ready to wash all of those and start wearing them," Anna Swaim says. "It's this treasure trove of about 30 vintage concert T-shirts."