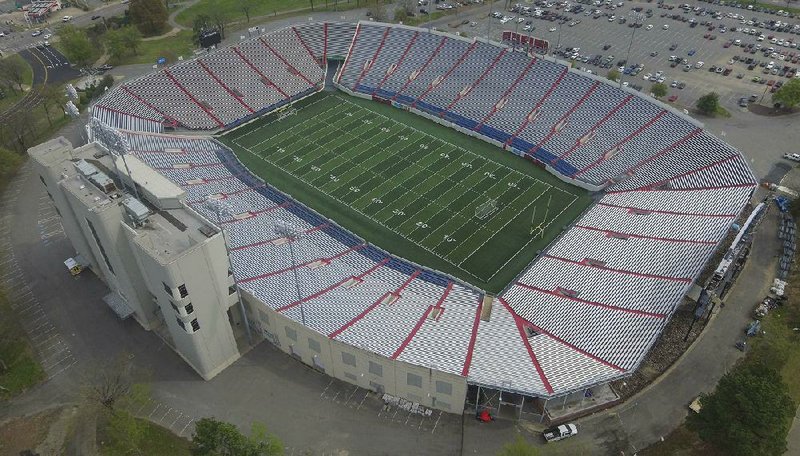 War Memorial Stadium in Little Rock, shown in an aerial photo Friday, is among sites under consideration for temporary tent hospitals to deal with an expected crush of coronavirus patients needing care in coming months. “I’m not saying that’s my first choice, but if we need it, that’s not a bad place to put a mobile hospital,” state Department of Health Secretary Nate Smith said Friday. (Arkansas Democrat-Gazette/Staton Breidenthal)

The state's first covid-19 diagnosis was March 11. On Friday evening, the state reported 386 cases, an increase of 37 from the day before.

The two-week projection by researchers at the University of Arkansas for Medical Sciences' College of Public Health was based on the current trajectory and didn't show when the cases will peak.

Hutchinson said the longer-term estimates "range wildly based on the information that is put into those models."

But he said the state is taking steps to prepare for what some studies indicate will be more than 10,000 patients needing hospital care at one time within a few months.

"It's too early to tell" what the peak demand for hospital space will be, the Republican governor said.

"We look at the data every day and make our best judgment as to where we're going in the future, but we have to plan further down the road, whether it's ventilators or hospital beds.

"We have to plan for that worst-case scenario because we're committed not to have our health care professionals have to make difficult choices.

[Video not showing up above? Click here to watch » https://www.youtube.com/watch?v=uV8tM6rLpZU]

"We want everyone to have that kind of access to a bed, to [an intensive-care unit] and to a ventilator as needed."

To prepare for the surge of patients, Hutchinson said Friday that he had ordered 500 ventilators, which he called a "massive expansion of our current capacity."

Health Department spokesman Danyelle McNeill said the state had 802 ventilators as of Friday afternoon, including 577 that weren't in use.

Health Department Secretary Nate Smith said it's hard to know how many the state will need. In some other areas, he said, 40%-50% of hospitalized patients have needed ventilators.

If that holds true for Arkansas, the state will need more.

As of Friday afternoon, 17 covid-19 patients were on ventilators, up from 13 a day earlier.

President Donald Trump issued an order Friday seeking to force General Motors Co. to produce ventilators, a move that Smith said "bodes well for us" depending on how soon the automaker can ramp up production.

The governor said he had authorized 10 members of the Arkansas National Guard to provide engineering and architectural support to the Health Department and the U.S. Army Corps of Engineers as they explore options for increasing the state's hospital capacity.

Corps spokesman Randall Townsend said sites ranging from War Memorial Stadium to hotels might be used as temporary hospitals or just an area for those who don't have a place to stay during the pandemic.

The Hot Springs Convention Center is one of the sites under consideration, Visit Hot Springs CEO Steve Arrison said.

He said the convention center, which has been closed to the public since March 17, was contacted by the National Guard about the possibility of setting up hospital beds there. Guard personnel plan to visit next week, he said.

"I think they're looking at various other facilities around the state," Arrison said. "So, if that's the case, we'll be ready to do whatever we have to do to get Hot Springs and Arkansas through this crisis."

Townsend said the Corps already has pre-planned designs for different sites and the teams will try to find the best buildings or facilities that can implement those designs. He said the state will make the final decision on which ones are used.


On Friday afternoon, 48 of the Arkansans diagnosed with covid-19 were hospitalized, or just over 12% of the total. That was up from 41 a day earlier.

Even if 700 -- 20% -- of the 3,500 people with the virus need hospital care in two weeks, the state's hospitals could easily accommodate them, Smith said.

"My concern is where are we going to be in four weeks, six weeks and eight weeks," he said.

A report by the Arkansas Hospital Association, using a model created by the Harvard School of Public Health and Harvard Global Health Institute, estimates that, under a "moderate" scenario, 12,720 Arkansans will need hospital care, including 2,760 in intensive care, at the peak of the pandemic in the state, which it projects happening in June.

On the other hand, a University of Washington study predicts a peak of 2,183 hospital patients, including 328 in intensive care, happening toward the end of April.

"If I was confident that the [University of Washington] model was absolutely the course that we were on, we really wouldn't need to do much of anything," to expand hospital capacity, Smith said.

But he said the state won't know which projection is more accurate until late April or early May.

In the meantime, he said he hopes to build the state's hospital capacity by about 2,000 beds over the next four or five weeks.

"That would get us halfway to [the needed space for] our worst-case scenario and still leave us time to try to make it the rest of the way," he said.

Among the options officials are considering is increasing staff in hospitals with unused space, reopening shuttered hospitals, converting buildings into hospitals and setting up temporary tent hospitals in places such as War Memorial Stadium.

"I'm not saying that's my first choice, but if we need it, that's not a bad place to put a mobile hospital," Smith said.

Using existing hospital space would be preferable, but ultimately the choice will be "probably whatever we can do quickest," he said.

Hospitals in rural areas, in particular, tend to have lower occupancy and more room to take in patients.

The state had 340 available intensive-care beds, far fewer than the 2,760 that the hospital association study predicts the state will need.

But Smith said, "It's not that hard to upgrade an acute-care bed to an ICU bed, or at least a ventilated bed."

A week ago, Hutchinson predicted the pandemic would reach its peak in the state in early May, requiring 1,000 Arkansans to be hospitalized.

The governor said Friday that could still happen if the state's efforts to limit the spread of the virus are successful.

He said he spoke with law enforcement officials from across the state on Friday to ask for their help in enforcing his executive order prohibiting social gatherings of more than 10 people.

Violation of the governor's order on meetings is a misdemeanor punishable by up to a month in jail or a fine of up to $500.

"Hopefully we won't have to use the enforcement component," he said. "Being necessary, we will."

Other measures by the state have included closing public schools through at least April 17, and closing bars, restaurants dining rooms, fitness clubs and hair salons, among other businesses.

Hutchinson also has recommended that businesses have employees work from home to the extent possible; screen employees and visitors for symptoms; and "enforce social distancing," a concept that health officials have said includes staying at least 6 feet away from other people.

"Every person in Arkansas needs to have the same level of concern," he said.

So far, three Arkansans have died from the virus. No new deaths were announced Friday.

Rhonda Henderson Mullins of the Memphis area said in a Facebook post Thursday that her father's death should be a "wake-up call."

His death was the second among the members of Greers Ferry Assembly of God Church, coming after the death Tuesday of Bill Barton, a 91-year-old member of the church who was a door greeter there.

In the Facebook post, Mullins said her father thought he had the flu and "that he would just fight through it" as he's done before, and refused to see a doctor until his pastor tested positive for the virus.

Mullins posted the information about her father because she wanted others to know the danger of the virus.

"Please don't let his death be in vain," she wrote.

The Pulaski County coroner's office identified the first person in the state who died from the virus as Brian Dill Sr., 59, of Sherwood.

As of Friday evening, the virus had spread to 43 of the state's 75 counties, including the first case ever reported in Baxter County.

All other counties with cases were listed as having fewer than five cases.

Smith said those who had tested positive as of Friday afternoon included 15 children or teenagers age 18 or younger; 124 people age 65 or older; and 242 people 19-64. The total number of positives was later updated Friday, but no breakdown was given.

Twenty-three Arkansans who tested positive were listed as having recovered, meaning that at least a week has passed since they fell ill and that they haven't had symptoms for at least three days.

Information for this story was contributed by Emily Walkenhorst, Francisca Jones, Eric Besson and Stephen Simpson of the Arkansas Democrat-Gazette; by Cassidy Kendall of The Sentinel-Record; and by The Associated Press. 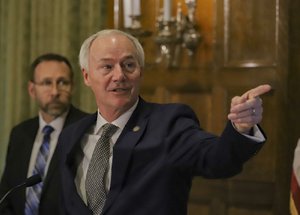