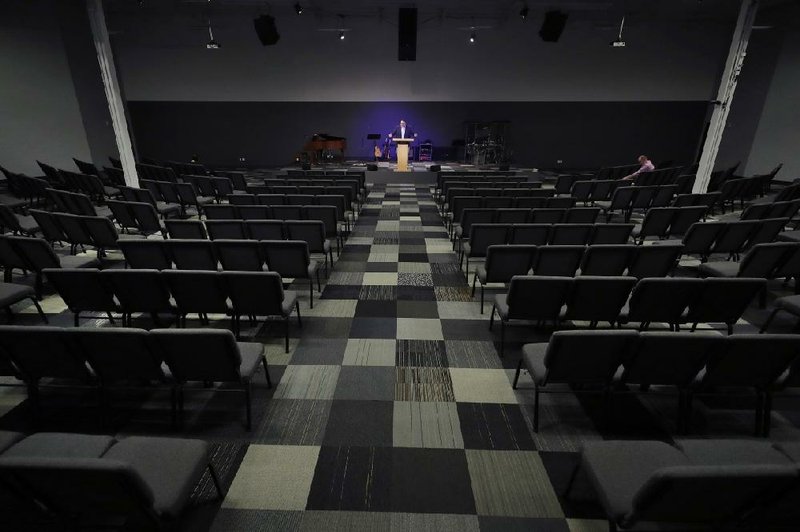 Josh Kellso, a pastor at Grace Bible Church, delivers a sermon via livestream for virtual attenders from an empty sanctuary in Tempe, Ariz., on Sunday. Many houses of worship have suspended all in-person services and programs and moved to online services in compliance with CDC guidelines to promote social distancing in the effort to slow the spread of the covid-19 coronavirus. (AP/Matt York)

NEW YORK -- As multiple governors issue orders to curb large gatherings and implore residents to stay home in a bid to slow the spread of the coronavirus, at least a half-dozen states have exempted some level of religious activity.

The divergent treatment of faith in some states' pandemic-fighting orders comes as a few houses of worship across the nation continue to greet people in person, despite federal public health guidance to avoid gatherings larger than 10 people and decisions by most religious leaders to shift services online. While the pandemic has heightened political tensions, the states including religious exceptions in their orders designed to combat the pandemic are led by governors in both parties.

In Michigan, for instance, Democratic Gov. Gretchen Whitmer announced a stay-at-home order Monday that banned all gatherings outside of individual households. Guidance on the order noted that "a place of religious worship, when used for religious worship, is not subject to penalty" for violating it, a standard that the state had applied to its previous order curbing gatherings.

Gov. Asa Hutchinson of Arkansas amended an executive order that went into effect Friday banning indoor groups of more than 10 people, and houses of worship were among the few exemptions. As of Friday he has not issued a stay-at-home order.

In Tennessee, where Republican Gov. Bill Lee issued a Sunday order limiting gatherings to 10 people, the Rev. Greg Locke said he plans to keep having service at Global Vision Bible Church in Mt. Juliet. Locke said that he plans to be in touch with attorneys about remaining open and that he is providing essential services to locals still recovering from tornadoes that slammed the state earlier this month.

"I don't think a church staying open in days of chaos, when people need hope -- I don't think that should be controversial," said Locke, describing himself as "shocked" by the degree of public pushback he received for continuing to hold services.

Religious gatherings were exempt from Ohio's stay-at-home order, issued Sunday by Republican Gov. Mike DeWine. Solid Rock, an Ohio megachurch whose Cincinnati location hosted an event for evangelical supporters of President Donald Trump last month, held an in-person service on Sunday and said on its website that it would exert a constitutional right to continue meeting.

"We do believe that it is important for our doors to remain open for whomever to come to worship and pray during this time of great challenge in our country," the church stated, noting that it wants to "help keep people safe."

DeWine posted a Sunday warning on his Twitter account, asking "religious leaders to think about their congregations" as they weigh state guidelines crafted for public health reasons.

"We did not order religious organizations to close, but my message to EVERYONE is that this is serious. When you are coming together, whether in a church or wherever -- this is dangerous," DeWine tweeted.

Another pastor who took heat for holding in-person service on Sunday, Tom Walters of Pennsylvania's Word of Life Church, posted an apology on the church's Facebook page and said he would move to online-only worship amid the virus.

"Please believe me when I say that it was not out of arrogance or defiance" that the church met, Walters wrote, "but solely for the purpose of praying for our churches, communities, and nation."

Other states declining to force closures of places of worship include Pennsylvania, where the list of essential businesses permitted to keep operating includes "religious organizations," and New York, where all nonessential businesses across the state were ordered closed as of Sunday night. Guidance accompanying that order said that "houses of worship are not ordered closed," but "it is strongly recommended no congregate services be held and social distance maintained."

Tony Suarez, executive vice president of the National Hispanic Christian Leadership Conference and a member of President Donald Trump's evangelical advisory board during the 2016 campaign, tweeted on Tuesday that he was "thankful" to see the number of states "listing churches as 'essential services.'"

States that did not exempt religious activity in their pandemic-related shutdown orders include Oregon, whose Democratic governor moved to prohibit nonessential gatherings on Monday, and Maryland, whose Republican governor's list of activities limited to 10 people on Monday included the "spiritual (and) religious."

California's stay-at-home order, by contrast, classified "faith based services that are provided through streaming or other technology" as an essential function.

Frederick Gedicks, a Brigham Young University professor who specializes in religion and the law, said arguments exist for accepting and rejecting exemptions for worship.

On the one hand, Gedicks said, religion could be considered "especially important during a national emergency" -- but from another perspective, "it's not singling out or targeting religion" to constrain worship at a time when most secular activity is also getting reined in.

Gedicks added that states' divergent approaches during the current pandemic are no more problematic than they've been on other issues: "What we're discovering now is the limitations of federalism in a time of national crisis."

Columbia University law professor Katherine Franke said that since "the overwhelming majority of at least Christian congregations are meeting online," state officials may have issued the exemptions in the hopes the effect would be minimal, assuming "most people will do the right thing."

Indeed, many faith leaders have gone to creative lengths to continue delivering spiritual support during the pandemic. In states such as Utah, where a mass gathering to welcome back returning missionaries of the Church of Jesus Christ of Latter-day Saints sparked criticism from the state's Republican leaders, Catholic priests have offered to hear drive-up confessions that heed social distancing rules crafted to stop the virus.

Gov. Asa Hutchinson had not -- as of Wednesday -- addressed church gatherings specifically, nor had he issued a stay-at-home order.

A handful of other houses of worship, though, continued to meet. One Louisiana pastor reportedly welcomed hundreds to his church Sunday, flouting public health restrictions for the second straight week and earning a rebuke from Democratic Gov. John Bel Edwards.

Edwards exempted travel "to and from an individual's place of worship" in his state's most recent stay-at-home order, which restricts gatherings larger than 10 people.

Next-door in Mississippi, Republican Gov. Tate Reeves has not ordered business closures or limits on social behavior. During a Sunday prayer session he led on Facebook, Reeves asked that residents have "the wisdom to do what's right, not only for themselves but what's right for all of their fellow Mississippians."

For most people, the virus causes only mild or moderate symptoms, such as fever and cough. For some, especially older adults and people with existing health problems, it can cause more severe illness, including pneumonia. The vast majority of people recover.

Information for this article was provided by Emily Wagster Pettus of The Associated Press.