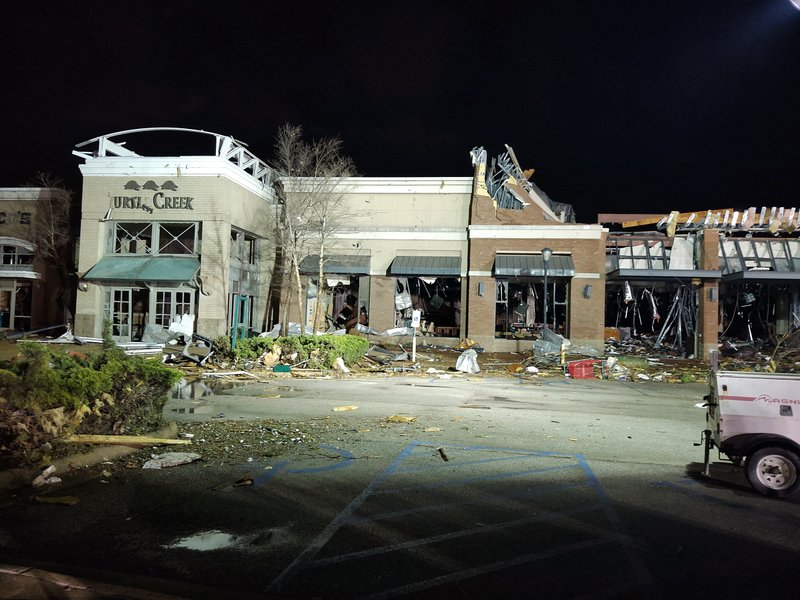 Damage to the front of the Mall at Turtle Creek in Jonesboro is visible on Saturday night after a tornado struck the city. At right is a Barnes and Noble bookstore. ( Joseph Flaherty)

A tornado has caused significant damage and multiple injuries in Jonesboro, officials said.

Jeff Presley, director of the city’s E-911 center, said the tornado did major damage to the Mall at Turtle Creek and Jonesboro Municipal Airport. He said three people had been reported injured and hospitalized as of Saturday afternoon.

“Police are doing search and rescue on vehicles right now,” Presley said. “We have red lights out all over town as well.”

Presley said the emergency response facility also received reports of multiple gas leaks in subdivisions within the city and that a train had been blown off the tracks at Airport Road.

Gov. Asa Hutchinson posted Saturday afternoon on social media that he was paying close attention to the tornado report.

“I know there is property damage,” he said. “Just praying all is safe.”

Video from an Arkansas Department of Transportation camera showed the tornado on the ground in Jonesboro.

Marvin Day, the county judge of Craighead County, has verbally declared a disaster, according to Melody Daniel, spokeswoman for the Arkansas Office of Emergency Management. That declaration allows the county to ask for resources from the state.

Jonesboro Police Chief Rick Elliott said Industrial Park in the city’s northeast, specifically Busch Agricultural Resources, had also been significantly damaged by the tornado. He said a search and rescue was still ongoing.

“I got officers from 10 counties coming in and we have called up or reserve units as well,” he said. “We are shutting down traffic because we don’t want people out right now.”

Mayor Harold Perrin implemented a 7 p.m. curfew for Saturday night, city spokesman Bill Campbell said. The measure will be in an effect as long as it’s needed.

“We got too many people gawking around outside,” Campbell said. “If you want to help us, stay at home.”

Campbell said Saturday that the National Guard was on its way to Jonesboro, and multiple law enforcements officials from across northeast Arkansas were providing assistance. Churches were also setting up shelters as of Saturday night.

“We got a lot to secure,” Campbell said. “This is a search-and-rescue mission being conducted across the city, and we are racing against the dark.”

The last tornado that did damage like this to the city happened in the early 1970s, when it hit a school in Jonesboro, Campbell said.

Arkansas State University announced on social media that no damage was done to the campus.

A suspected tornado tied to the same storm system was reported earlier Saturday in Jackson County. The weather service said law enforcement reported “several power lines down and a few roofs missing off of homes between Algoa and Amagon.”

This story is developing and will be updated. This story was originally published at 5:36 p.m.