He orders firm: Make ventilators by Compiled by Democrat-Gazette staff from wire reports | March 28, 2020 at 8:55 a.m. 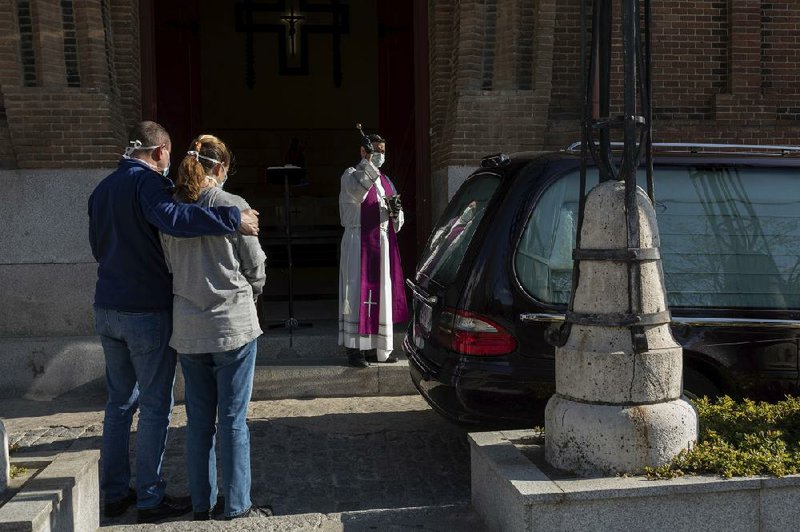 Mourners keep their distance Friday as a priest performs funeral rites at a cemetery in Madrid. The number of deaths from the coronavirus has climbed past 4,900 in Spain, second only to Italy. More photos at arkansasonline.com/328outbreak/. (AP/Bernat Armangue)

President Donald Trump on Friday used his authority under the Defense Production Act to compel General Motors to make ventilators as the nation battles the coronavirus.

Trump announced that he'd signed a presidential memorandum requiring the company to "accept, perform and prioritize" federal government contracts for production of the much-needed medical equipment shortly before he signed into law a $2 trillion stimulus package to help prop up the economy during the public health crisis.

Also on Friday, the United States became the first country to surpass 100,000 infections, according to a count kept by Johns Hopkins University. The U.S. topped 101,000 infections with more than 1,500 deaths.

"Our negotiations with GM regarding its ability to supply ventilators have been productive, but our fight against the virus is too urgent to allow the give-and-take of the contracting process to continue to run its normal course," Trump said in a statement. "GM was wasting time. Today's action will help ensure the quick production of ventilators that will save American lives."

Trump had hinted earlier in the day via tweets that he might take the action, writing what seemed like an order that GM start making the ventilators, but he did not then explicitly state that he was invoking the Korean War-era law.

"As usual with 'this' General Motors, things just never seem to work out," Trump tweeted. "They said they were going to give us 40,000 much needed Ventilators, 'very quickly'. Now they are saying it will only be 6000, in late April, and they want top dollar."

"Always a mess with Mary B.," he added, referring to Mary T. Barra, the company's chief executive.

"General Motors MUST immediately open their stupidly abandoned Lordstown plant in Ohio, or some other plant, and START MAKING VENTILATORS, NOW!!!!!!" he wrote. "FORD, GET GOING ON VENTILATORS, FAST!!!!!!

Trump also hinted at forthcoming announcements about arrangements with other companies.

"We have just purchased many Ventilators from some wonderful companies," Trump said in another tweet Friday. "Names and numbers will be announced later today!"

Trump has faced criticism from New York Gov. Andrew M. Cuomo among others for not doing more to facilitate the availability of ventilators to areas hit hard by the virus. Just Thursday night, Trump cast doubt on whether Cuomo's assertion that his state, which has become the epicenter for the coronavirus outbreak in the United States, will need 30,000 ventilators.

In a subsequent tweet, Trump claimed that ventilators sent to New York had been found in storage.

"When the president says the state of New York doesn't need 30,000 ventilators, with all due respect to him, he's not looking at the facts of this astronomical growth of this crisis," New York City Mayor Bill de Blasio, a Democrat, said on ABC's Good Morning America.

Bracing for the worst, Cuomo on Friday sought to add 4,000 temporary hospital beds across New York City and ordered schools closed statewide for two more weeks, which leaves them closed at least until April 15.

New York City schools are closed through April 20, though officials say the city closure could last the rest of the school year.

A new temporary hospital at the Javits Center is part of the state's plan to quickly get hospital capacity up from 53,000 beds to 140,000 beds.

"You are living a moment in history. This is going to be one the moments they write about and talk about for generations," he told Guard members. "So I say, my friends, that we go out there today and we kick coronavirus's a**."

There are already more than 6,000 hospitalized covid-19 patients in New York, with almost 1,600 in intensive care. The state has logged a national high of more than 500 deaths, and has more than 44,800 confirmed cases.

Dr. John Brooks of the U.S. Centers for Disease Control and Prevention warned Friday that Americans remained "in the acceleration phase" of the pandemic and that all corners of the country are at risk.

"There is no geographic part of the United States that is spared from this," he said.

Trump, who has repeatedly referred to the outbreak as a "Chinese virus," struck a different tone Friday, tweeting after the call that "China has been through much & has developed a strong understanding of the Virus. We are working closely together. Much respect!"

"We are not through this. We're not even halfway through this," said Joseph Kanter of the Louisiana Department of Health, which has recorded more than 2,700 cases, more than five times what it had a week ago.

During a virtual news conference with the governor Friday, Missouri National Guard Adjutant General Levon Cumpton said the Guard is "here to help you, not to control you." He said missions might include setting up community-based testing centers and transporting medical equipment.

"I want to be perfectly clear: This is not about putting Missouri under martial law," Parson said.

The number of confirmed cases there increased Friday to 670, up 168 from Thursday, according to state health officials. They also reported nine deaths Friday before Springfield-Greene County health officials announced a fourth person had died at an assisted-living home in Springfield.

Rhode Island has just over 200 cases, and it has begun an aggressive campaign to keep the virus out and New Yorkers contained, over objections from civil liberties advocates.

Raimondo, a Democrat, said she had consulted lawyers and said while she couldn't close the border, she felt confident that she could enforce a quarantine.

National Guard members will be stationed at the T.F. Green airport, Amtrak train stations and at bus stops. The citizen-soldiers will be following up with people at local residences. The maximum penalty for not complying is a fine of $500 and 90 days in prison.

The local chapter of the American Civil Liberties Union blasted the new rules, objecting to the collection of motorists' contact information, in particular.

"While the Governor may have the power to suspend some state laws and regulations to address this medical emergency, she cannot suspend the Constitution," Rhode Island ACLU executive director Steven Brown said in a statement.

"Under the Fourth Amendment, having a New York state license plate simply does not, and cannot, constitute 'probable cause' to allow police to stop a car and interrogate the driver, no matter how laudable the goal of the stop may be."

Worldwide, more than 593,000 people have contracted the virus and roughly 27,000 have died. While the U.S. now leads the world in infections, five countries exceed its more than 1,500 deaths: Italy, Spain, China, Iran and France.

In Europe, Italy recorded its single biggest 24-hour rise in deaths, with 969 more victims, to bring its total number of fatalities to more than 9,000. The country now has more than 86,000 cases, surpassing China to record the second-most infections in the world, behind the U.S.

Spain, with the world's fourth-biggest number of cases, reported another 7,800 infections for a total of more than 64,000.

The country said health workers accounted for about 15% of its cases.

Deaths in Spain climbed past 4,900 -- the world's second-highest total after Italy.

In Britain, Prime Minister Boris Johnson, 55, tested positive for the coronavirus, the first leader of a major nation to contract covid-19, but he insisted Friday that he remains in charge of the U.K.'s response to the outbreak.

Johnson's office said the prime minister was tested after showing mild symptoms for the coronavirus. He was self-isolating, it said.

Johns Hopkins University reported Friday that more than 130,000 people have recovered from covid-19, about half of them in China.

For most people, the virus causes mild or moderate symptoms, such as fever and cough that clear up in two to three weeks. But the virus can lead to pneumonia and death for some people, especially older adults and those with existing health problems.

Information for this article was contributed by John Wagner of The Washington Post; by Karen Matthews, Michael Hill, Marina Villeneuve, Matt Sedensky, Kevin McGill, David Rising, Jim Salter and Heather Hollingsworth of The Associated Press; and by Prashant Gopal and Brian K. Sullivan of Bloomberg News. 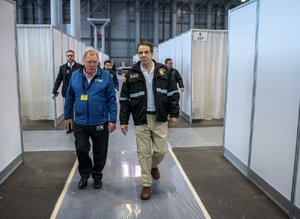 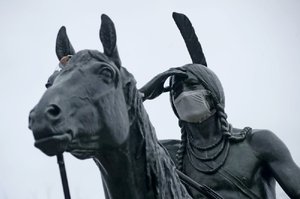 A protective mask adorns a statue of a Sioux scout as it stands on a bluff overlooking Kansas City, Mo., on Thursday. Missouri Gov. Mike Parson mobilized the state’s National Guard to help with the virus fight. Levon Cumpton, Missouri Guard adjutant general, stressed to the public that the move didn’t mean martial law, saying the Guard “is here to help you, not to control you.” (AP/Charlie Riedel)