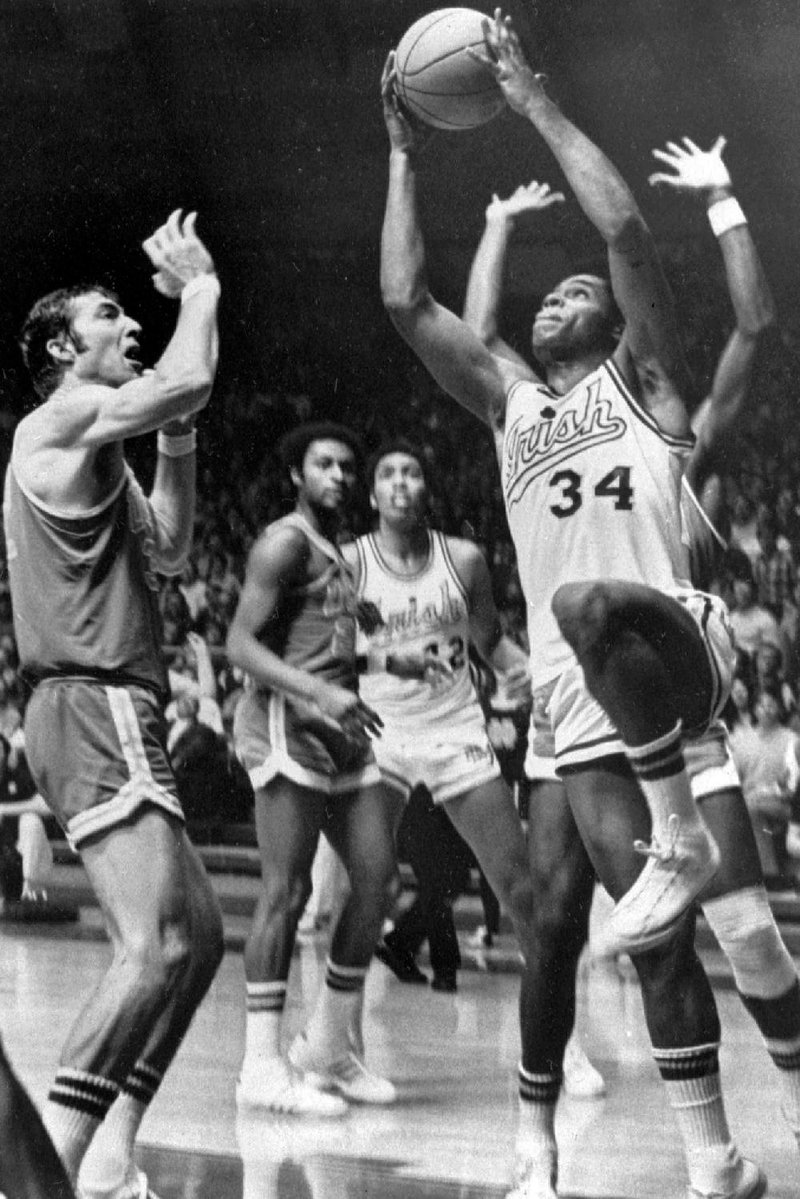 Notre Dame’s Austin Carr (34), here playing against ucLa in 1971, set himself apart in an era when proli c scorers dominated college basketball. he scored a still-standing ncaa Tournament record of 61 points against Ohio the year before. (aP le photo)

LSU's Pete Maravich was scoring 40 a night and still No. 1 on the points list. Niagara's Calvin Murphy, Purdue's Rick Mount and St. Bonaventure's Bob Lanier, along with Carr, were others putting up eye-popping numbers.

It wasn't until Carr scored a still-standing NCAA Tournament-record 61 points against Ohio in the first round in 1970 that, in his mind, he started to separate himself.

"At the time it gave me a different status in the basketball world," he told The Associated Press last week. "It gave me an opportunity to be put on the radar, to be in the top three or four players in the draft. A whole lot of things happened because of that."

Carr averaged 34.6 points over 74 college games, a figure that still ranks No. 2 behind Maravich's 44.4. In the 1971 NBA draft, Carr was taken No. 1 overall by the Cleveland Cavaliers.

Carr played nine of his 11 pro seasons with the Cavs and averaged better than 15 points a game, a figure that would have been higher had it not been for injuries. Now 72, he's the team's television analyst and director of community and business development.

Carr said he didn't expect his single-game tournament scoring record to last so long. At the same time, he laments the magnitude of the accomplishment has faded over 50 years, perhaps because he never made it past a regional semifinal when he played for the Irish.

"It's there but it doesn't really ring a lot of bells until this time of year because people don't talk about it," Carr said. "Recently, I'm starting to hear more about it as a record that might not be broken. So that's starting to travel around. But the one thing about this generation, we don't really worry too much about the past. They're more about the future. I've just resigned myself to that."

Notre Dame, like most teams back then, relied heavily on one or two players to carry the scoring load. Carr was comfortable shooting from anywhere on the floor, and point guard Jack Meehan was adept at feeding him the ball.

Film of the game against Ohio showed nine of his baskets came from behind what would have been today's three-point arc, meaning he would have scored 70 in this era.

The game in Dayton, Ohio, didn't begin well for Carr. Ohio's John Canine, the man he was assigned to guard, made his first six shots. Assistant coach Gene Sullivan approached Carr on the bench and said, "Are you going to play defense tonight or let this guy kill you?"

That moment changed the game. Canine cooled off and Carr went on a tear. The junior shooting guard was 25 of 44 from the floor and 11 of 14 from the line, and the Irish won 112-82.

"It helped put a football school on the basketball map, and that's what I really enjoyed about that whole time at Notre Dame," Carr said. "To give it some type of a basketball reputation, I was really proud of that."

Manning orchestrated one of the biggest championship game upsets with his 31 points, 18 rebounds and 5 steals in an 83-79 win over Oklahoma.

This was not a vintage Jayhawks team. It was a No. 6 seed and, with the exception of Manning, was devoid of name players. The Big Eight-champion Sooners averaged 103 points a game, had already beaten Kansas twice and were eight-point favorites. The Jayhawks weren't intimidated.

"Every time we stepped on the court we felt like we were going to win," Manning, now the Wake Forest coach, said. "It didn't matter who we were playing. That was just our mindset."

After playing at OU's up-tempo pace into the second half, Coach Larry Brown had his Jayhawks slow things down for the last 12 minutes. OU got out of sorts, and Manning made four free throws in the last 14 seconds to secure the win.

The team known as "Danny and the Miracles" remains one of the great underdog stories in tournament history, though Manning has never been comfortable with the nickname.

"Not at all," he said. "Basketball is a team sport. My teammates did so many things to help me on the court, to make the game easier for me -- whether it was getting me open, getting the ball to me in the right spots, defensively being ready to rotate over and help. It was definitely a team victory without question."

Russell turned in one of the most dominant performances in college basketball history in the championship game against Iowa. Officially, he had 26 points and a still-Final Four-record 27 rebounds in the 83-71 win. Media reports also credited him with between 12 and 20 blocks.

The 83-71 victory gave the Dons their second consecutive national title and extended their winning streak to 55 games.

The "Big O" was the king of the triple-double, and you need to look no further than the NCAA Tournament record book for proof. The triple-double was an "unofficial" statistic until the 1980s, but many box scores before that included categories such as assists, blocks and steals.

Four of the top five tournament triple-doubles pre-1986 belong to Robertson, none more impressive than his 39 points, 17 rebounds and 10 assists against Louisville in the 1959 third-place game. The year before he scored 56 points against Arkansas. His 32.4-point average over 10 tournament games ranks third all-time.

The Bruins won a seventh consecutive national title behind Walton's 44 points against Memphis State -- still the most in a championship game. Walton made 21 of 22 shots from the floor, and that didn't include four baskets that didn't count because of the era's no-dunking rule. The 87-66 victory was UCLA's 75th win in a row.

No NCAA Tournament is complete without revisiting Christian Laettner catching that long inbounds pass, turning, dribbling once and swishing his shot from just behind the free-throw line to beat Kentucky in overtime and send Duke to the Final Four.

It was a fitting end to a 31-point performance in which Laettner made all 10 of his shots from the floor and all 10 of his free throws. He was relatively quiet in the national semifinal against Indiana before scoring a team-high 19 in a 71-51 win over Michigan in the title game.