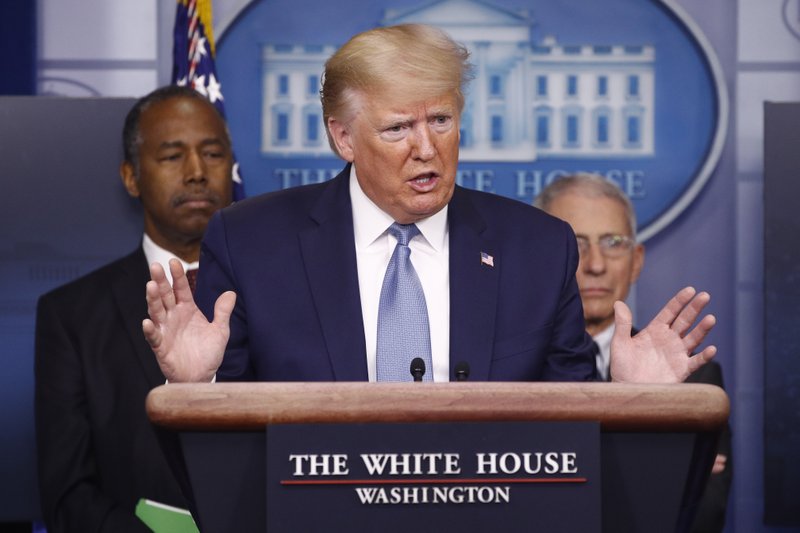 WASHINGTON -- Despite President Donald Trump's desire to reopen the country by Easter, most Arkansas congregations aren't decorating eggs or ordering truckloads of lilies.

Members of the state congressional delegation say they're skeptical that Arkansas churches will be able to meet Trump's "beautiful timeline" for reopening after weeks of coronavirus-related shutdowns.

"I don't see us coming back as a congregation," said U.S. Rep. Bruce Westerman, a Sunday School teacher and deacon at Walnut Valley Baptist Church in north Hot Springs.

"I could envision, maybe, an Easter sunrise service where people are outdoors and spread apart, but I don't foresee us back in the sanctuary in a large group until there's an all-clear signal," the Hot Springs Republican said.

On Tuesday, the president told reporters that he was "hopeful to have America working again by that Easter, that beautiful Easter day."

Trump told reporters that the decision, ultimately, will be based on "hard facts and data."

Officials at the federal and state level later emphasized the importance of fact-driven decision-making.

The Easter reopening date is more of an "aspirational" goal than a hard-and-fast target, said Dr. Anthony Fauci, director of the National Institute of Allergy and Infectious Diseases.

On Tuesday, Arkansas Gov. Asa Hutchinson told reporters that Trump "gives hope, and he's speaking in a hopeful way, it sounds like."

Like Trump, millions of Americans are longing for a resumption of regular life, U.S. Rep. French Hill said.

"I admire the sentiment," the Little Rock Republican said last week. "We all want to get on to our lives of working but also living with covid-19, but I would look to the leadership of our governors around the country in coordinating with the federal government as to what the best timing is for that to happen."

Earlier this month, the Catholic diocese of Little Rock suspended all public Masses through the end of April, including those at St. Andrew Cathedral, where Hill worships.

Given the restrictions, "I don't anticipate being in my home church for Easter Sunday," Hill said.

A return to corporate worship will be welcome, he noted.

"I have enjoyed attending Mass online, and that brings me some joy, but obviously it's not the same thing," he said.

But with coronavirus cases popping up in Craighead County, there may be reluctance to resume in-person worship services.

"I don't think they're going to try and rush it," he added.

During a virtual town-hall meeting Friday, U.S. Rep. Steve Womack portrayed the current restrictions as short-term, but declined to offer an end date.

"I share the optimism of our president that soon this is going to get better," the Republican from Rogers said. "I don't know if it will happen by Easter. We'll let the data [decide]."

It will take more than a government proclamation to soothe the nation's fears, Womack told the Democrat-Gazette .

"The country will reopen and be back to normal when people feel confident that there's safety," he said. "It won't make any difference what you say, what the president says or what anybody else says. ... It will happen when people have confidence that they can congregate together without the fear of being infected with a dangerous virus."

U.S. Sen. Boozman said officials should listen to medical experts, such as Fauci, before easing the restrictions.

In a floor speech Wednesday, U.S. Sen. Tom Cotton made a similar argument.

"America must indeed reopen. When we do, these decisions must be based on local conditions, not an arbitrary, nationwide timeline," the Dardanelle Republican said. "Our governors and mayors understand their local conditions. They can make gradual, rolling, calibrated decisions in a way that is responsible -- when the tools to effectively fight this virus are ready and available."

With Easter just two weeks away on the Catholic and Protestant calendars, Arkansas churches are preparing to mark the holiday.

They just won't be gathering in large numbers to do it.

The switch to online-only worship was "driven by love for our community and love for our church family, and we would never want to put either in harm's way," Loy said. "For us, until the restrictions are lifted by the governor on the amount of people meeting together, we will not consider reopening our doors."

"Just because we don't meet in person doesn't push him back in the grave. He's still risen, and we can still celebrate that he's risen," Loy said.

In a written statement, Catholic Bishop Anthony Taylor said parishes in the Little Rock dioceses remain open for prayer. Those who visit are expected to observe physical distancing, he noted. The Mass is also performed privately.

Public celebration of the Mass "will have to wait until we can gather safely without danger of contagion."

"I am concerned not only about the spiritual welfare of our people but also their physical welfare, and the public celebration of the Mass will not resume until that can be secured -- and the public health experts have made it clear that this is unlikely to occur by Easter," he wrote.

While the Arkansas Baptist State Convention has suspended most of its own events through April, it doesn't determine health-related policies for its member churches.

The Arkansas Conference of the United Methodist Church is encouraging its 620 congregations to re-imagine Holy Week.

Among the options: Embracing technology or ignoring the liturgical calendar.

"While the date for Easter was established by the Council of Nicaea in 325 A.D., there are no rules that say you can't hold your Easter service days, weeks, or even months later. Consider postponing your Easter service until the current regulations of social distancing have eased," an article on the Conference website stated.

"We have strongly, strongly urged churches to plan on not gathering for worship throughout April," he said. "We're asking our churches to help flatten the curve by not having in-person gatherings."

Arkansas Methodists will celebrate the resurrection twice this year, he said. Once on April 12 and again when the coronavirus restrictions are finally lifted.

"We're calling it an Arkansas Easter," Mueller said, predicting that it will be "big and glorious."