From A Hole In The Ground: Silver Dollar citizens eager to celebrate 60 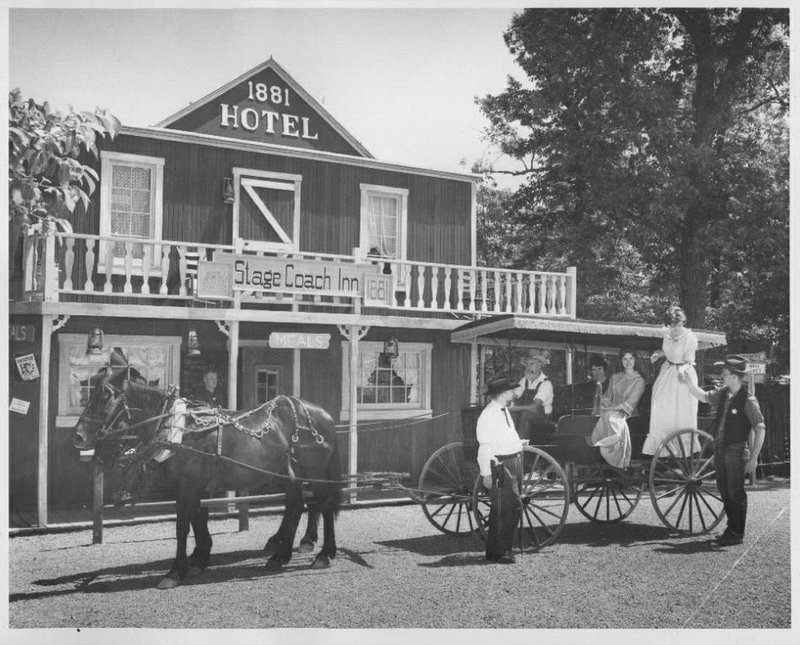 In 1960, the Herschend family opened the village they called Silver Dollar City, complete with a blacksmith shop, a general store, an ice cream parlor, a doll shop, and two 1800s authentic log structures which had been relocated and restored, the McHaffie Homestead and the Wilderness Church. (Courtesy Photo/Silver Dollar City)

Silver Dollar City shouldn't be quiet now. It's spring break season, and the Branson, Mo., theme park should be filled with the laughter of happy parents and the shrieks of excited kids as they streak through the sky on the wooden roller coaster Outlaw Run or drop and spin on the world's fastest, steepest and tallest complete-circuit spinning roller coaster, Time Traveler. The stages should be full of music and comedy, the shops full of blown glass and taffy and the brand-new Rivertown Smokehouse should be filling the air with the mouthwatering smells of ribs, chicken and brisket.

Instead, says park spokeswoman Lisa Rau, the birds singing and flowers blooming are reminiscent of the early days, when the only attraction on the property was a hole in the ground originally called Marble Cave. Herschend Entertainment, Silver Dollar City's parent company, has decided to delay this year's opening because of covid-19.

More about Silver Dollar City’s history and updates on the park opening can be found at www.silverdollarcity.com/theme-park

Updates on the opening of the Showboat Branson Belle, also a Herschend property, can be found at www.silverdollarcity.com/showboat-branson

"The coronavirus crisis is unprecedented, and based on ever-changing developments, we are constantly reevaluating our options and hoping to open in May," says Brad Thomas, Silver Dollar City Attractions president. That doesn't mean the big plans for the Diamond Jubilee 60th Anniversary season have been scrapped, he hastens to add. "But our first priority is the safety of our employees and guests."

The growth in those 60 years would surely be unimaginable to the Osage Indians who first discovered Marble Cave around 1500 or even the adventurers who lowered themselves on ropes 200 feet into the main chamber in the 1880s. It was called Marble Cave because the limestone walls glowed with the lustre of marble, Rau explains, and although no marble was found, Scientific American magazine described the cave in 1885, and word of the natural wonder spread across the country. "Canadian mining expert William Henry Lynch read of the cave, purchased it sight unseen, traveled to the Ozarks and, with his two daughters, opened the cave to public tours in 1894," Rau recounts.

"As automobile travel took over from horse-and-buggy transportation, the creation of roads became important to attractions seeking visitors," she goes on. "Mr. Lynch was dedicated to bringing the road from Branson to his cave, cutting brush and clearing what is now Missouri Highway 76. By the 1920s, the cave was a well-established attraction, and tourists could get there by road or by hiking from a nearby train stop."

It was 1946 when the Herschend family, vacationing from Chicago, discovered what by then had been renamed Marvel Cave.

"When the Lynch sisters decided to retire, they offered the Herschends a 99-year lease on Marvel Cave," Rau continues the story. "Hugo, a Danish immigrant whose world traveling had separated him from his family in Denmark and whose sales work at times kept him away from home in Chicago, was looking for a family business in which he could work together with his wife and sons. In April 1950, Hugo and Mary and their teenage sons, Jack and Pete, took over the management and tours of the cave. That summer, Marvel Cave drew 8,000 visitors."

In 1960, the Herschends opened the village they called Silver Dollar City, complete with a blacksmith shop, a general store, an ice cream parlor, a doll shop, and two 1800s authentic log structures which had been relocated and restored, the McHaffie Homestead and the Wilderness Church.

The park has seen 79 million guests since it opened on May 1, 1960, contributed over $100 million to the state economy, and has employed 40,000 people over the years, including the nearly 2,000 Herschend Family Entertainment employees who work in the Branson area, Rau says. A Congressional Proclamation in 2010 recognized the 1880s Theme Park as "The Home of American Craftsmanship," and Missouri's then-Gov. Jay Nixon described the park as "the Hope Diamond of Missouri tourism."

From natural wonder to international attraction, it all started with a hole in the ground. 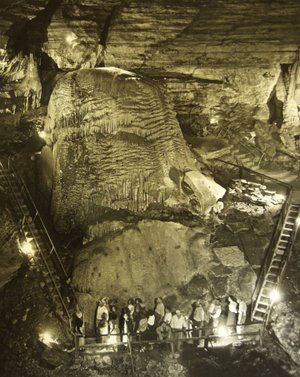 The first tourists to visit Marble Cave came down a ladder in the 1890s. That hole in the ground -- later renamed Marvel Cave -- became the centerpiece of a theme park that has drawn 79 million guests since it opened on May 1, 1960. Silver Dollar City plans to celebrate once the covid-19 concerns have been alleviated. (Courtesy Photo/Silver Dollar City)

Print Headline: From A Hole In The Ground