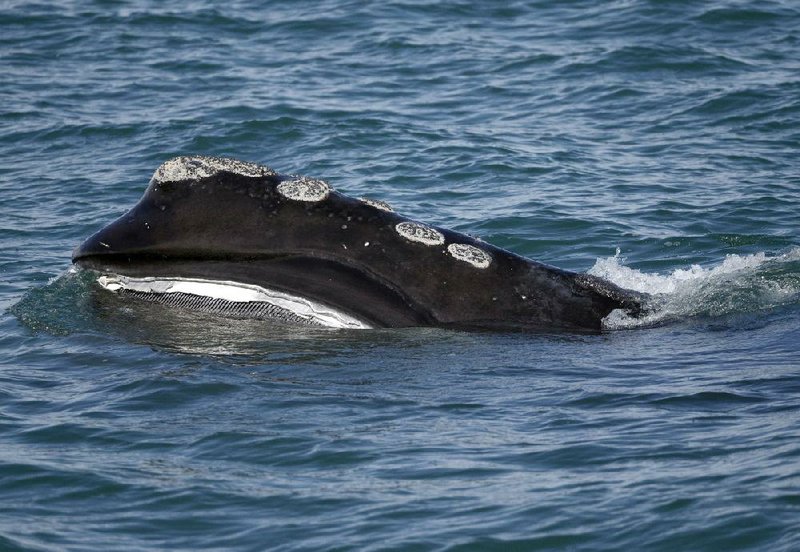 A North Atlantic right whale feeds in Cape Cod Bay off the coast of Plymouth, Mass., in 2018. Ship strikes involving the rare whales are on the rise, researchers say. (AP/Michael Dwyer)

PORTLAND, Maine -- Climate change is imperiling the world's largest animals by increasing the likelihood of fatal collisions between whales and big ships that ply the same waters.

Warming oceans are causing some species of whales in pursuit of food to stray more frequently into shipping lanes, scientists say.

The phenomenon already has increased ship strikes involving rare North Atlantic right whales on the East Coast and giant blue whales on the West Coast, researchers say. The number of strikes off California increased threefold in 2018 -- to at least 10 -- compared with previous years.

When whales are killed in a ship collision, they often sink and don't wash ashore. So scientists and conservationists say fatal ship strikes are dramatically underreported.

Vessels strikes are among the most frequent causes of accidental death in large whales, along with entanglement in fishing gear. Conservationists, scientists and animals lovers have pushed for the International Maritime Organization to step up to protect the whales, but it won't happen without cooperation from the worldwide shipping industry.

For the right whales, which number only about 400 and have lost more than 10% of their population in just a few years, the death toll is driving them closer to extinction, said Nick Record, senior research scientist at Bigelow Laboratory for Ocean Sciences in East Boothbay, Maine.

At least three right whales died from ship strikes in 2019 -- a small number, but still dangerously high for so small a population. All three deaths were documented in the Gulf of Saint Lawrence off Canada, where scientists have said the whales are spending more time feeding as waters off New England warm.

Scientists say the changing ocean environment with global warming is causing right whales and some other species to stray outside protected zones designed to keep them safe from ships.

"When one of their main food resources goes away, it means they start exploring new areas for food," Record said. "And that means they're encountering all new sources of mortality because they are going into these places where they are not protected."

On the West Coast, where there was increase in deaths in whale-ship strikes, scientists reported that the risk of such accidents has been growing in this century as the blue whale population shifted northward in the North Pacific.

The increased ship strikes could necessitate "a broader area where ships don't travel," said Jessica Redfern, an ecologist with New England Aquarium's Anderson Cabot Center for Ocean Life and lead author of a study published in the journal Frontiers in Marine Science in February.

Moving shipping lanes, and the possibility of enforcing slower speeds for large ships, is a subject of much debate among conservation groups, international regulators and the shipping industry.

Shippers say they have made attempts to work with conservationists, such as an ongoing effort to move a shipping lane in Sri Lankan waters to protect blue whales. In a statement to The Associated Press, the World Shipping Council expressed a willingness to keep working to keep shipping activity away from whales, but expressed skepticism about whether slowing vessels would help.

"Reduced ship speeds also increase the residence time of a ship in a given area where whales are active," the council said. "Given those factors, there is some notable uncertainty about how effective reducing ship speeds is in lowering the risk of whale strikes."

Changes to international shipping laws would have to go before the International Maritime Organization, which regulates shipping. The organization has taken numerous steps to protect whales in the past, including agreeing in 2014 to a recommendation for ships to reduce speed to 11.5 mph off the Pacific coast of Panama for four months every summer and fall.

A spokeswoman for the organization declined to comment on the role of warming seas in increased ship strikes. But the subject has caught the attention of the National Oceanic and Atmospheric Administration, which oversees marine issues in the U.S.

Right whales, in particular, began showing a change in migratory behavior around 2010, said Vince Saba, a fisheries biologist with NOAA's Northeast Fisheries Science Center. That happened as warm Gulf Stream water has entered the Gulf of Maine, a key habitat for the whales, he said.

"With that redistribution, the animals have moved into areas where there weren't management rules in place to protect them. In a sense, the deck got reshuffled," said Sean Hayes, head of the protected species branch for the fisheries science center.