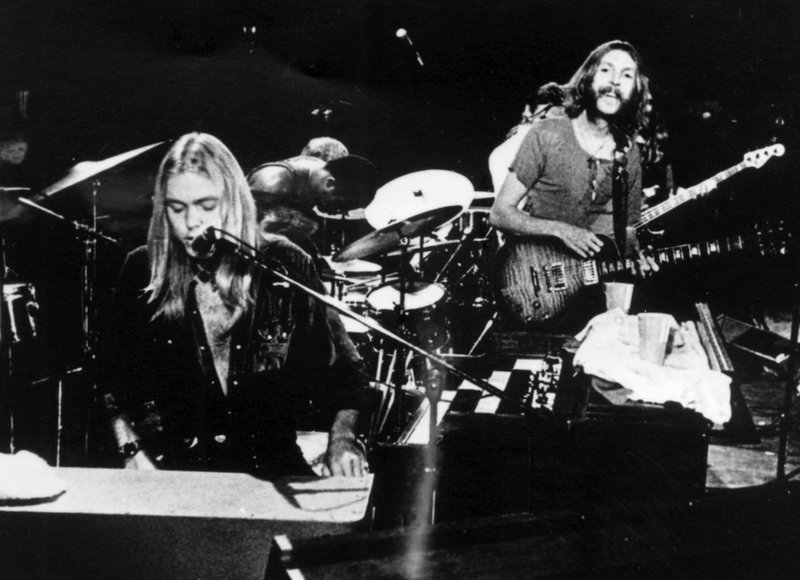 Gregg Allman (left) and Duane Allman of the Allman Brothers Band perform in New York in 1971. (The New York Times)

MACON, Ga. — In the kitchen is the table from H&H soul food restaurant. It's where one of the founding members of The Allman Brothers Band, Dickey Betts, wrote "Ramblin' Man" at 4 a.m. in the early 1970s.

One main room is nearly filled with a pool table once owned by Gregg Allman and Cher. A pane of glass sits atop the dark green felt, with scraps of memorabilia — guitar picks, canceled checks, a letter from Duane Allman to a friend about a recording session with Aretha Franklin — easily perused.

The Allman Brothers Band Museum at The Big House

Upstairs, past a landing lined with a row of framed family photos, is Duane's bedroom, the furniture and flowered wallpaper in the closet offering original pieces of history.

The Allman Brothers Band Museum at The Big House — a handsome 1904-built Tudor house that blends in with the other structures on Vineville Avenue — has existed since 2009 as a living testament to the band that defined Southern rock in the '70s and whose history is stuffed with the kind of tragedy and triumphs usually relegated to soap operas.

Formed in 1969 by legendary brothers Duane and Gregg, along with guitarist/singer Dickey Betts, bassist Berry Oakley and drummers Butch Trucks and Johanny "Jaimoe" Johanson, The Allman Brothers Band utilized Macon as their playground, recording parts of their 1970 album, Idlewild South, at Capricorn Sound Studios and that same year establishing The Big House as the band's commune, which it would remain until 1973.

The tragic deaths of Duane in 1971 and Oakley a little more than a year later — both from motorcycle wrecks three blocks apart in Macon — has only added to the band's lore, and remains a reason why some of the collectibles in the house have been donated by fans.

"Because of the accidents, fans felt compelled to hold on to everything," said Richard Brent, the affable and burly executive director of The Big House Museum. "In the South, The Allman Brothers were their band." 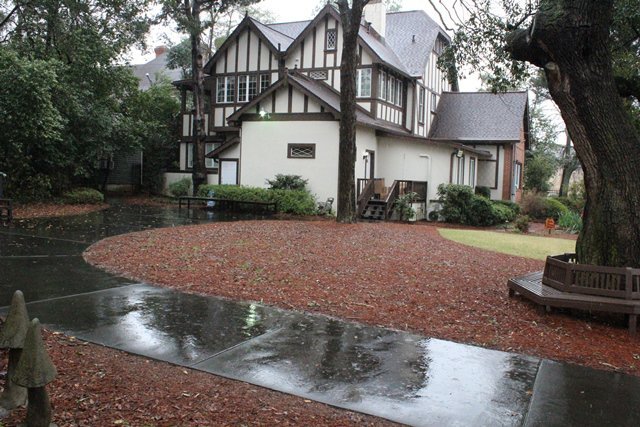 This Tudor house in Macon, Ga., is the home of The Allman Brothers Band Museum at The Big House. (The Atlanta Journal-Constitution/Melissa Ruggieri)

The 6,000-square-foot house contains about 20 rooms filled with artifacts that attract about 20,000 fans annually and internationally. In 1993, spouses Kirk and Kirsten West, who worked for the band in the late '80s, moved to Macon and bought the house. A plaque near the front door of The Big House Museum explains that it was their "dream" to turn their home into a bastion of preservation of Allman Brothers Band memorabilia.

Among the treasures: instruments and clothing; Trucks' last drum kit before he died in 2017; the poignant, hand-scrawled lyrics of "My Only True Friend" — one of Gregg's last compositions released posthumously on his 2017 Southern Blood album; even a thank you letter from then-presidential candidate Jimmy Carter typed on campaign letterhead to Jaimoe.

It's those tangible tidbits that prompted friends Bill Taylor and Scott Monroe and their wives to drive three hours from their rental property in Hilton Head, S. C., for a pilgrimage to The Big House.

"[Coming here] is on my bucket list," said Taylor, clad in a 1973 "Summer Jam" Allman Brothers T-shirt and baseball cap. He pulled a faded, partially torn ticket from his jacket pocket — a keepsake from the band's September 1975 show at Roosevelt Stadium in Jersey City, N.J. "I grew up with the Allmans."

Taylor and Monroe — who live the rest of the year in Montgomery, N.Y. — attended at least one of The Allman Brothers Band's fabled Beacon Theatre concerts every year they were performed between 1989 and 2014 (the Allmans played more than 230 shows at the venue).

On March 10 in New York, the band was celebrated for a milestone with a blowout concert at Madison Square Garden.

The concert was sold-out — $1 from every ticket benefited The Big House Museum, which operates as a nonprofit.

While Macon will always be Allman HQ — Gregg, Duane, Oakley and Butch Trucks are buried less than two miles from the museum in an impressive fenced-in shrine at Rose Hill Cemetery — New York was considered the band's spiritual home.

They recorded their 1969 self-titled debut in the city, turned their Beacon Theatre residency into a mystical journey for fans and, said Brent, "Before Butch died, he talked about doing one more show at Madison Square Garden."

This golden anniversary was also recognized with the release of Trouble No More: 50th Anniversary Collection, a boxed set of rarities, unreleased tracks and live performances.

Duane Allman's fabled 1957 Les Paul Goldtop, which he used on the first two Allman Brothers Band albums and during his "Layla" session with Eric Clapton in 1970, was bought last year at an auction for $1.25 million. The buyer agreed to split custody of the instrument with The Big House Museum, where it has been on display. It is back with its owner for the next several months but will return to the museum.

"It's pretty awesome that the Allmans have touched so many people for so many years," Brent said, as he looked around at the mounds of memorabilia filling each room.

Taylor, the super-fan finally able to check the museum visit off of his bucket list, unintentionally proved Brent's point as he prepared to depart with his wife and friends.

He pulled the yellowed and tattered concert ticket from his pocket again, walked into the room with the pool table and slipped it under the glass — an old memory for a new generation to relish.