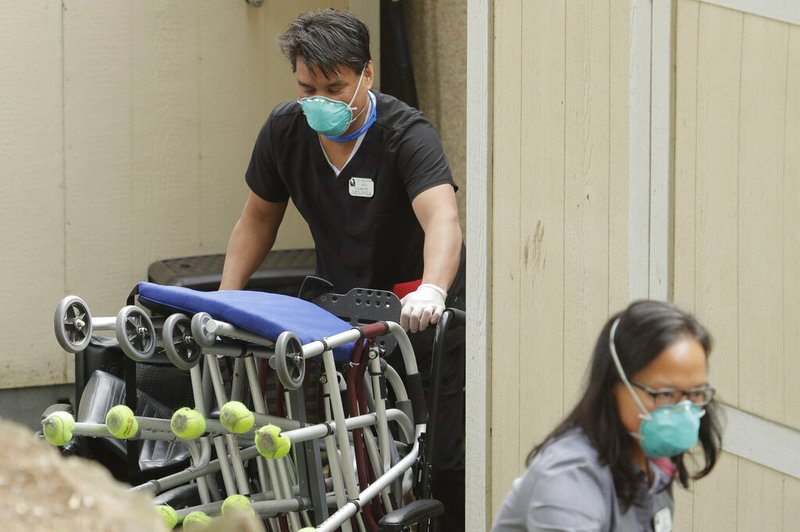 Workers at Life Care Center in Kirkland, Wash., near Seattle, wear masks as they move walkers and other mobility aids that have been cleaned out of the center and into a portable storage unit, in this March 17, 2020, file photo near Seattle. (AP / Ted S. Warren )

Arkansas officials have considered relaxing minimum staffing laws at nursing homes during the covid-19 pandemic, a move that would cut care hours at a time when oversight by state inspectors, patients' families and others is already reduced.

No decisions have been made, but the idea became "part of the conversation" after it surfaced during conference calls with nursing home representatives, state Department of Human Services spokeswoman Amy Webb said when asked whether suspending the staffing laws had been considered.

The deliberations over nursing home staffing laws, which hadn't been previously reported or announced, highlight the extraordinary measures Arkansas officials are considering during the emergency.

"This would be a very, very big decision if we had to make it," Webb said. "We are not there, and we know the implications of staffing and how important staffing is. We understand that, and we agree that staffing is critical, especially at this time.

"It is part of the conversation. It does not mean we're moving forward with it."

"Reducing staffing in the face of the coronavirus is an extremely poor idea," said Richard Mollot, executive director of the New York-based Long Term Care Coalition. "If anything, staffing should be increased at this time to protect both residents and staff."

Advocates said short-staffing can increase the risk of infection because nurses and nursing assistants have heavier workloads and feel rushed while making their rounds.

Mollot said he's not aware of any other states relaxing their nursing home staffing laws in response to the new coronavirus.

Gov. Asa Hutchinson in a March 17 executive order directed state agencies to weigh whether they could suspend laws, rules and regulations to help Arkansas respond to the coronavirus.

It was this context that produced the suggestion to reduce minimum nursing home staffing, Webb said, adding that "we are nowhere near a point where this would be something that we would move on."

"We have definitely discussed lots of options and methods for addressing this situation," Bunch said. "We are doing our best to comply with the requirements and provide care around the clock to our patients."

Any decision would be made by Human Services Secretary Cindy Gillespie in coordination with the governor's office "as appropriate," Webb said.

Federal rules, which do not set specific staffing ratios nationwide, require that staffing be sufficient to meet residents' needs.

Part of Hutchinson's response to the covid-19 crisis has been to expedite licensing of hundreds of registered nurses to better staff hospitals and clinics treating the sick. The state will also spend $55 million to improve wages for nurses and health workers, including at nursing homes, Hutchinson has announced.

Human Services Department officials are talking daily with various Medicaid provider groups, including nursing homes, about their struggles and whether there is regulatory relief that could help, Webb said. Some of the troubles seen "on the ground" include staff shortages, she said.

Public health officials nationwide have expressed particular concern about the spread of covid-19 in nursing homes.

Elderly people and those with underlying medical conditions are at greater risk of dying from the disease than the general population, health experts have said. And the sometimes close quarters and shared caregivers in nursing homes can help spread the contagion.

At least 42 residents and 11 staff at four nursing homes -- including 37 residents at Briarwood Nursing & Rehab in Little Rock -- have contracted the virus, according to the Arkansas Department of Health.

Last week, the Centers for Medicare and Medicaid Services suspended all inspections of nursing homes except for the most serious level of complaints and "targeted infection control."

Family visitation has also been banned.

Designed to reduce the risk of covid-19 spread, the safeguards have walled off most independent, routine looks inside nursing homes.

"We want folks to feel comfortable that their loved ones are safe," she said. "This is uncharted territory for everybody."

"The addition of waiving already low staffing standards [would be], frankly, a recipe for disaster for residents and families in Arkansas," said Mollot, the advocate from New York.