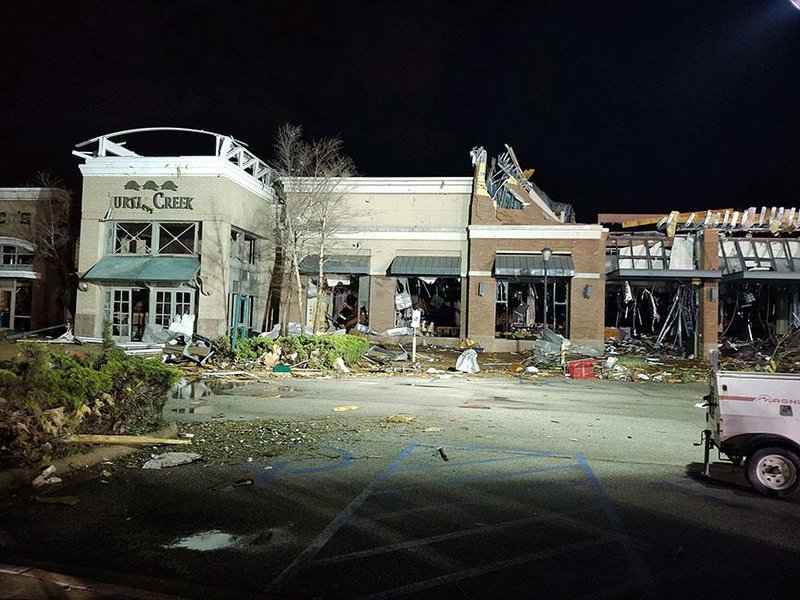 Damage is visible at the front of the Mall at Turtle Creek in Jonesboro on Saturday night after a tornado struck the city. At right is a Barnes and Noble bookstore. (Arkansas Democrat-Gazette/Joe Flaherty)

Jonesboro Mayor Harold Perrin ordered the 7 p.m. curfew for Saturday, city spokesman Bill Campbell said, adding that it will be in effect in coming days for as long as it's needed.

"We got too many people gawking around outside," Campbell said. "If you want to help us, stay at home."

Jeff Presley, director of Jonesboro E-911 center, said the tornado did major damage at the Mall at Turtle Creek and at Jonesboro Municipal Airport.

"Police are doing search and rescue on vehicles right now," Presley said Saturday afternoon. "We have red lights out all over town, as well."

No deaths had been reported as of Saturday afternoon, but six people were reported as injured.

Five of the injured were taken to St. Bernards Medical Center in Jonesboro. Spokesman Mitchell Nail said two were admitted and in stable condition, while the other three were treated and released.

Presley said the E-911 emergency response facility also received reports of multiple gas leaks in subdivisions around the city and that a train had been blown off the tracks at Airport Road.

"We are getting a hazmat team together to respond to the situation," he said shortly after the tornado struck.

Campbell said National Guard troops were on their way to Jonesboro, and multiple law enforcement officials from across northeast Arkansas were providing assistance. Churches were setting up shelters Saturday night.

"We got a lot to secure," he said "This is a search-and-rescue mission being conducted across the city, and we are racing against the dark."

According to Melody Daniel, spokeswoman for the Arkansas Office of Emergency Management, Marvin Day, the county judge for Craighead County, has verbally declared a disaster in the area, allowing the county to ask for resources from the state.

"I got officers from 10 counties coming in, and we have called up our reserve units, as well," he said. "We are shutting down traffic because we don't want people out right now."

The Mall at Turtle Creek received heavy damage. A Barnes and Noble store was gutted, with the interior exposed where the front windows of the store had been blown away. Other stores -- including Dillard's; Best Buy; and Bed, Bath and Beyond -- were also damaged.

According to Jonesboro police spokeswoman Rachel Carmack, some people sheltered inside the Target, Dillard's and Barnes and Noble stores before the storm hit and were able to escape afterward without any injuries.

First responders set up a command post in the parking lot outside of the mall Saturday night.

"We're here to protect life and limb and the property," said Sgt. Lyle Waterworth with the Jonesboro Police Department. "We won't be shutting down. We'll likely be here for at least the next few days. We've got people surveying the damage and out checking the homes for anybody who may be injured."

The National Weather Service in Arkansas confirmed that a tornado passed through Jackson County and Craighead County before moving into Greene County. Video from an Arkansas Department of Transportation camera showed the tornado on the ground in Jonesboro.

Jeff Hood, a meteorologist with the National Weather Service in North Little Rock, said the storm appeared to gain strength as it entered Craighead County just before hitting Jonesboro.

"It's really going to take some folks on the ground from our office and likely from the Memphis, Tennessee, National Weather Service office to really get an idea of what level of damage [there is]," Hood said. "Just based on pictures shared online, it looks like the tornado started out in Jackson County -- in our area -- it wasn't quite as intense as it approached and moved through Jonesboro."

A series of stores and restaurants along Red Wolf Boulevard were damaged, with large pieces of debris scattered around the parking lots and damage evident to several vehicles next to an Academy Sports + Outdoors store.

A Cheddar's Scratch Kitchen nearby appeared to have received extensive damage, and a vehicle sitting near the wall of the restaurant was destroyed.

Around 7:30 p.m., Britney McKee, 34, was working outside Gigi's Cupcakes, where she is the manager. She and Josh Utley, 25, were collecting refrigerated goods like butter from inside the store before they spoiled.

McKee said she rode out the storm from inside the bathtub of her Jonesboro home about 3½ miles from where the tornado struck. She said the extent of the damage in Jonesboro became clearer as she drove to the store.

"I was just freaking out all my way here," she said.

She pointed to where a utility pole appeared to have been pulled out of the ground. "It went through the parking lot," she said of the tornado. "I mean, there's two-by-fours stuck through the brick, and some of our front windows are busted."

She didn't check to see if there was damage to her home in her rush to get to the store. "I mean, look at Cheddar's. That could have been this whole building taken out."

The Arkansas State University campus received no substantial damage, university spokesman Bill Smith said, adding that it appeared that only some fences on the tennis court were harmed.

"When it was over, I did some recon around the campus, and I could see the damage at the airport, and it was massive," he said.

Smith said he, along with some staff members and students, were on campus at the time of the storm. He said most of the students took shelter in the student union.

"We actually couldn't see it because the rain and wind were blocking it," Smith said "It's always a little harrowing when a situation like this happens. ... This tornado was moving very fast. It developed fast, dropped down and was out of here before people even knew it."

"Restaurants were crushed by it, and the mall was damaged. The Best Buy roof has been caved in, but a lot of these places weren't open or only doing curbside service with minimal staff," he said. "A full mall on a Saturday afternoon ... this could have been much different."

Smith said the campus will be open and available for parents and students who are trying to move out of the dorms.

Pam Knapp-Carver, executive director of the American Red Cross, Northeast Arkansas Chapter, spent the night roving among the first responders, asking what they needed in order to do their jobs.

"I'm just gathering information to see what they need and what we can do," she said. "I've got 50 million things going at the same time."

Because the tornado crossed coverage areas, teams from the National Weather Service office in Memphis will be collaborating with the North Little Rock-based teams to determine the tornado's path.

"We have boundaries between our offices in our respective coverage areas -- our county warning areas, as we call them," Hood said. "And the furthest east we go in northeast Arkansas is Randolph, Lawrence and Jackson County."

Hood said that aside from the damage in northeast Arkansas, he had received no additional damage reports from Saturday's storm system.

A tornado warning was issued Saturday afternoon for Jackson County. An official with the Jackson County Office of Emergency Management said late Saturday that workers were too busy to comment about any damage in that area.

Some photos from the Jackson County Office of Emergency Management's Facebook page showed a destroyed structure, debris and a damaged roof. The weather service said law enforcement officials had reported "several power lines down and a few roofs missing off of homes between Algoa and Amagon."

Daniel, with the state Department of Emergency Management, said the county judge's verbal disaster declaration in Craighead County "means that they probably, emphasis on probably, think that they have enough damage that it's going to exceed the county's capability to overcome."

Perrin said contractors for the city will begin to clean up today, but he acknowledged the extensive damage to the shopping mall.

"It's going to take a long time to get this back," he said.

Elliott said it was unclear how many homes were damaged. He praised law enforcement officials and first responders from surrounding areas for arriving to help. Some of them traveled from 40-50 miles away.

"We didn't call; they just knew Jonesboro got hit. They loaded up and hauled butt here," he said.

That was also the case with medical personnel.

When the storm hit, doctors and nurses from all over the region flocked to the hospital to help with the possible influx of injuries, Nail said.

"It was amazing to see how they all just showed up," Nail said.

The hospital's emergency room entrance was guarded by multiple security officers, and signs were posted on hospital doors, pillars and windows warning visitors that they will be screened for the coronavirus if they enter the premises.

Patients who show symptoms of the virus through online or call-in screening are sent to an off-site clinic for testing. Nail said the tornado response combined with the ongoing covid-19 issue was definitely surreal.

"Thankfully there were very few injuries and no deaths from the storm," Nail said. "I'm worried about our first responders out there combing through the wreckage, searching for the injured. We are here for them."

Gov. Asa Hutchinson posted Saturday afternoon on social media that he was paying close attention to the tornado reports in Jonesboro.

"Just praying all is safe," he said.

The last tornado that did extensive damage in Jonesboro occurred in the early 1970s, when a twister struck a school in the city, Campbell said. 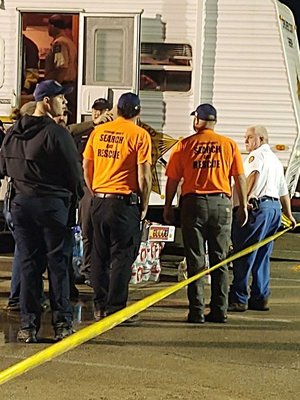 First responders gather Saturday at a command trailer in Jonesboro on the parking lot of the Mall at Turtle Creek, which was heavily damaged in Saturday’s tornado. Authorities said they would likely be there for at least the next few days. (Arkansas Democrat-Gazette/Jeannie Roberts)