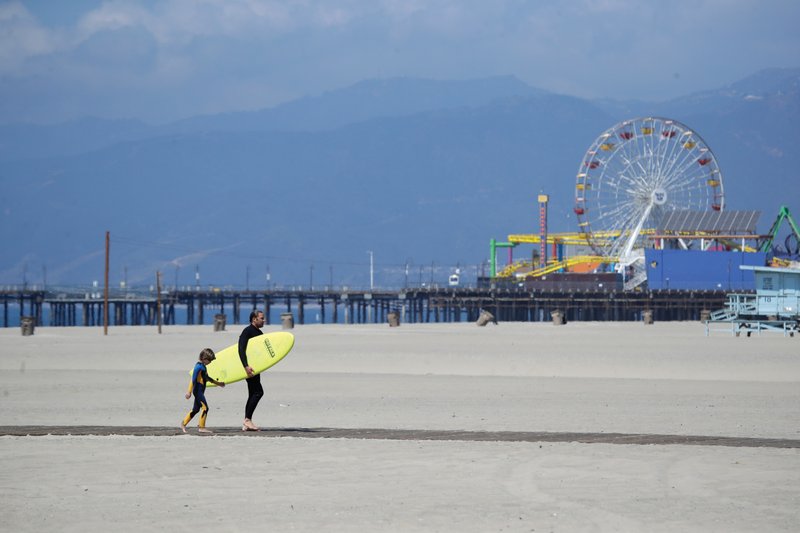 WASHINGTON -- A gun rights group is cheering the Trump administration's designation of the firearms industry, including retailers, as part of the nation's critical infrastructure during the coronavirus emergency.

The designation by the federal Cybersecurity and Infrastructure Security Agency is advisory. The agency notes that the designation does not override determinations by individual jurisdictions of what they consider critical infrastructure sectors.

The firearms industry was not part of the federal agency's original list of critical infrastructure issued just over a week ago. The designation in an update released Saturday follows a brewing legal battle between gun rights groups and California officials.

The group Gun Owners of America said in a statement Saturday that it is encouraged that the Trump administration is not ignoring what it calls "the ability to protect yourself" during the emergency stemming from the pandemic.

Gun rights groups filed suit last Friday after the Los Angeles County sheriff closed gun stores in the wake of California Gov. Gavin Newsom saying that each of the state's 58 counties could decide for themselves whether to list firearms dealers as nonessential businesses that should be subject to closure while the state seeks to limit the spread of the virus.

The lawsuit claims that the designation violates the Second Amendment, but officials cite a public health issue.

The state has also established a $2 million fund through the Michigan Department of Environment, Great Lakes, and Energy to help provide funding to local communities to help reconnect homes to their water supplies.

Water shutoffs have been a hot-button issue in the state and especially in its largest city, Detroit, where more than 127,000 have been performed since 2014.

"This is a critical step both for the health of families living without a reliable water source, and for slowing the spread of the coronavirus," Whitmer said. "We continue to work to provide all Michiganders -- regardless of their geography or income level -- the tools they need to keep themselves and their communities protected."

Water advocates and elected officials have long argued that it's impossible for families to follow the hygienic coronavirus standards outlined by the Centers for Disease Control and Prevention and the World Health Organization when they don't have water in their homes.

The order is effective for the duration of the covid-19 emergency.

Rhode Island Gov. Gina Raimondo repealed her order that New Yorkers coming to the state be singled out for covid-19 quarantine and replaced it with a requirement that all out-of-state travelers isolate for 14 days.

The new order essentially ends New York as a specific target. It reads in in part: "Any person coming to Rhode Island from another state for a non-work-related purpose must immediately self-quarantine for 14 days."

Cuomo said he spoke with Raimondo and was pleased she decided to rescind the order.

"I thank her very much for reconsidering," he said. On Friday, Raimondo established highway checkpoints where state police pulled over passenger vehicles with New York plates. In an email Sunday, her spokesman, Josh Block, said, "The informational stations along the border are still in place. The Governor will address new guidance for these stations in today's briefing."

The Georgia Sea Turtle Center on Jekyll Island has been streaming live educational videos featuring insights from its turtle experts daily since March 19. The series aims to help children keep learning while schools are closed during the coronavirus pandemic.

Lessons so far have included segments on the different sea turtle species found in coastal Georgia and a virtual field trip to the marshes of Jekyll Island. 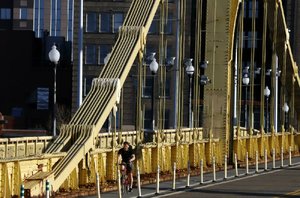 Photo by AP
A man rides his bike across the Roberto Clemente Bridge on a warm Sunday in downtown Pittsburgh. (AP/Gene J. Puskar)

Called "Scute School" after the name for the bony plates that form turtle shells, the series is being streamed on the Facebook pages of the Georgia Sea Turtle Center and Jekyll Island. New installments are scheduled through at least April 10.

The sea turtle center is closed to in-person visitors because of the virus outbreak. No date has been set for it to reopen.